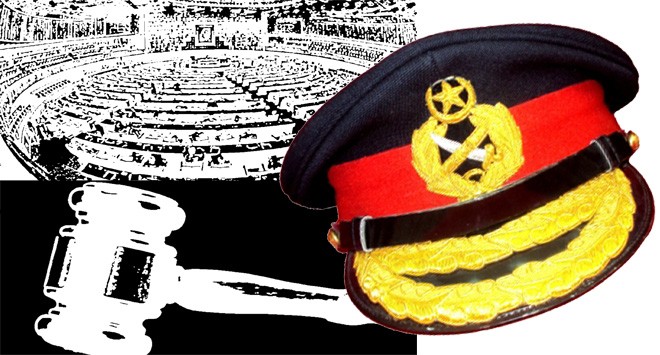 The United Kingdom does not have a written constitution but still seems to be governed under a set of well-entrenched customs and conventions. It has been, at least for the past 323 years, a parliamentary form of government and seen fairly smooth royal transitions, and fairly accommodative and honourable executive and judicial administrations.

Pakistan has had several written constitutions -- 14 according to Charles Kennedy -- in its short history of 67 years. Yet, parliaments, presidents, prime ministers, judges, sometimes even military dictators have all have been found prone to disappearing with little or no notice. This shows that it doesn’t mean much to call a written and signed document a Constitution, and what really counts are a set of de facto "constitutional" arrangements, backed by sufficient trust and/or force. These ensure fairly predictable, dynamic, and harmonious relationships between the largest integral components of a constitutional system over long periods of time.

In their totality, these rules may be referred to as a "constitutional settlement".

Pakistan’s tendency to alternate between civilian and military rules every decade or so means that it has failed to find its constitutional settlement even 67 years after its creation. It seems the time for such a settlement has finally come.

This new settlement may tentatively be described as the irrevocable advancement of our constitutional system from the age of a Janus-faced sovereign to one where the sovereignty is shared by multiple functionally-independent institutions of the state, which is very much in line with our constitution as it exists today. The institutions currently notable in this regard are the following four -- parliament, superior judiciary, media and military.

Parliament: The parliament that came into place in February 2008 soon showed its resolve to keep its distance from the military by refusing to validate the latest constitutional deviation, that is, the declaration of national emergency on Nov 3, 2007 by then President and Chief of Army Staff General Pervez Musharraf.

Apart from a couple of anomalies, none of the opposition parties attempted to create a constitutional crisis for the ruling party. This politics of compromise and tolerance played a huge part in ensuring that, despite being touted as five torturously corrupt years, the PPP government achieved the unprecedented feat of completing its tenure. It smoothly transferred power to the PML-N after the holding of fairly free and fair elections under a caretaker setup.

Since it came to power in May 2013, PML-N has also been receiving similar tolerance from mainstream opposition parties.

Superior judiciary: The Supreme Court of Pakistan not only spearheaded the movement for transition from military rule to democracy but also ensured that it maintained direct and ongoing checks not only on legislative and executive actions but also on matters of high politics pertaining to the parliament, military or both.

This has resulted in judicialisation of constitutional disputes, which is an improvement on the previous tendency of elected assemblies to be dissolved in such situations.

Indeed, it may be argued that just as the parliament’s power is its purse and army’s its weapons, judiciary’s substantive powers now partially vest in the private media houses.

Army: Ever since Musharraf’s departure, the military has not lost any significant ground to politicians in terms of its institutional integrity and influence. However, the rise of the superior judiciary and free press, as noted above, has changed the picture significantly. Free press is a well-known irritant for military rulers, but coupled with an independent judiciary, it’s a lethal and persistent weapon capable of threatening away palace coups if nothing else.

More importantly, the army has lost the only perennial purpose of its existence -- war with India. Inevitable global movement towards regionalism a la European Union and the evident futility of war between nuclear armed nations has left Pakistan and India with no choice but to help strengthen each other through trade and cultural exchange.

Thus, the politics of compromise and tolerance, the rise of the superior judiciary in conjunction with private media houses, and the change in Pakistan’s geo-political relationship with India are three new forces that seem well-placed to deny the military any leverage or legitimacy to disrupt democratic rule in the foreseeable future.

Further, essential mechanisms are already in place to roll out two more structural changes that will directly add to the legitimacy of the democratic setup.

First, even though little headway seems to have been made over the devolution of residual powers to the provinces under the 18th Amendment, it is obvious that it will be next to impossible to reverse this formal declaration or indefinitely avoid its administrative consequences. Further, even a mildly activist judiciary would ensure the implementation of these massive changes in the federal structure in due course of time.

Second, the hitherto little-known institution of the Auditor General is set to achieve its position as a functionally-independent institution of the state. The abolition of secret service funds of various executive departments, which had existed at least since 1947, by the first budget of PML-N; the Supreme Court’s declaration soon after that every penny expended from the national treasury must be accounted for and audited; superior judiciary’s pro-active approach to administrative corruption as already noted above; and the highly prominent role played by the bi-partisan Public Accounts Committee of the National Assembly in recent years promise that the Auditor General now has functional independence, operational scope, and institutional recognition necessary for it to ensure a semblance of financial probity in governmental expenditure, and in turn add to the legitimacy of the elected government.

The rise of the new institutions and institutional norms as noted above will push the Pakistani state towards democratic stability, increasing political accountability, mature relations between different functionally independent state institutions, and a chance for non-Punjabi provinces to design their own identities. This may well be the "constitutional settlement" that Pakistanis have been waiting for since Independence.

In this regard, the trial of General (r) Pervez Musharraf on charges of High Treason carries immense symbolic and functional significance to test the power and legitimacy of the present constitutional setup. Indeed, the outcome of the trial may even be seen as a decisive vote of confidence, or lack thereof, for a constitutional settlement based on principles of democracy, accountability, and rule of law.