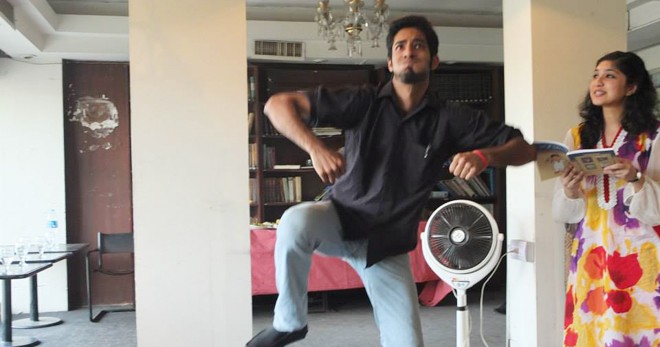 Participants ended up looking cute and endearing when asked to act like a mouse at the Story Telling Workshop held at Nairang Art Galleries by Kitab Publishers last week.

A high-end publisher for children, they have published books by Musharraf Ali Farooqi, Mehdi Azer Yazdi and the all-time favourite poems of Tot Batot by Sufi Tabassum.

Last week’s workshop was conducted by Musharraf Ali Farooqi, who has held many storytelling sessions for children in Lahore. The story he chose for the session was about Moochhander, the iron man, who has the longest and the magical moustaches ever. This story has appeared in The Amazing Moustaches of Moochhander the Iron Man and Other Stories.

Originally, Farooqi had written the story in English, but the version presented in the workshop was in Urdu, translated by Zeenat Hisam. It is immensely readable.

The storyteller’s medium is a good story that can be read to an audience with enough drama so that it captivates them. An important part of reading to children is connecting with them. And, so far, most Pakistani children relate wonderfully well to Urdu stories than they do to English.

If a story is read in English, children sometimes do not get the humour and become distracted. One may argue that for a certain class of children, English is their first language. Still, their connection to Urdu, a language so immersed in our culture, is strong.

One of the first tasks for the participants in the workshop was to do a narration that was improvised and not just follow the text. For one thing, it is quite impossible to recite a story word for word unless one has had a lot of practice. But more importantly, while a recitation is in progress, several interesting ideas keep springing up in one’s own mind and it seems like a sheer waste not to incorporate them into the story.

Moochhander’s moustache is so long that people can hang from it and he can swing with it from a ceiling. It is magical. But the story does not tell us where the magic comes from. So, during the workshop, in one improvisation, a workshop participant said Moochhander was actually Rapunzel’s son.

Also, while listening to a story, children may go off on a tangent. Therefore, it is a good technique to incorporate questions into a story so the storyteller may not lose the narrative thread.

With young children, sticking with time limits is not always possible. The conductor set a 30-second limit for every participant to retell the story. A few participants who were long and winding in the beginning, got the hang of it later and were able to retell a story in the set time.

Musharraf Ali Farooqi gave an interesting pointer on adding voice effects for younger learners. Young preschoolers hardly take any interest in a story until the sound effects entrap them into listening, the noise made by someone’s fall, a loud cry of surprise, lots of rats all talking at once. These noises not only capture children’s imagination, they also stay in their memory for a longer time than a mere narration.

Another useful pointer he mentioned was about giving the right message without changing the textual significance. Some folk stories can depict villainous people or portray characters in an inappropriate manner. In such a situation, it becomes important that the message going out to children is appropriate and not distorted. It requires ingenuity to provide a positive message without changing the text but it must be done.

Given this context, improvising provides great help to inventive storytellers.

The initiative to tell stories to children is an excellent one, as eventually, this is what will lead them to become readers. In Pakistan, people normally complain about children, or the new generation, not reading enough. If one catches them early on, the habit can be easily developed.

Workshops like these will provide a great avenue to all young storytellers. Most importantly, all the participants enjoyed telling stories so much that it became a festive, lively and animated workshop.