Newsroom is a parallel world 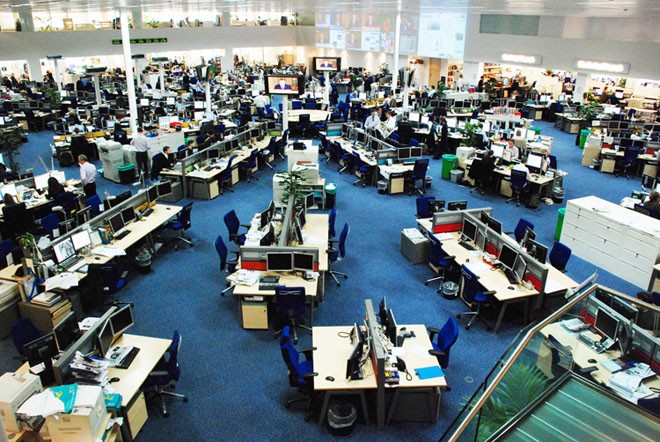 I have been a sub-editor for over six years now. When I was hired, I was really excited. It felt great -- simply, to be in a newsroom where you received reports of all things important. Newsroom was like one place where I felt I had a finger on the pulse of the readers.

Slowly and gradually, as I understood my role in the scheme of things, a ‘reality’ dawned on me. I began to realise how a sub-editor has his share of pains and gains, as anyone else does in any other profession. And, of all the gains being a sub-editor brings, developing the sensibility of a language and learning how best to edit someone else’s script is the most satisfying.

Just how and why I ended up in this profession -- and why I am almost near the exit point now -- is a long story. It is very difficult to fully make sense of the chaotic impressions and ideas that constitute my experience so far.

At first, a sub-editor feels excited to be in a ‘privileged’ position where he or she can correct the language mistakes of others. The excitement lasts only about six months. Then you start having nightmares. With eyes fixed on computer, you are cursed to edit six thousand words (on an average) of little or no sense, in a matter of a few hours of your workday.

Reports are written in such a monotonous style that you can tell the mistakes a mile off -- literally.

After spending a few years in the newsroom, I can say headlines are easily ‘crafted’ -- in hackneyed phrases, with slight variations here and there. This may be because the socio-political events have a certain recurrent pattern or because the desk hands are not creative enough.

Only if sub-editors were paid better and given credit for the ‘cleaning’ work they do, the newsrooms would cease to be dark rooms.

My colleagues often dub the newsroom as a dark room. They give various reasons for that. For instance, the fact that working on the desk means you are living in s parallel world: when it’s time to socialise (in the evenings) or have a good night’s sleep, you are stuck in the newsroom till sometimes the wee hours. When your day is night for others and vice versa, you are naturally cut off from the mainstream.

Ideally speaking, editing is a very sensitive job. Editors can make or mar the impact of a story. Consequently, they can also always end up hurting the reporter/writer by making changes in the original script which, in the case of most English dailies in Pakistan, is atrocious (English not being most people’s first language).

A newsroom is supposed to be the backbone of a newspaper. It is as important as a fashion designer is to a piece of cloth. Desk editors not just edit news reports to deserve the attention of the readers, they also ‘assign’ each report its ‘due’ place on a page. What is carried where, and in how many words, is determined by the importance a news item has. But given the advertising factor and how a newspaper has to often play up or down certain issues according to the stakes involved, takes away the power of a desk editor.

Eventually, a sub-editor on a desk remains unsung. It took me some time to fully realise this fact. Only if sub-editors were paid better and given credit for the ‘cleaning’ work they do, the newsrooms would cease to be dark rooms.

Newsroom is a parallel world