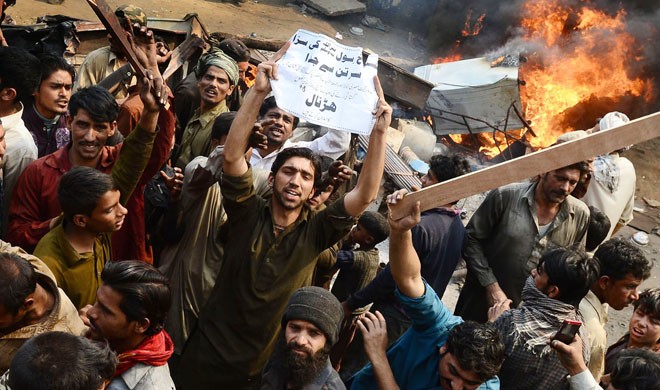 A year after the burning down of Lahore’s Joseph Colony, Sawan Masih was sentenced to death by a trial court on March 27, 2014. The court found him guilty of having uttered one sentence which "defiled the sacred name of the Holy Prophet", though the judgment reproduces that sentence about half a dozen times.

The Punjab provincial government which made sure Christian residential quarters were rebuilt in a matter of days also ensured that Sawan Masih was not saved from conviction and sentence. Or so it seems. The police and the prosecutors found nothing wrong with the complaint and the evidence despite there being plenty of circumstantial evidence to put the complainant’s claim in doubt. The Supreme Court had also issued a suo motu notice over the burning of the colony but was under such tremendous pressure that it was ‘pleased’ to observe that "the learned trial court would proceed" with Masih’s case in accordance with law.

It is likely that Masih’s conviction will be rejected by the appellate courts. But by the time he is declared innocent, he would have spent many years in prison. Aasia Masih was convicted in 2010. Her appeal is pending in the high court. On the last three hearings, no proceedings could take place. If and when her conviction is set aside, she would have spent a few more years in the prison (she has already spent about five years behind bars) and it will be impossible for her to stay in her own country. Junaid Hafeez, a teacher and candidate of MPhil at Multan’s Bahauddin Zakaria University, is rotting in prison over alleged blasphemy on the Facebook. No lawyer can defend him without risking his own life. And there are scores of such pre-trial and under-trial cases where people are languishing in jails.

Pakistan’s blasphemy laws seek to protect the sacred by enforcing the respect due to the divine. Laws are supposed to be enacted to serve some public good. What good are the blasphemy laws serving? Provisions like 295-B and 295-C of the Pakistan Penal Code, for instance, are justified on the ground that the state has an interest in preventing private citizens from killing alleged blasphemers. The question arises whether Sections 295-B and C (PPC) and other such provisions introduced in the 1980s have achieved the declared objective of preventing vigilante justice?

There’s no evidence to suggest that vigilante justice was at work before the harsh provisions like 295-C and B were introduced. A list compiled by Mufti Mohammad Shoaib Haqqani of Madrassa Banuri Town mentions 36 cases of killings since the year 3 Hijri (625AD). Out of those 36 killings, 18 cases are claimed to have been recorded between 1916 and 1994 throughout the subcontinent. The authenticity of these incidents of killings is highly doubtful except for two i.e. Rajpal who was killed by Ilm Din in 1927 and Niamat Ahmer who was killed in 1994. In the latter’s case, 295-C was on the statute and a case had been registered. In fact, the justification for 295-C was belied by Ahmer’s killing.

The real motivation behind most blasphemy cases remains settling personal scores, a pattern identified over the last 22 years when Niamat Ahmer was murdered. Earlier in 1990, the Federal Shariat Court had declared death as the mandatory penalty under 295-C.

Since then the list of accused killed for alleged blasphemy continues to expand. Those who perish in the prisons on charges of blasphemy continue to multiply. The under trial prisoners remain at the risk of losing their lives. Those who support them also run the risk of losing their lives as it happened in Salmaan Taseer’s case. Those who are declared innocent by the superior courts cannot continue live in the country. Towns are set on fire on the slightest of provocation.

If there ever was any justification for these laws, it lost its validity long ago. In most cases, the accused are likely to be acquitted because of the false nature of complaints. The courts are unduly burdened by frivolous litigation and under pressure to convict the innocent.

Each blasphemy case takes away energies and resources of criminal justice system which would otherwise be used for the prevention of serious offences like kidnapping and terrorism etc. It makes detection and conviction of perpetrators of rape and child molestation more difficult due to diversion of resources. Each blasphemy case means that women and children of Pakistan are less safe.