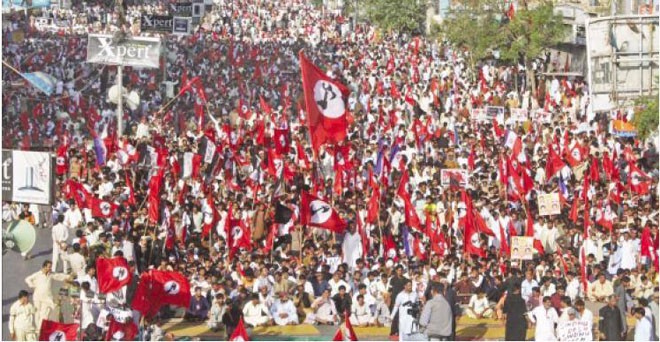 On their annual freedom march on March 23, perhaps the first time in the history of the country thousands of people belonging to Jeay Sindh Qaumi Mahaz (JSQM) gathered on Karachi’s M.A. Jinnah Road, carrying the burnt and bullet-riddled bodies of their leaders to record their protest and disperse peacefully.

"The situation in Sindh can worsen after the recent killings of JSQM central leader Maqsood Qureshi and his associate," says senior analyst Naseer Memon. "The forces who are responsible for the current situation of Balochistan are trying to turn Sindh’s peaceful political nationalist movement into a violent one."

Sindh’s nationalist movement has achieved many milestones in a peaceful manner like the movement against Kala Bagh Dam, the anti-One Unit movement, the movement against dual local government system in Sindh and many more. Observers are of the view that the anti-Sindh forces are trying to drive this peaceful movement towards violence in order to justify brutal action against them. PPP Chairperson Bilawal Bhutto has also condemned this incident and so have the PPP MPAs on the floor of Sindh Assembly.

In the early hours of March 21, Sindhi nationalist movement’s most popular leader late Bashir Qureshi’s brother Maqsood Qureshi and his party associate Salman Wadho’s bullet riddled bodies were found in burnt condition near a small town of Bhirya district Naushero Feroze. Both Maqsood and Salman went missing a night before. They are suspected to have been killed by the intelligence agencies of the state.

Earlier in 2012, Bashir Qureshi was also found dead in mysterious circumstances. His party’s leaders and relatives thought he was poisoned due to his political thoughts. After the unsolved death of Bashir Qureshi, his younger brother Maqsood was active in the politics of JSQM and remained active as party spokesperson till his tragic death.

Analysts and observers believe the sudden and tragic death of Maqsood Qureshi will change the political scenario of Sindh. This could compel a large number of Sindhi youth to become associated with groups who believe in violence and lead to an insurgency-like situation in Sindh.

In the last three years alone, over 20 bullet-riddled bodies including that of Muzaffar Bhutto, Sirai Qurban Khawar and others were found from different parts of Sindh. They were workers and leaders of different groups of Jeay Sindh.

JSQM, the party of murdered leader Maqsood Qureshi inspired by the thoughts of G.M. Syed, believes in separation and is struggling for Sindhudesh. But it believes in non-violent and peaceful struggle.

Chairperson JSQM and nephew of the deceased Maqsood Qureshi, Sanan Qureshi, tells TNS the state of Pakistan and its security agencies are responsible for the murders as they had already martyred his father (Bashir Khan Qureshi). Replying to a question, he says the agencies did not like the gathering of sons of soil ‘Sindhies’ to hold their freedom march in Karachi. "They pressurised us to postpone our freedom march but we refused to accept such pressure. Then they first kidnapped, tortured, martyred and then inhumanly brunt their dead bodies but we Sindhis are now ready to die for our freedom."

The Sindhi nationalist parties are divided into two obvious groups. There are separatists and anti-state like JSQM led by Sanan Qureshi, son of late Bashir Qureshi and Dr Niaz Kalani, JSMM (Jeay Sindh Mutihida Mahaz led by Shafi Burfat), and three to four groups of Jeay Sindh Mahaz led by Abdul Wahid Arisar and Riaz Chandio. Others who are not separatists are struggling for the rights of Sindh within the framework of Pakistan and believe in political process like Sindh Taraqqi Pasand Party (STP) led by Dr Qadir Magsi, Sindh United Party (SUP) led by Syed Jalal Mehmood Shah grandson of G.M. Syed and Qaumi Awami Party (QAP) led by Ayaz Latif Palijo.

Political circles believe that Shafi Burfat works under the code name Commander Darya Khan and his group uses the cover name Sindh Liberation Army (SLA) for their sabotage activities in the last seven years or so. Shafi Burfat openly preaches militancy and suggests that all peaceful struggle is just a waste of time. JSMM also has close relations with Balochistan’s separatist and insurgent groups.

Law enforcers believe that JSMM is collaborating with Baloch insurgents involved in blowing up railway tracks, electricity lines and gas supply bombings throughout Sindh. However JSMM and Shafi Burfat never owned the responsibility for these activities. Yet many FIRs have been filed against Shafi Burfat and his party workers and leaders. Sindh government’s Home Department, while declaring him the most wanted person of the province, announced a head money of one million on the arrest of Shafi Burfat.

Observers believe that after the death of late Bashir Qureshi in 2012, Shafi Burfat-led group has become stronger and can attract Sindhi youth to their thoughts.