Quite a nice man to know 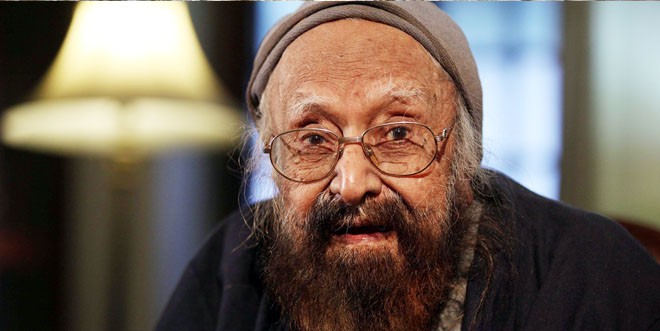 As recent as June 20, 2012 Khushwant Singh (1915-2014) wrote: "Though forced to flee from Lahore in August 1947, I do not have the slightest ill-will against Pakistan. On the contrary, I describe myself as a man of dual nationality."

As I heard the sad news I started looking for his books that I had collected over the years; among them Collected Stories which he himself gave me when I called on him nearly seven years ago and which bears the following inscription in his own hand "To Akmal Aleemi with affection, Khushwant Singh, 9 Dec, 2007." This is one of nearly 60 books he authored or edited.

I knew Khushwant through Washington friends, Khalid Hasan and Surjit Kaur; both passed away before him.  Before leaving for New Delhi, I had picked up a few books that I thought might interest the famous Indian writer.  Surjit had sent him some favourite toiletries.

A graduate of Government College, Lahore, Khushwant Singh settled in the Punjab metropolis and practiced law there until 1947. His short stories and other writings cover pre-partition Lahorites and developments of that eventful era. "Posthumous", the first story in his book, refers to Shafi, Qadir and Khosla. They were Mian Muhammad Shafi (Meem Sheen), who then worked for daily newspaper Tribune and later joined Civil & Military Gazette as a reporter, Manzur Qadir, a fellow barrister at Lahore High Court who became the foreign minister of President Muhammad Ayub Khan and  drew the plan for basic democracy and Justice G.D. Khosla, a member of the LHC bench, who opposed the two-nation theory and became chief Justice of the Punjab High Court on the eastern side of the line drawn by Sir Cyril Radcliffe.  After retirement from ICS, he headed one of the three national commissions constituted by the Central Government to investigate the death of Subhas Chandra Bose near Taiwan in an alleged air crash.

Tribune owned the two-storied building on Rattan Chand Road that was later occupied by the Progressive Papers Limited, publishers of The Pakistan Times and Imroze.  His other writings tell us about the importance of a Munshi (clerk) in the business of a lawyer.  He says his first Munshi in Lahore was a Shia Muslim who quit his job after learning that his boss was an agnostic.

After I had settled comfortably at the Rajinder Nagar apartment of Washington colleagues Umesh Agnihotry and his wife Pushpa, I called Sardar Khushwant Singh to announce my arrival in New Delhi. Local friends had briefed me on the constraints on his activity. For example: What time he would take a phone call and how long he will stay with a visitor.  Surjit had told me that Khushwant lived alone since 2002 when his wife, Kaval, died, but received on daily basis Naina, his only grandchild. The woman lived in another part of the Indian capital with her family but visited her grandpa every evening. He picked up the phone when I called and expressed my desire to meet him.  He said, "how about tomorrow?  Have a drink with me at 8." I said, "I will be honoured!"

KS commented on Jaswant Singh’s book on Jinnah in the Hindustan Times and differed with the author by calling the fragmentation of India "inevitable".

I was getting ready to go to Khushwant Singh’s home when Navin Malhotra, a Door Darshan district correspondent showed up.  We did not have enough time to sit down and talk.  Therefore he readily accompanied me at my request.  "Please do not ring the bell unless you are expected," read a warning outside the apartment.  He pushed the button because we were expected.

Sujan Singh Park, an O shaped red brick apartment complex which is attached to Ambassador Hotel in an upscale neighbourhood, is one of many properties in New Delhi, developed and built by KS’s father, who named it after his father. Being a prominent government contractor, he was a rich man who befriended many Englishmen and Indian political leaders. Although born in a small village Hadali, Khushab, Sargodha, that formed part of Pakistan, Khushwant lived and died in one of the apartments at the Park after leaving Lahore. He gained prominence as a diplomat, writer, historian, journalist and parliamentarian in India.

Barring an early stint with the Indian Foreign Service, he lived and worked mostly in New Delhi.  He was editor of Illustrated Weekly of India, editor-in chief of the National Herald and Hindustan Times, and initiated or supervised several other Indian publications. He was awarded Padma Bhushan in 1974 for his services to the country but returned it in 1984 protesting army’s occupation of Golden Temple under orders from Prime Minister Indira Gandhi.  He became a member of the upper house of Indian Parliament and was bestowed with even a higher civilian award, Padma Vibhushan, in 2007 by the government headed by a fellow Sikh, Manmohan Singh.

He supported the Indian National Congress and its leader until she ordered the attack on the major Sikh shrine in Amritsar and failed to extend protection to religious minorities.  He once remarked that, "we had many donkeys as prime ministers."

He also travelled to Rochester, Princeton, Honolulu, Paris, Oxford and other centres of learning to give lectures and earned grants from the US and Indian academic foundations.

I was stunned to look around the condition of the drawing room where one of the richest Indians welcomed me.  It was clogged by books; scrap paper and unwanted household items.  The furniture was as old as the man who owned it.  All the couches were draped in later day slipcovers. A frail Khushwant Singh sank deep in the worn-out sofa by the back wall wrapped in a blanket, uncombed locks of thinned hair required by his culture dangled from a half covered head and chin.  At this age and accomplishment, he was not obligated to rise for a visitor but he was kind to me.  I sat down next to him and Malhotra took a seat near the entry door reverently keeping quiet throughout the session. KS was nibbling on a kebab he said was sent by a Muslim eatery owner. As expected, he had the company of two women:  a senior journalist from Hyderabad Deccan and a budding international worker who had served the United Nations.  He asked about the welfare of Dr. Surjit Kaur, whose last book -- Sikhs Abroad was prefaced and edited by him and launched by Prime Minister Manmohan Singh, earlier.

A domestic brought drinks and snacks and we chatted about the international affairs with input from the two women in the room. An hour passed. A small group of cultural workers led by a well-dressed but over-weight woman entered the room and left after delivering an invitation to KS.  He was invited to many cultural events in the city but seldom went out to attend. Naina arrived and we left the man to spend quality time with his granddaughter.

Khushwant Singh wrote three novels including Train to Pakistan. It is set against a background of senseless killing and destruction that occurred in the wake of the partition of Punjab on both sides of the divide. It depicts the basic goodness in human nature found even in ill-reputed members of the society. Juggut Singh, who loved a Muslim female singer, foils the communal plot to slaughter uprooted Muslims before crossing the emerging international border and allows the train to roll over his body. The theme was also endeared by other fiction writers including Saadat Hasan Manto, Ahmed Nadeem Qasmi, Rajinder Singh Bedi and Krishan Chander who won unfettered praise from him. He also admired Intizar Husain among the Pakistani writers.  His book, Delhi: A Portrait, tells the story of rise and fall of Moghuls in India with special references to the bloodshed perpetuated by the monarchy in its traditional citadel.

An unorthodox and a blunt man who titled his autobiography as Not a Nice Man to Know and was dubbed "old dirty man" because of the emphasis on sex in his fiction, Khushwant Singh launched his novel In the Company of Women in 1999 in New Delhi. The guests at the ceremony included Pakistan’s High Commissioner, Ashraf Jehangir Qazi, accompanied by his young daughter who wanted to meet with the Indian intellectual.  He planted an innocent peck on Miss Qazi’s forehead upon greeting her. The news picture of the encounter enraged the mullahs who would not tolerate a kafir kissing a Muslim girl of his granddaughter’s age.

He wrote extensively about his co-religionist Sikhs, his magnum opus being The History of Sikhs, a two-volume chronicle, published by Princeton University Press. Ranjit Singh: Maharaja of the Punjab 1780-1839 is an interesting study of the only native king of the land of five rivers who lived and died in Lahore.  He, however, opined that religion is the greatest enemy of India.

KS continued writing his newspaper columns in his own hand even in this age of computers until recently.  He commented on Jaswant Singh’s book on Jinnah in the Hindustan Times and differed with the author by calling the fragmentation of India "inevitable".  "Indians were never an integrated society.  Besides caste and language divisions, the greatest was the Hindu-Muslim divide.  They got along reasonably well but kept their distance from each other.  There was never any real mixing of families visiting each other’s homes or even contemplating matrimonial relationships.  The British fostered the feeling of separateness between the two. As the time neared for British to leave, Muslims began to feel uneasy at the prospect of living in a Hindu-dominated India."

Unlike many Indian journalists, he treated Pakistan and India even-handedly. Commenting on the Mumbai attack, he wrote: "(Ajmal) Kasab named several Pakistanis and an Indian Abu Jundal as co-conspirators. There is more than one Indian involved in the elaborate and meticulously carried out carnage of innocents (numbering 164).  Now it is up to India and Pakistan to prove that when they say they will cooperate in stamping out terrorism they meant business and not empty talk to befool the world.  Let us see how rulers of the two countries play their roles."

Khushwant Singh, in his numerous essays, also dilated on philosophical thoughts.  He attacked the Hindu-Sikh custom of burning the dead.  He argued that India cannot afford to denude its forests for disposing off its dead bodies. He preferred burial at sea over cremation. Posthumous talks about the disappointing reaction of one’s own kith and kin over one’s death.  "I feel very sorry for myself and for all my friends…..but I also feel elated and want people to mourn me.  So I decided to die -- just for the fun of it as it were. In the evening, giving enough time for the press to hear of my death, I give up the ghost.  Having emerged from my corpse, I come down and sit on the cool marble steps at the entrance to wallow in posthumous glory."

Quite a nice man to know