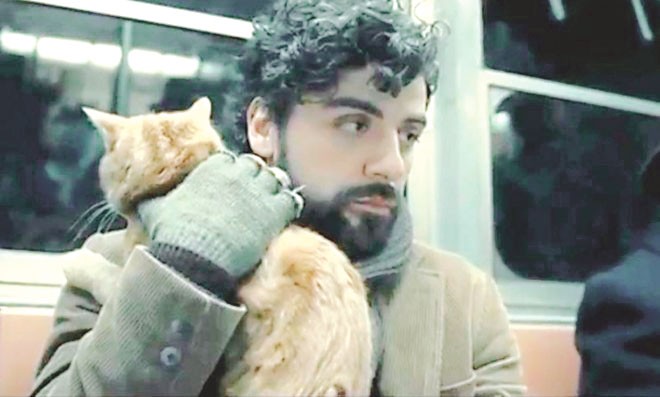 *ing Oscar Isaac, Carey Mulligan,
John Goodman, Garrett Hedlund, Justin Timberlake,
F. Murray Abraham, Stark Sands, and Adam Driver
Written and directed by Joel Coen and Ethan Coen
Inspired by the memoirs of singer Dave Van Ronk, the Coen brothers delve into the folk music scene of early ’60s Greenwich Village in their latest film Inside Llewyn Davis, the story of a struggling folk singer, marred by a series of misfortunes mostly of his own making.

We meet Llewyn Davis (Oscar Isaac) at The Gaslight Cafe in 1961, as he gives an earnest rendition of a traditional folk song to a small but captivated audience. Formerly part of a promising folk duo, he is down to performing on his own after losing his musical partner. But things aren’t going quite as well as he would have hoped. No one’s buying his album; he has no money and no place to live; and his bad luck and bad attitude affect everyone – human or feline – who crosses his path.

He shuffles from couch to couch, staying with friends and acquaintances, including the folk duo and couple Jim (Justin Timberlake) and Jean (Carey Mulligan), but then we find out that he has slept with Jean behind Jim’s back. He lodges at his older friends, the Gorfeins’ (Ethan Phillips and Robin Bartlett) place, then loses their cat. He is rude to his sister (Jeanine Serralles), dismissive of everyone who is just "existing", and when he gets the occasional chance at redemption, he doesn’t stops to take it. In short, he is, as Jean puts it, "like King Midas’ idiot brother".

So yes, the film’s central character isn’t a very nice person and the viewer isn’t given many reasons to root for him. But while we may not end up with a favourable opinion of Llewyn Davis, he is still an interesting protagonist. As he struggles through his messy life with no triumph in sight, his melancholic existence makes for a contemplative yarn, and the Coen brothers play well with this kind of darkness, augmenting it occasionally with their standard whimsy. But much like its protagonist, the film is perhaps a tad too self-absorbed; it doesn’t always have a sense of purpose or follow a concrete course, and its pieces don’t necessarily fit seamlessly.

Its cast is one of the movie’s strengths. Most of the supporting actors don’t have big roles, but they all play them well. Carey Mulligan is fierce as the scathed Jean. The ever dependable John Goodman is predictably awesome in the role of the junkie jazzman that Llewyn meets on a journey, despite the fact that his character eventually feels like a passing distraction on a random detour. But ultimately it is Oscar Isaac who is in charge of the whole film, so it’s fortunate that he very perfectly embodies the scruffy folk musician, both as an actor and a singer.

Despite the fact that he is deemed to be good but not great, Llewyn’s music makes for a compelling listen. The soundtrack sees the Coen brothers once again work with T-Bone Burnett (who previously collaborated with them on the Grammy award winning O Brother, Where Art Thou? soundtrack, and who went on to win an Oscar for his work on Crazy Heart), and comprises primarily of the cast’s rendition of traditional folk songs, mostly performed and recorded live. The selection is heavily influenced by Dave Van Ronk’s work and fits well with the setting.

Overall, Inside Llewyn Davis takes us back in time through the story of a character who might not deserve our sympathy (and is perhaps more subverted than necessary) but makes for a compelling case study. Visually, the film is skilfully crafted, and very evocative of the era it is set in, with the cinematography bringing the harsh New York winter to life. And it isn’t a surprise that the setting feels authentic, since most of the songs and venues are real, and many of the characters are inspired by real people; being familiar with the era and its music will add more context to the proceedings. Because of its loose structure, the movie might be trying for those who like a clear, direct, well defined, and fast paced approach, and the protagonist might leave some viewers weary. But those who enjoy the Coens’ brand of storytelling and are interested in folk music are likely to find this character’s odyssey intriguing.