"We really need to get music festivals happening regularly." 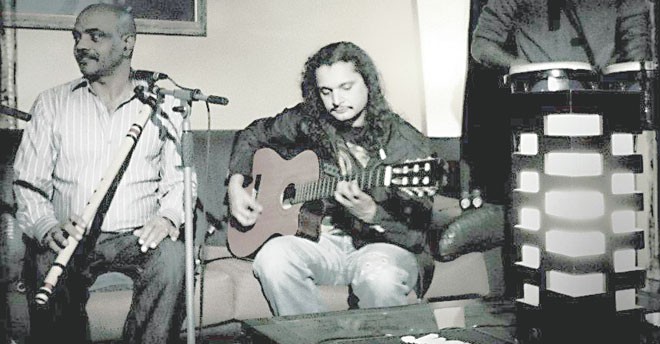 Hitting it out of the park

If there are three things that people in Pakistan can get behind, no matter what the state of affairs, it is cricket, Bollywood and music.

In cricket, there is no bigger game than a Pakistan-India match. Nationalistic fervor takes on a whole new meaning as misogynistic, racist commentary (in the name of humour) is hurled at each other or simply used to celebrate a ‘victory’.

Of course, during Asia Cup, no team was spared. We had a go at everyone, and to some degree, it was predictable. It can be ‘fun’, if you’re into that sort of thing, or you can just walk away from it all.

Social media’s a great way to test this theory.

There are genuine fans of the game everywhere, but, good things often go unnoticed, because so many of us are hardwired towards the negativity that stems from fearing, hating, judging and ignoring each other.

With Bollywood, it is slightly different. The love affair with Hindi cinema is odd, intense, and yet, explicable. A nonexistent film industry (with a hysterical revival forever-in-the-making), an entertainment-starved public, and our complicated, shared history made it inevitable.

The recent spate of ‘locally-produced’ films like Zinda Bhaag, Seedlings (Lamha), Josh, the upcoming Anima State, Moor alongside ‘blockbusters’ like Chambali and Waar are promising signs but jumping the gun and getting on the ‘revival’ bus is a mistake made too often.

Bollywood’s filled that ‘void’ with their unique brand of celebrity-driven cinema. It is escapism (now with more item songs and violence than ever before) in Shining India but with a ‘moral’ center. That’s another issue, but, for most, it is just escapism and good fun, or is supposed to be.

A sizable population (around the world including Pakistan) is discussing, as we speak, the abs of Ranveer Singh versus Arjun Kapoor, the sadness that is this world after Salman Khan’s Jai Ho didn’t do as well monetarily as expected. Personally, one is wondering about Shah Rukh Khan’s torn ligaments after a door fell on him.

Many of us are cheering on actor Ali Zafar (aka the musician formerly known as Ali Zafar) for doing another film that doesn’t look like a C-grade fiasco.

A competitive streak always finds it way into a narrative that involves India. They’ve got the batsmen, we’ve got the bowlers, they have the appeal of Bollywood and we have Shaan (the man, not the masala, although that’s pretty great, too).

They have undeniably fantastic music, and guess what, so do we. It is the one thing that connects people, on both sides of the border, to each other. Indian artists have fans in Pakistan and Pakistani artists have fans in India. Naysayers always find a way to criticize. Nonetheless, an audience exists and it goes for both countries.

When the going gets tough…

In the last decade, there was a fresh wave of musicians, most of whom, arrived just in time to begin a new chapter in the history of modern music.

Junoon made way for the reinvention of the artist we now know as Ali Azmat. Noori, Strings, Fuzon, Ali Zafar, Atif Aslam, Jal, Aaroh, EP are just some of those acts.

Consider it the last hurrah, because, now we’re just regurgitating the same people or ignoring pretty much, everybody else.

One act that stood out from that now-so-distant era was the Mekaal Hasan Band.

Spectacular albums (such as Saptak and Sampooran) matched by incredibly beautiful live performances should’ve made MHB one of the biggest bands in Pakistan. However, a decade later, MHB is struggling to stay alive in the spotlight (for all the right reasons) because ticketed shows are disappearing, and the music community is on its own.

However, the good news is that bands like Mekaal Hasan Band and Rushk (they’re back) and so many others refuse to give up.

India is a massive market for musicians from Pakistan and they travel to the other side for shows, collaborations, acting gigs, etc. Indian musicians/singers are just as popular. Think Kailash Kher, Mika Singh, Sukhbir, etc.

Mekaal has gone one step further though. Instead of simply performing in India, Mekaal Hasan has joined hands with a bunch of musicians from across the border and has formed an Indo-Pak band.

From Pakistan, the band will feature Mohammad Ahsan Papu and Mekaal Hasan and from India, drummer Gino Banks, bassist Sheldon D’Silva and vocalist Sharmistha Chatterjee. Together the five of them will get together for the upcoming album called Andholan and perform together as well.

In a conversation with Instep, MHB’s Mekaal Hasan talks about the reinvention of the band that has been a passion for him for years.

Instep: We’ve seen bands perform in India. Playback singing is another way to go. But, recording a full-fledged album in India with Indian musicians – that’s uncommon to the modern music scene in Pakistan.

Mekaal Hasan: It was a combination of timing and luck. I was already familiar with the top musicians in India’s vibrant jazz and fusion scene and Gino Banks and I had talked about doing some music together as far back as 2010-2011.

At that point it was always a scenario that MHB would tour India and whenever we’d play Mumbai, I’d run into Gino and Sheldon, so we always kept in touch. I realised as far back as 2010 that the only way to really play in India for my kind of material, would be to do it with an Indian line up of their top musicians. That’s pretty much what happened and I was introduced to Sharmistha Chatterjee by Gino, since she had been working with Gino’s father, Louiz Banks, in his band as well as Ranjit Barot.

Instep: Talk to us about the material that will make up the album.

Mekaal Hasan: For this particular record, the material had already been written. However, once the record is out, we will be writing material based around the musicians in the current line up.

Instep: Female singers in bands are not common to the music scene. Milestones don’t play. Meesha and Overload split. Rushk is the only band that’s gone ahead with this exciting idea in recent times. What’s your take on it? In the global scene, this idea is gaining momentum.

Mekaal Hasan: I don’t know about trends or why women shouldn’t be fronting bands, in Pakistan or otherwise. The role of females tends to be solo artists in music, so I think that it’s very healthy for women to be fronting bands, which have a rock or aggressive sound to them. Ultimately, the quality of the musicianship is what matters to me and having a female voice really refreshes the music in terms of range and clarity. Sharmistha is a really amazing musician and also an unbelievable singer, so she thinks like a musician and not just a singer, which is a big difference to my experience of working with singers.

Most singers will sing whatever is written for them, but she will actually come up with her own lines and ideas and that really makes for a much more fun collaboration because she is able to go beyond what is there and bring her own personality into it.

Instep: In a conversation last year, you had said that people to people contact is important. Politics aside, what kind of response has MHB generated in India so far?

Mekaal Hasan: It’s always good. The band’s music has a lot of fans of all age groups, and the people who come out to hear us know what kind of music we play, so they are not there expecting us to play Bollywood or anything like that. We have a repertoire and with the music from the third record now being played live, there’s a variety of music to play.

Instep: How did Sharmistha, Gino and Sheldon fall on your radar? All accomplished musicians, of course, but why these particular musicians?

Mekaal Hasan: It’s not about just great playing with these people. As musicians, they are probably the best of their generation in the range of music they play. A cursory look at the musical company they keep shows that it is not possible to play with those kinds of people and not be someone really special yourself. From John McLaughlin to Guthrie Gowan to Trilok Gurtu to Zakir Hussain – the standard of musicianship they bring is far beyond what a ‘normal’ drummer and bass player would be able to deliver. Most importantly, they are genuinely sweet people who are all very busy musicians. The allure of commerce is not the most important thing to these artists. They play because they love the music and they like the writing style that MHB has. Were it just another band, I don’t think they’d make the time for it, but as it happens, there’s enough unique things about each person and their musical style in this line up now, to make the music sound more exciting and dynamic.

Instep: Are you feeling isolated in Pakistan as a musician with corporate shows replacing ticketed events. What, in your opinion, needs to be done in order to revive live music?

Mekaal Hasan: We really need to get music festivals happening regularly. Festivals are amazing things because they allow audiences and artists to intermingle and interact in ways very different from the usual corporate show environment.

It is also necessary for artists to constantly strive to play better and nothing can do that for you unless you play in front of people and your peers. The interaction is healthy and it lets musicians and audience members feel that there is really a community there, that we are all not just struggling alone, but that there are others who are going through the same trials and together we can make some very positive music.

Instep: Do you believe music has the power to replace the narrative of hate?

Mekaal Hasan: Yes, because music is about reaching out and expressing ideas or concepts. It moves people on many levels. It is also a medium where it is never a competition, but rather a bringing together of people’s talents and skills, which we all of course, hear as a song, or a melodic hook or a groove.

"We really need to get music festivals happening regularly."