The Council in question 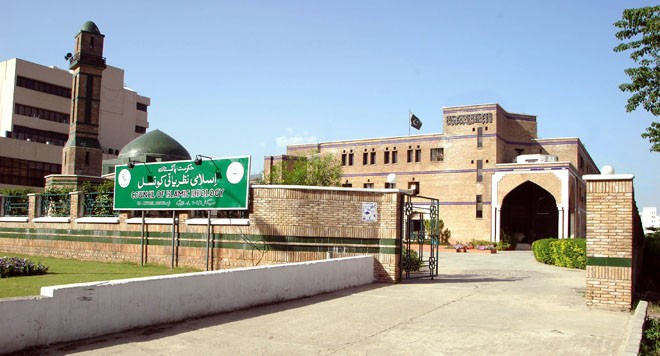 Pakistan’s Council of Islamic Ideology (CII) is in the limelight once again because of its agenda, focusing on a possible revision of Muslim Family Laws.

The CII, headed by a member of Jamiat Ulema-e-Islam Fazlur Rehman (JUI-F) Maulana Muhammad Khan Sherani, declared a few days ago that a wife’s permission was not necessary for a man to remarry. The matter of whether an underage child can be married with the consent of the father or guardian is also under discussion.

Currently, there is no woman member on the council ever since the last serving member, Dr Farida Ahmed Siddiqui, died in August 2013.

Most of the appointments in CII are on political rather than considering the academic and scholarly grounds. More than half of the current members are appointed on political grounds. "As many as 10 members have not spoken even a single word during the proceedings in the past one year," claims a CII official, asking not to be named.

Rigid mindsets in the council claim monopoly over the understanding of religious texts and try to occupy political and social space in the name of religion.

Since 1962, there have been 13 chairpersons of the council; out of these more than half were political appointees. The sitting chairperson of the CII, Maulana Muhammad Khan Sherani, interestingly, is an elected member of National Assembly from Killa-Sherani Saifullah, a far-flung area of Balochistan.

"We believe that parliament is the supreme authority to legislate or debate the issues. If there is need to create fresh arguments, the clerics and religious groups should contest elections and join the House and such official organisation be dissolved," says I. A. Rehman.

Over 70 years old, Sherani has not attended any public school in his life. His qualification is having a certificate of "Darse Nizami" (Religious Education) from two religious seminaries -- one in Quetta and the other in Bannu. However, he is five-times elected MNA and one-time elected senator on his party’s platform and has served as federal minister for religious affairs. He has been a member of CII twice before.

His first appointment was supported by the then President Asif Zardari to run the coalition setup. For the second term, JUI-F supported PML-N in the assembly.

Sherani has asked the government that status of CII representatives should be considered equal to the parliamentarians "because both are related to legislation". He has even approached Prime Minister Nawaz Sharif to make the post of chairperson equivalent to that of speaker of the National Assembly or Chairman Senate in terms of perks and privileges.

In the past 12 years, the CII has made dozens of recommendations to the parliament; yet not even a single one has been taken up for discussion. "The council was meant to review all laws made upto August 14, 1973 in conformity with the injunctions of Islam and to continuously observe that no law is made that is repugnant to the injunctions of Islam," a former judge and former member of the CII says on condition of anonymity.

"However, gradually, the office of the chairman started getting importance as appointments were made on political grounds," he adds. He thinks the council’s primary responsibility is to apply general principles of Islam as permanent values and come up with human objectives. "Has this council talked about any important Pakistani issue, such as Taliban or terrorism, economic or security problems, yet?" he asks. "They are promoting Taliban’s mindset."

Tahir Mehmood Ashrafi, a Deoband cleric and also a member of the CII, says these family laws have already been reviewed by the previous council. He stresses the need to take up contemporary issues by the CII, including terrorism and Pakistan Protection Ordinance, etc. But, according to Ashrafi, the chairperson never talks about these despite insistence from some members. "The code of conduct proposed for legislation for interfaith harmony is before the council for the past few months but it has not become the agenda till date." He agrees with the view that the council needs to be revamped, comprising of scholars who bring about reforms.

An insider of the CII informs, "In a couple of meetings of the CII, reviewing blasphemy law to stop its misuse, members nominated by the Pakistan Peoples Party did not leave a single comment during the whole discussion. Ashrafi remained the only voice but, later, the chairperson turned down his proposals to stop the misuse of such laws," he says.

"Moderate voices are dying down," laments Ashrafi, adding, "It is becoming difficult in Pakistan to raise any issue which is discussed in the name of religion. The political will is too weak to touch the issue of extremism."

In a recent statement, the council’s chairperson said, "those who claim responsibility for terror acts have nothing to do with the Taliban. They are terrorists who want to destabilise the country. Such groups work for foreign intelligence agencies and their aim is to weaken the foundations of the country."

"Since 2011, the council has been focusing on family laws. The Ulema are more interested in implementing Fiqh. There is not much difference between them and Taliban; both consider Fiqh as Sharia and both are for its enforcement," observes a former member of the CII.

Syed Munawar Hasan, chief of Jamaat-e-Islami Pakistan, thinks that CII is a constitutional organisation and no one has said that it has acted beyond constitutional limits. "Their job is to recommend and it is up to the Assembly to accept or not," he says, adding, "Whether their recommendation is right or wrong is to be discussed on the Assembly floor." Hasan says it is up to the government if it wants to reconstitute it or change its composition or decrease its role. But if the CII is working constitutionally then there should be no issue. Their discussions and decisions’ psychological impact is welcomed but only those should debate who know it.

I.A. Rehman, Secretary General Human Rights Commission of Pakistan (HRCP), says "Poet of the East, Allama Iqbal, criticised the idea of formation of an advisory board of religious scholars to guide the Iranian parliament in 1905. "We also believe that parliament is the supreme authority to legislate or debate the issues. If there is need to create fresh arguments, the cleric and religious groups should contest elections and join the house and such official organisation be dissolved."

He says when clerics fail in having their agenda approved they take their frustration out on marginalised sections like women, children and minorities.

"In previous governments, chairperson of the CII used to be a retired judge or a scholar or a reformist like S.M. Zaman, and Dr Khalid Masud," Rehman says, adding, "Now we have orthodox and conservative religio-political clerics like Maulana Sherani." He says the council has been politicised and it depends on the government what kind of people they want in it.

Rehman says such nominations would continue to take up this type of agendas and add to the confusion. "This is because the government is weak and they are taking advantage of this situation. They are preparing ground for their likeminded groups," he says, recalling, "When Muslim family laws were presented in the Assembly, JUI’s leader Mufti Mehmood was a member of the Assembly and he did not oppose the law."

The Council in question