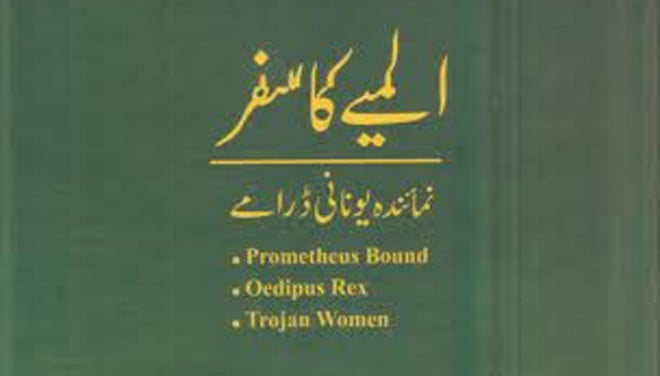 Ashfaq Saleem Mirza’s new book Almiyah Ka Safar (progress of the tragedy), is an opportunity for readers of Urdu literature to acquaint themselves with Greek classics. The book is a collection of Urdu translations of three great Greek tragedies: Prometheus Bound, Oedipus Rex, and Trojan Women, written by the greatest tragedians of Greece, Aeschylus, Sophocles and Euripides respectively in the fifth century B.C. The period is known for its unprecedented progress in the fields of literature, philosophy, politics, and science; a century that also glitters with stars like Socrates and Plato.

Greeks are considered the founders of tragedy in drama. Prior to that era, drama was centred mainly on the stories of gods and god-like warriors. Stories relating to the world out of the reach of common people and a fascination for mortal humans were, and still are, a big source of entertainment.

Those were times when the Greek society was thriving on principles of democracy and the common man was becoming a central topic of intellectual debates. Politics was no longer a luxury. The thought process was geared to ensure smooth transfer of power to the common man and encourage them to take part in the processes and debates regarding decisions affecting their lives.

In the field of literature, the tragedians introduced the human element -- a mortal factor, unknown to the world of gods. The presence of the mortal human beings added to stories a hue of tragedy, sadness and gloom. Tragedy emerged out of mortality.

The element of mortality in literature allows certain questions to rise. Virtue and evil, norms of the society, character, freedom, and responsibility were the issues, though alien to the world of drama, which had vigorously been brought in discussions in the intellectual arenas for some time. Life ends at some point and nothing is permanent. Death is a symbol of a sad end where all the struggles end. It is a tragedy, a taste that the gods were devoid of. Death produces tragedy.

These dramas marked the dawn of the genre of tragedy. It was the first time in the history of literature when dramatists consciously strived to bring the game of fate to ground, to the level of mortal beings. These tragedies were in fact the harbinger of the next phase of literature.

Trained in the subject of philosophy, Ashfaq Saleem Mirza has a wide array of interests. Philosophy, history, literature, sociology and politics are the major areas of his expertise. He is is also accredited with half of a dozen books, like Falsafah Kia Hai: Aik Maadi Taabeer, Falsafah-e-Taareekh: Nau Abadiyaat Aur Jumhuriat and Suggestions for Discourse on Philosophy, History and Society. A human rights activist and a supporter of progressive movement in Pakistan, Mirza is also an office bearer of the Progressive Writers’ Organisation.

These days he is engaged in a series of lectures on philosophy at the School of Modern History and Philosophy. He founded the school some years back to raise awareness about philosophy among people of fine tastes. His scholarly initiatives has been stirring waves for the last two years in Islamabad.

In an attempt to capture the real beauty of the original Greek text, the translator uses simple language yet keeps it poetic.

Mirza translates the emotional twists in dialogues with skill. His careful use of words enhances the readability of the translated text.

This publication is indeed significant, in the sense that it provides Urdu readers with an opportunity to get acquainted with the classics in the world of drama.