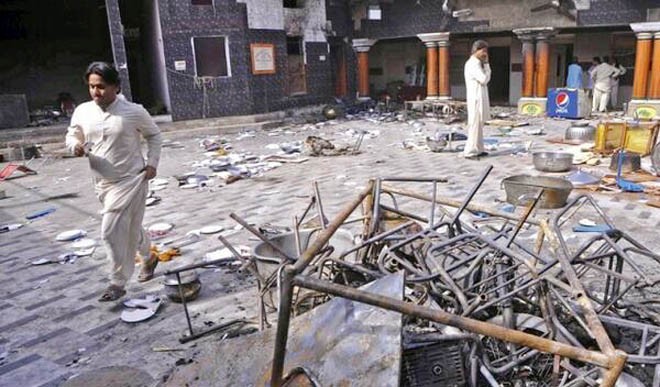 On March 16, a group set a dharmshala on fire and damaged some statues of Hindu deities in an adjacent temple in Jinnah Bagh area of Larkana. The attack was reportedly in reaction to alleged desecration of the Holy Quran by Sanjeet Kumar alias Baloo.

This incident has shocked the Sindhi community that was already feeling tense after a series of hand grenade and cracker attacks in cities across Sindh.

Although the majority of people in Sindh are Muslims, Sufism has been in the soul of Sindh for centuries. It is a unique type of Sufism that is not practiced elsewhere in the country except in Sindh. Though minor differences between Shia-Sunni, Barelvi-Deobandi, Muslim-Hindus-Christians etc. exist, they have not harmed the social fabric of interior Sindh. They have co-existed for centuries. It is a fact of life.

But the events of the past few months, particularly the attack on the dharamshala last week, suggests that Sufism is about to become a tale of the past -- as a wave of intolerance and extremism seems to be engulfing Upper Sindh.

Some eyewitnesses said that Sanjeet Kumar purchased a home in New Karma Bagh from Ashiq Hussain. Kumar, before moving his family into the new house, thoroughly cleaned the place and collected trash and set it on fire. Reportedly, in this heap of trash was a poster of Quranic verses, which a shopkeeper, Raja Shaikh, spotted and informed others.

Thereafter, angers flared and violence spread thoughout Larkana. Some people gathered on site and attacked the dharamshala and temple.

Shaikh was in a row with Kumar over some monetary matters.

Police and Rangers calmed the situation. Sanjeet Kumar was arrested and booked in the case.

A majority of people extended support to Hindus, including workers of religious parties, particularly in this case. "If a person commits a crime, he should be punished."

Human rights activist Ali Palh says on one hand the incident shows that intolerance is increasing in our society and on the other it highlights support for the Hindus extended by a majority of people, including workers of religious parties, nationalists and political workers, particularly in this case -- "If a person commits a crime, he should be punished, not the entire community."

District Commissioner Larkana, Gahwar Khan Legari, thinks the law enforcing agencies and district management has brought the situation in control. "The incident was a result of misunderstanding. We are investigating the matter and the Supreme Court has also appointed a district and sessions judge as an inquiry officer. We are trying our best such incidents never occur again. Sindh is the land of Sufis and tolerant people," he says.

Incidents such as attack on dharamshala, forced conversions and forced marriages reflect that Sindh too is falling to extremism.

Supreme Court while hearing the Larkana attack case ordered that a report on the incident be submitted to the court in 15 days. The case was heard at the Karachi Registry of the Supreme Court.

Hindus constitute about 10 per cent of Larkana’s total population of 400,000, with many running their own businesses.

Prime Minister Nawaz Sharif has also taken notice of the attack. Expressing grief over the incident, the premier said that protection of worship places of minorities is the government’s responsibility.

Khadim Soomro, President Sindh Sufi Sangat, says gone are the days when people from different faiths got together to celebrate eid milad-un-nabi, ashura, holi, dewali and other religious festivals. "In my native city, Sehwan, Hindus still celebrates eid with their Muslim friends. I have also seen Hindus setting up sabeels on ashura," he adds.

The small town of Udero Lal, in District Matiari, some 20 kilometres away from Hyderabad, is still a symbol of Muslim-Hindu brotherhood. Here, mosque and temple are in the same courtyard. Both Muslims and Hindus enter the courtyard through the same entrance. Both the communities live peacefully.

Senior political analyst Haq Nawaz Talpur says that interior Sindh has more or less remained clear of Hindu-Muslim conflict or any other form of inter-sectarian divergence. Apart from minor tribal feuds, interior Sindh has remained safe from suicidal attacks and bomb blasts by Taliban, al-Qaeda, Lashkar-e-Jhangvi and other extremist elements. "But, today’s Sindh is changing. It is not the same anymore," Talpur adds.