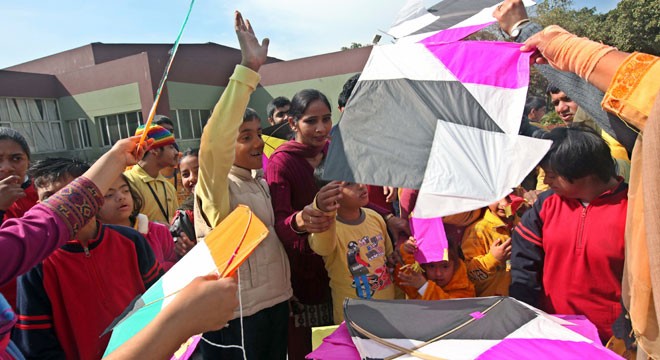 Women’s equality has made positive gains but the world is still unequal. International Women’s Day celebrates the social, political and economic achievements of women while focusing world attention on areas requiring further action.

Inspiring Change is the 2014 theme for our internationalwomen’sday.com global hub and encourages advocacy for women’s advancement everywhere in every way. It calls for challenging the status quo to win equality for women and inspire positive change.

Women in the kite-making sector usually have zero growth in their productive activities primarily because of their lack of access to skills enhancement and competitive growth opportunities. They usually do monotonous work without diversifying their skills in line with changing market traditions.

The women groups from Jhang are being registered as members of HomeNet Pakistan so they are members of a national level network which provides services required by the women enterprises. Several local members have initiated training opportunities for women groups.

Here the trade unions are important stakeholders in giving voice and visibility to the women enterprise around a rights based approach. Apart from the income generation demand, a serious concern that came from the home-based workers was lack of knowledge about rights, labour entitlements, legal protection and information. Linking them with trade unions has capacitated women home workers in terms of recognition of their rights and protection by state.

Kites are still being produced, but in smaller numbers and a bit secretively. The markets, these manufacturers say, are cities other than Lahore and abroad. One such destination is the United Arab Emirates.

In case of alternative businesses by the women folks, HomeNet Pakistan assisted them in selecting the partners and linking with retailers and suppliers. In a few cases, it was the local or community-based member organisation of the network of HomeNet which provided the facilitation. The most important factor in getting the facilitation is the "network and networking" among membership based organisations.

In terms of getting benefits as an enterprise, the skills for collective bargaining had provided support to the women enterprises at local level. They are negotiating on the wage being provided for work orders and ensuring contract terms, and in some cases written contracts are also being observed.

Capacity development activities for the workers in kite making have been conducted around human rights, women’s rights etc. The objective was to sensitise them on women’s perspectives and issues involved in the whole value chain.

Kites are still being produced, but in smaller numbers and a bit secretively. The markets, these manufacturers say, are cities other than Lahore and abroad. One such destination is the United Arab Emirates (UAE) where a man of Pakistani origin, Haji Amin, has been organising festivals for many years.

While the kite-flying ban is very much there in Lahore, the former kite dealers of the city say it is more lax in places like Muridke, Gujranwala, Faisalabad, Karachi etc.

Khawaja Basharat, a trader at Mochi Gate, says his family had been into kite business for ages but since 2005 they have switched their field of trade. A visit to Karachi reveals that kite sellers do their business openly and it is from there these goods are exported to other countries like United Arab Emirates (UAE). Kites made in Lahore and around also reach this port city.

Another regular customer of kites from Lahore is a community center in Sunnyvale, California, US with the name Pakistani American Cultural Center (PACC). The members of the center are mainly the Pakistani IT professionals working in Silicon Valley and their families. Thousands of miles away from their homeland, they have access to the manja-coated thread and paper kites which have become a rare sight in Lahore. The Pakistani community in Silicon Valley has already started its planning for this year’s Basant mela.

Keeping in view the huge demand in countries like UAE, USA, and the UK, talks have already been generated on exporting kites abroad and directly linking the HBWs with international markets and with subsidies for women. Talks with the Export Promotion Bureau and Lahore Chamber of Commerce and Industry are underway.

Government should acknowledge kite manufacturing as a major contributing industry.

Kite flying should be adopted and declared a sport.

Secure livelihood for home-based women kite makers, and acknowledge the industry’s a potential for export.

Kite-making women need to be organised and form their groups/organisations/trade union, etc. to be empowered for realisation of their rights.

Training in new skills is a good instrument for generating livelihoods and empowering women economically again.

During the project period, strong advocacy with media and parliamentarians had been carried out. The consultation with the parliamentarians and sharing of the findings of the baseline survey on women kite makers had very positive impacts on initiating talks on lifting ban on flying, thus paving way for getting work for HBWs in the kite-making industry.