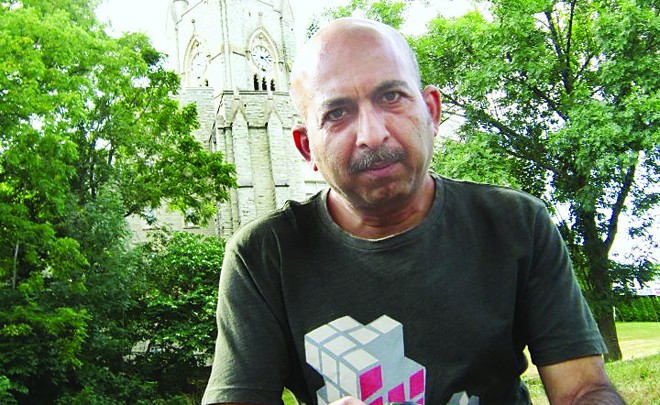 Masud Alam -- a fine journalist, a columnist, a doting father, a loving husband, a caring friend, and an intellectual -- is no more. He died in a car crash in Islamabad on March 12. The last I talked to him was when he called me last Saturday, March 9, and offered to take us out for brunch the next day. But I was not well and promised to go with him the next Sunday, without realising that that was the last time he wanted to go out with us.

Masud was exceptionally gregarious; he would make friends with very unlikely of people, crack jokes on unlikely of topics, and would charm his friends even if they were in sad moods; he would never be melancholic or depressed. He carried with him an aura of optimism.

Hailing from Sargodha, he joined the Pakistan Air Force in his youth but he was a free soul that could hardly be regimented; so his stint with the forces was a short-lived one. He moved on to do a lot of reading and writing -- creating a niche for himself with the BBC. He belonged to that disappearing breed of intellectuals who were equally at ease with different languages, most importantly Urdu, English, Punjabi, and Saraiki. This breed is getting extinct and he often lamented at the new crop of journalists whom Masud called barely literate in any one language.

His proficiency, especially in Urdu and English, enabled him to produce good prose in news reports, articles, satirical pieces, travelogues, and opinion pieces. A collection of his travel pieces Chalo was cherished by many. During the past couple of years he devoted most of his time training journalists, translating literary pieces from English to Urdu and vice versa. His weekly column appeared regularly in The News on Sunday. Cinema was his passion and he would always recommend good movies to friends. One never found his choices below par.

He had great plans for his coming years, he would often lament that he could not devote more of his time to his literary pursuits due to his financial obligations. Now, when his children had started their university education in Canada, he was planning to set up a farm near Islamabad where he could set up a small school, cultivate vegetables and spend time reading and writing; just the day he died in the car crash, he had spent hours with his wife looking for a good piece of land for his school and farm to be.

Masud loved children, his own, his friends’ and anybody else’s. He would stop his car at traffic signals to talk to child beggars, give them something, and reiterate his resolve to set up a free school for such children. If somebody pointed out to him that most of these children were professional beggars, he would have none of it and tried to prove his point by saying that if religious seminaries could cater to such children, why a more liberal and secular outfit could not attract children for worldly studies rather than producing fundamentalists and morons.

Masud was a secularist to the core; he felt for his country and its poor state of education, he craved for a syllabus for young children where they could be taught thinking skills and not rote learning, where Masud would play the role of a facilitator for children and encourage them to question everything under the sun.

The only thing that despaired him was young people’s desperation to leave this country and desire to settle in foreign lands. Though he had spent years in Canada, UAE, and the UK, he never decided to settle in any other country. He was concerned about his people and wanted to do something about them, but fate had planned something else for him. Rest in peace Masud, you will be greatly missed for your enthusiasm and courage; tears in my eyes, I still can’t believe you have left us.

(Masud Alam, the author of Yeh Woh for TNS for more than three years, passed away on March 12 in a car crash. Dr Naazir Mahmood was a close friend. He can be reached at [email protected])