My favourite souvenir: Of fertility and shrines 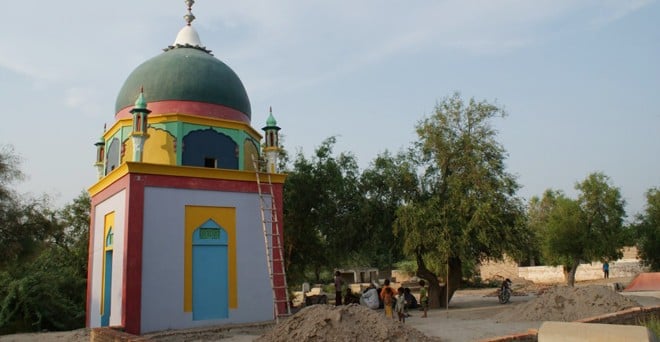 I know that after travelling around 300 kilometres from Lahore to this remote village in district Kamalia, near Chichawatni, it would be quite disappointing to not see the object of our curiosity.

But I also know once Abbas leaves I might get the chance of catching the sight of the souvenir at the shrine of Aban Shah.

This is the shrine of phallic offerings, made by mostly female devotees who want Aban Shah, the saint buried here, to intercede for them. According to their belief system, they are required to present a phallic offering, made out of wood, mud, marble, etc. depending on the economic strength of the devotee to the guardian of the shrine. The guardian then gives it to one of the malang women who takes the female devotee to a room and then pass the offering over her stomach.

"I have seen miracles taking place," Abbas, the guardian of the shrine, tells me when I go to his house after visiting the shrine. "I have also seen 60 year old women get pregnant because of the blessings of the saint."

Abbas is from the progeny of the saint, the fifth in line. He is a young man, almost my age, and talks candidly. Despite our cordial conversation, he refuses to allow me to see any of the phallic offerings that are presented to the shrine.

There was once a time when these offerings were found all over this place. Women would tie them on the branches of the ancient Waan trees or just leave them in the vicinity of the shrine.

I am told by my friend Altaf, who brought us here, that curious visitors once used to take back these souvenirs.

"I have also seen 60 year old women get pregnant because of the blessings of the saint," says Abbas, the guardian of the shrine.

Things have changed since a new Saudi-funded madrassa opened in Kamalia. Young students of the madrassa took it upon themselves to purge this shrine of its ‘un-Islamic’ practices. A group of students once descended upon the shrine when Abbas was not there and took away all the phallic offerings. When Abbas returned, he and his followers decided to fight back. Matters went to the local police officer who instructed Abbas to remove all the phallic offerings from visible locations to avoid hurting the religious sensibilities of these passionate madrassa students.

I am able to see one phallic offering when Abbas returns to his home to attend his visitors, leaving us alone with some of his dervishes. One of them is an old man, who in his naivety and perhaps unaware of the new policy, takes us inside the shrine where there is a small locker on the floor. He opens it and takes out a wooden phallic. It is circumcised from the top and painted in blue. I hold it while my friend photographs.

And that is the only souvenir I am getting!

My favourite souvenir: Of fertility and shrines