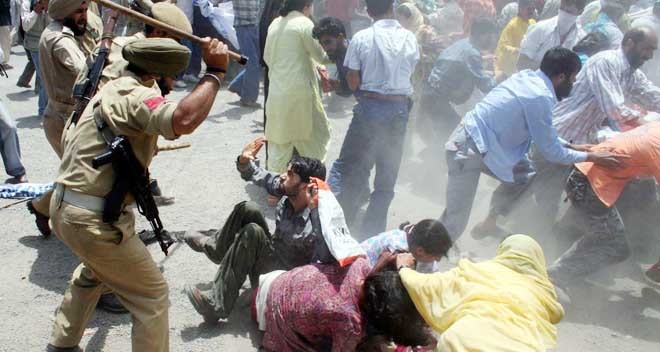 Are the ideals of secularism and humanism being upheld by mainstream and separatist politicians in our pluralistic state? How constructive a role is the civil society playing? The growth of nationalism or an autonomous Kashmiri identity certainly doesn’t involve supporting obscurantism or deliberately preventing the growth of knowledge and information.

The identity of a state or a nation cannot be built on unquenchable hate and certainly not on cashing in on the pain and grief of other people. It is or, at least, should be inconceivable, in the day and age of a global economy, to spurn the concepts of reason, rationality, and political and moral ethics.

The perpetuation of a politics that emphasises, reinforces, or creates cultural myopia and monocultural identities, in a society as diverse as ours, would be the bane of our existence. This damaging short-sightedness results in intolerance, arbitrary justice, tyranny, and ignorance.

The contemporary political discourse in the state, particularly the Kashmir Valley, doesn’t have to be limited to the framework of the two-nation theory. Nor should dissatisfaction with the policies of the governments of India and Pakistan vis-à-vis Kashmir encourage the glorification of reactionary politics. The last thing that Jammu and Kashmir needs is Taliban ideologues in any guise, either civil or political, or military. Such an extremist ideology or even a mild form of it confuses local, national, and international observers, and ends up encouraging reductive interpretations of the politics of Kashmir.

It is interesting to me that a lot of Kashmir observers in the Indian subcontinent as well as in the West reduce the Kashmir conundrum to the dispute between India and Pakistan over sharing the waters of the Indus basin, which originates in the state of Jammu and Kashmir. Disappointingly, in the discussion that followed my presentation at Salisbury University, Maryland, in May 2012, some very well-read academics and career diplomats reduced the entire issue to the water dispute between India and Pakistan. My editor and colleague at Oxford Islamic Studies lamented that most Americans couldn’t find J&K on the map. There are some other observers who circuitously see the issue in terms of the religious versus secular binary.

The public disappointments that Kashmiris have had to face over the years shouldn’t dilute democratic aspirations, and extremist ideology, perpetuated either by civil society, or politicians, or the military must, at all costs, be kept at bay.

Interestingly, there is a new breed of writers and columnists in the subcontinent, particularly in Kashmir, who, erroneously, labour under the delusion that pre-and post-1947 Jammu and Kashmir was a haven for pan-Islamism, which is completely anachronistic.

Such interpretations, willy-nilly, obliterate the legitimacy of regional political aspirations across party, religious, cultural, and linguistic lines. Much to my amusement, in response to an article of mine on the autonomous status of J&K, a British-Indian academic labeled me an "Islamist", probably because he thought about autonomy only in religious terms, not political ones. But that didn’t deter me from emphasising my worldview. I cannot emphasise enough how foolish it would be to smirk at the religious, provincial, and sectarian violence or growing obscurantism in either India or Pakistan, because that simply doesn’t bode well for a peaceful resolution and developmental politics in our neck of the woods. Sanctioned extremist political and religious ideologies in either of the two countries wouldn’t enable J&K to move forward.

Sloganeering, rabble-rousing, demanding the incorporation of articles in constitutions, and other theoretical issues are all very well, but the real test is whether these theories have a real impact in institutions, instead of being just hollow words. So, belittling the importance of institution-building and stoking a state of disorder would be highly irresponsible. After reading a recent essay of mine on the issue, my editor pointed out that, "the recent victories in the Egyptian and Tunisian constitutions brought the same issues to mind."

The public disappointments that Kashmiris have had to face over the years shouldn’t dilute democratic aspirations, and extremist ideology, perpetuated either by civil society, or politicians, or the military must, at all costs, be kept at bay.

In 2008, probably traumatised at the assassination of his wife, Benazir Bhutto’s widower, Asif Ali Zardari, claimed to be agonised by the strained relations between the two nuclear powers in the Indian subcontinent. While emphasising the importance of creating bonhomie between India and Pakistan, Zardari had said that the Kashmir conflict could be placed in a state of temporary suspension, for future generations to resolve. The current prime minister of Pakistan, Nawaz Sharif, has mastered the art of public and political volte face.

As I have pointed out before, subsequent to the initiation of the composite peace process by then prime minister of India, Atal Bihari Vajpayee, no substantive measure was taken to hold a substantive dialogue and negotiations with Pakistan. Efforts at the "Quiet Diplomacy" heralded by one time Indian minister for home affairs, P. Chidambaram, were intermittent and interspersed with pugnacious responses to regional demands for greater autonomy. A resolution to the Kashmir imbroglio, which promises peace, prosperity, and progress, requires unprecedented strong political will from leaders, policy makers, and civil society members on both sides of the Line of Control.

Despite the several letdowns, we need to remember that the process of democratisation is an evolutionary one and does not provide instant solutions. To further this process, it is just as important to maintain the pluralistic regional, religious, cultural, and linguistic ethos of J&K.

State and non-state actors who want Kashmiri masses to wallow in grief for eternity, while they climb their way to the echelons of power and a new-found elitism should be called to account. Although the sufferings of the people of Jammu and Kashmir cannot be brushed off, the bitter truth is that it is time to muster the courage to initiate a politics of construction. Can we begin the process of developing a cohesive society with coherent state policies? A fragmented society cannot accomplish anything, either politically or socio-economically. As Abraham Lincoln said in 1858, "A house divided against itself cannot stand."