Reinventing himself is Zohaib Kazi 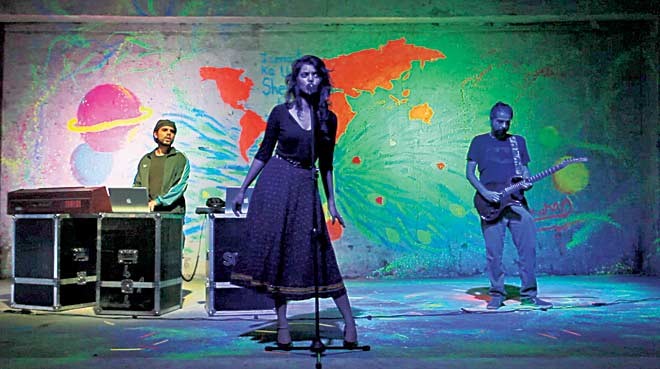 Zohaib Kazi’s latest music videos have piqued my interest yet again. His videos, although simple, succeed in being appealing, cutting through the clutter and shining as individual pieces of art. Given the surfeit of DSLR-shot videos with those ‘fixed-lens, depth of field’ shots that have become the standard, we feel starved for the unconventional, the surprising, the new. Some years ago, music videos had substance and were fun to watch, which does not seem the case anymore.

Zohaib is one of those few artists who is still fighting mediocrity on both audio and video fronts. Currently, he is trying to deliver innovation without the aid of sponsors or labels. His last two videos ‘Kinara’ and ‘Jaagay’ brings to mind the phrase ‘it’s not the machine, but the mind behind the machine’. Keeping in mind that Zohaib juggles his own musical undertakings with a day job at Frequency Media/Coke Studio, where he has been managing operations for the project for the last four years, I decided to get candid with this multitasker and ask straight up… "Who are you and what all do you do exactly?"

He laughs hysterically when asked this, answering:

"I find it really funny that everyone’s been asking me ‘Who are you exactly?’ In the past month, there have been so many situations, ranging from Q&As with RJs and journalists to job interviews, where people have sat down to understand who I am. My standard reply has been ‘Well, even I don’t have a term for it right now’. Someone labeled me recently as a ‘media think-tank’. I think I’ll go with that term". Having established this, we start the interview finally…

Instep: Tell us about ‘Kinara’ and what was it like collaborating with Omran Shafique and Sara Haider?

Zohaib Kazi: ‘Kinara’ was a song I wrote a couple of years ago. It is a track/chapter from my upcoming sci fi-inspired album/novella ‘Ismail ka Urdu Sheher’. I just wanted to capture the vibe of this fictional planet in an audio/visual experience. For me to do that, my first step was to come up with something that I hadn’t heard before – a new-age fusion of East and West but with an indie sound. One thing led to another and I had a tight three-minute number ready, so after taking help from various singers along the way, the universe had plans for it to conclude with Sara and Omran. Do I need to say more about the two? Both of them are extremely talented and very versatile musicians. It didn’t seem like work. I think all of us had too much fun with it because we weren’t following a norm or a genre, so I allowed them to do whatever came naturally. I love them both!

Instep: What about the ‘Kinara’ video?

Zohaib: I went through the video draft board multiple times in my head. After which, I shared the track with a friend/colleague/partner-in-crime/director Kamal Khan. He suggested that I should go all neon on this and my search for neon colors commenced. While most people told me that it was impossible to make it happen due to my budget, I roamed all around Karachi to locate them and with the help of Umair’s (Shadab) lighting expertise, we were able to achieve the impossible. The USP of the video was the graffiti on the wall and I didn’t want a very westernized spray paint version, I wanted something that was very eastern, something that boasts of our culture in a new-age sci-fi way, and has a personality of its own. I was lucky to have found Talha Kehar who shares no credit for the beautiful wall mural. The rest was in the hands of Kamal and Bilal (editor); they understood the magic instantly and I don’t think anyone else would have done justice to it the way they did. Thanks to the whole team for believing in my half-crazy imagination.

Instep: Where did ‘Jaagay’ come from? I know you have never mentioned it and it’s not from your album. How did it come about?

Zohaib: Karachi can weigh down on your mind (I love the city nonetheless) so I took a break and went to Azad Kashmir with my friends. We had a camera, a guitar and by no means, had we planned it out. Ahsen Ali, a friend who was a D.O.P, kept pushing the idea of a music video and the last thing I wanted was me sitting with a guitar, while the focus shifts from the guitar to my face! I hate it, it was done to death, ‘buss hogya na, ab agay barho!’ So I went all Sherlock Holmes in my head to look for a video idea. I had seen many videos made in a similar fashion on Youtube, so I thought why not adapt the idea in a very Pakistani way. Let us show off what Pakistan is made of! It is so beautiful! I then dug deep into my phone to look for a song that I had prepared and that was it. We kept stopping at locations and with the help of the grid in the view finder as well as the grey muffler I’m wearing in the video, we locked a distance and we kept on shooting until eventually we ran out of batteries.

Instep: Also, it sounds nothing like your previous music pieces, it’s so acoustic without any ambient embellishments. What’s the concept behind the whole piece?

Zohaib: I’ve already earned a reputation of taking years to finish things, so I said to myself ‘I won’t take a day more than three to complete it and I did. There was so much I wanted to do with it, in my opinion it is incomplete but sometimes it’s better to put things out rather than sitting on it.

Another aspect of this song was that I wanted to put my song writing skills to test for fun’s sake. I usually have a very ambient style of song writing that’s surrounded by a lot of modulations and custom delays on my songs, so I wanted ‘Jaagay’ to be a song for purists, completely organic. Very basic guitars, drums bass, good melody and nice lyrics.

Instep: So, you’re the acting producer on your videos too? Are you planning to venture into music video productions?

Zohaib: I have produced all of the videos I have been involved in minus ‘Maan lo’. I like being involved on all levels from concept to production and design to post production, though I don’t impose anything on the directors. I float ideas and share my imagination and try to create an atmosphere where it becomes fun for everyone. By the end of it, everyone is as excited as I am, claiming their share of ownership, which is exactly the way I like.

I love doing videos. I have a few queries for videos lined up. Let’s see, I may venture out to that field, provided the projects interest me.

Instep: The last leg of this interview … since you’re a part of the Frequency Media core team that produces Coke Studio, what did you and the rest of the team feel when Rohail stepped down? How would you describe your experience working for Frequency Media?

Zohaib: Rohail is an innovative hero of our generation. The guy is a genius to have jump-started the whole music scene not once, but thrice. Once during his Vital Signs tenure, second during the Battle of the Bands and now with Coke Studio especially at a time when musicians were banging their heads against the wall for bad record deals, foreign content, etc. I think the whole core team of FM has found it to be a privilege to be a part of this mega project. We all love Rohail and we’ll definitely miss sharing the same office space with each other as a team. We have had some memorable experiences there and have witnessed many. Like I tell everyone, it was as if playing for the Pakistan cricket team and coincidentally, we were 11 people too… (laughs). Every ending has a new beginning. We’re all really excited to see what’s next. On a personal front, I’m fortunate to have worked directly with industry pioneers i.e. Rohail and Umber.

Instep: So what’s next for Zohaib Kazi?

Zohaib: I’m in talks for something really interesting, if the negotiations pull through. I guess that’s going to keep me really, really busy.

But do watch out for another music video, it’s called ‘Hum Naujawan’. It’s a one-of-a-kind animated video. The video has taken around two years to complete. The whole video’s been digitally hand drawn.  Bahut mazaydaar scene hai…

Reinventing himself is Zohaib Kazi