"Haniya is my sister. I have to support every decision she makes..." 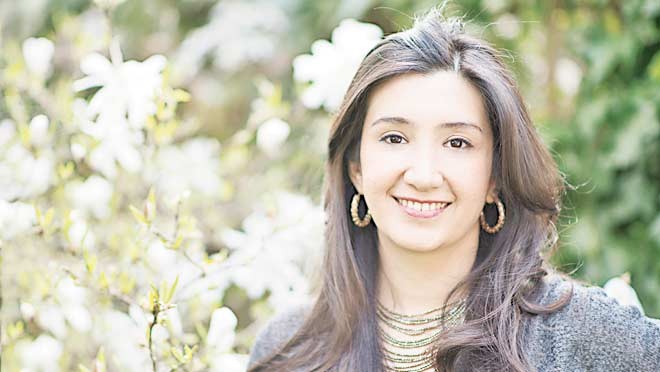 Zeb Bangash and Haniya Aslam have made it to the soundtrack of Imtiaz Ali’s upcoming film, Highway. So, what’s the catch? The majestic and selective A.R. Rahman is the man behind the music.

"We’ve been following A.R Rahman’s music for years and we really enjoyed working with him. He’s not necessarily shy but he is very thoughtful and makes you comfortable. He has a great team," smiles Zeb as we discuss one of India’s finest musicians, A.R. Rahman, the myth and the magic.

For Zeb (and by extension, Haniya), it was a humbling experience when Rahman recounted that he was familiar with their music and their Coke Studio appearances.

Zeb was in Karachi because she was a participant in the then ongoing Karachi Literature Festival. By the time this article goes to print, the literary world will have moved onto Lahore Literature Festival and Zeb will be in India.

Zeb Bangash is one half of the musical group the world knows as Zeb-Haniya or Zeb and Haniya. Since making their debut in 2008, Zeb and Haniya have managed to carve a space for themselves that is unique to them because they cut across all demographics with natural ease.

Knowing all this hasn’t converted Zeb Bangash into a diva. If anything, the years have given Zeb wisdom about how to operate in an industry that lacks infrastructure, resources or any semblance to any actual ‘industry’.

In person, Zeb is incredibly sweet and surprisingly forthcoming about the future of Zeb and Haniya as well as her solo career.

In Zeb’s case, it is just a matter of musical progression and exploration. And she’s not shying away from it.

Are they breaking up?

There are rumours that Zeb and Haniya’s musical journey has ended because Haniya is pursuing a degree in Canada and Zeb Bangash featured on the soundtrack of Madras Café alone.

"Haniya is in Canada and I’m here. This was an accidental career for both of us. We made an album, and it is exhilarating," says Zeb, while insisting that I eat.

"Haniya has always been a bit of a thinker and this was her passion – understanding what we do. We talked about it before she left and we’ve made music so Zeb and Haniya stuff will continue to come out."

The plan, says Zeb, is for Haniya to come back. But, it is also a personal relationship for Zeb and Haniya since they’re cousins.

"Ultimately she’s my sister," smiles Zeb. "I have to support every decision she makes and the musical connection we have can’t be taken away. Her happiness and my relationship with her is the most important thing to me."

It is endearing how Zeb mentions Haniya, whether we’re talking Coke Studio, or monopolistic record labels. I’m looking at you, Fire Records.

These days, Zeb is exploring herself as a musician and a vocalist and that’s never, ever a bad thing. She is also a part of a new group called Sandaraa. It features her alongside a host of Brooklyn musicians as they explore "South Asian material (from Balochistan, Afghanistan and beyond) while blending it with the sounds of Eastern Europe, the Balkans, and more".

Ask Zeb about Sandaraa and she’s thrilled with the way the project has shaped up. "It is really exciting and it’s about connecting our region to a larger region."

Zeb Bangash is very clear about how the first album happened.

"We got crazy amounts of support from the musicians," says Zeb.

She maintains that it was the support of Mekaal Hasan and Gumby in particular that made the debut album possible.

"Gumby called every other month from Karachi and asked us about how the songs were going. He suggested that we’ll work together and we just thought it was a joke. It was really very sweet," says Zeb.

Eventually Gumby was mad at them, confesses Zeb and laughs. "He was angry and he called and said ‘I’m a professional musician and I’m not here to waste my time… so you want to do this or not?’ We met him and it just took off from there."

Mekaal Hasan is the other person who made Chup! possible.

"Mekaal literally shoved us in the recording studio and in 30 minutes or so, we had our first recorded demo. I remember being in my car, listening to the music and screaming. We called our friends over and we heard ourselves on tape for the first time. So without these guys, we never would’ve had our album."

Perceptions can be deceptive. Majority of musicians may be men, but that has never been a problem for Zeb and Haniya.

"The music industry has always been very supportive. It gets difficult with the media. TV channels are just very disrespectful. Journalists can be vindictive," she trails off.

Zeb recounts a story about being pursued by one morning show for six months. When Zeb agreed to do the show, the talk show host had no idea who she was. To be fair, expecting anything remotely professional or sensible from our glorious morning shows is a mistake.

Another issue is live shows and how the idea of sound engineering is lost on many, if not all, organisers.

"You can have great equipment but it doesn’t necessarily translate into a good live show. You need to have an understanding of sound and music to put up good shows."

However, the issue of sound in live shows also means having live concerts, ticketed events and they seem to be disappearing.

"Security is so bad that we can’t have any concerts but there are dozens of fashion weeks happening? I find that strange. I believe that the government should sit down and have a conversation about how to aid and encourage music in Pakistan," says Zeb.

Another album or two

After working with producer extraordinaire Mekaal Hasan on their debut album, Zeb and Haniya have collaborated with Jamal Rahman (True Brew Records, Lahore) for their new album, nay, EP.

It is a shorter album, ergo; it is called an EP and will feature five or six songs.

Monopolistic record labels (Fire Records) have made it difficult for artists to release their albums. In the meantime, there is a music video coming out from the duo.

"I think Jamal has done something amazing with the sound and we’ve stepped out of our comfort zone."

Zeb and Haniya are also teaming up with Shantanu Moitra and Swanand Kirkire for a collaborative album. The four got together in 2011 for a song called ‘Kya Khayaal Hai’ (The Dewarists).

"We’ve just done the music right now but it will be great if we can release it at some point. It’s just about getting all the stuff together and seeing where we go from here."

Having spent years in different parts of Pakistan, Zeb Bangash is proud of her heritage and disappointed that the media has not done a very good job of portraying it.

"Balochi music is one of the richest traditions and one of my favourites. It is unfortunate that we have no regard for our cultural heritage, all of it."

Zeb laughs as I tease her about being an ‘army brat’ because she says that the army teaches you discipline and it has helped her explore Pakistan from a young age.

"My father is former military. I’ve lived in Quetta. I am from a Pathan background so I’ve grown up around Pashto and Dari songs. I grew up in Punjab so I understand Punjabi. I have relatives in Mardan. I don’t speak Dari but I sing Dari songs."

The flair for language and tradition will continue to find its way in Zeb’s music. As for Zeb and Haniya, there is no need to worry since this is one act that is beyond fame and fortune.

"Haniya is my sister. I have to support every decision she makes..."