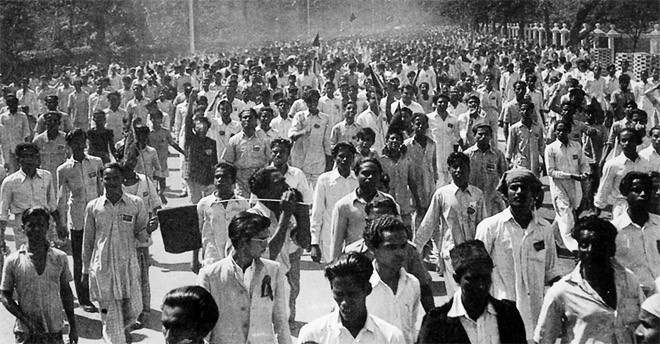 Tracing the genesis of Bangladesh provides ample evidence that religion alone cannot glue people in a multi-national federation. Cultural and economic rights are the real building blocks to cement nationhood. Language issue laid the foundation of Bengali nationalism that eventually eclipsed an obfuscated two-nation theory. Civil-military chicaneries and atrocities together relegated East Bengal into West Pakistan that sprung as Bangladesh in the later years.

The ominous language conflict reared its head even before the country emerged. The distinguished Bengali poet Farrukh Ahmed wrote in an article entitled "Pakistan: State Language and Literature", published in a 1944 issue of the prestigious Bengali monthly magazine Saogat (Calcutta), "Even though it is generally admitted that the state language of Pakistan -- at least East Pakistan -- will be Bengali, some so-called educated persons of East Pakistan have expressed the unwise, shameful opinion that if Bengali language becomes the state language it will be destructive to Islamic culture. I am surprised at the ugly, defeatist mentality underlying this viewpoint." It shows that seeds of discontent were sowed when the country exited only in the embryonic form.

The issue of Bengali language testifies the scale of inaptness and lack of prescience that prevailed in the leadership of a fledgling state. Loath to Bengali culture can be judged from the fact that Khawaja Shahabuddin, the then minister for information, issued a statement that Tagore’s music and writings should be banned. Rationale behind the narrative on both sides can be assessed without any prejudice after decades are past.

Datta, a Congress Leader, claimed on February 25, 1948 that out of 69 million people, 44 million speak Bengali in the country. He proposed an amendment that Bengali, along with English and Urdu, should be accepted as a language of the Assembly. The then prime minister, Liaquat Ali Khan, flippantly replied "Pakistan has been created because of the demand of a hundred million Muslims in this sub-continent and the language of a hundred million Muslims is Urdu. Pakistan is a Muslim state and its lingua franca is the language of the Muslim nation and that language can only be Urdu and no other language." The later assertion was mere obduracy stemming from a cultural conceit without any convincing substance.

A predisposed leadership of West Pakistan construed the proposed amendment as a precursor of dismemberment of Pakistan. The titular chief minister of East Bengal, Khawja Nazimuddin, also opposed the amendment. He was a spineless administrator installed in the province without any legitimacy. Rejection of the amendment stoked splenetic reaction and a province-wide strike and protest demonstrations were organised by students on March 11, 1948.

In Dhaka, police retaliated with full might, injuring 200 and nabbing nine hundred protesters. The incident rallied political leadership to defend cultural rights of Bengalis. Hussain Shaheed Suharwardy, who later became prime minister of Pakistan, in a statement, said if any attempt is made to change the language of any group of people, a strong protest is quite natural.

Influential citizens of Sylhet issued a statement saying that if Jihad is required to keep Pakistan together, we will be the first ones to jump into it. But we are determined to give the right place to Bengali, Sindhi and other languages of the country. Nazimuddin succumbed and held a meeting with All Party State Language Action Committee. He placated them by agreeing to move a special resolution in the April session of East Bengal Legislative Assembly to declare Bengali a state language along with Urdu.

Jinnah tried to glue discrete cultures and blend them into one nation. At this critical juncture, news of his visit to Dhaka in March 1948 was received with great fervour. However, the subsequent events did not portend well. On March 21, while addressing a humongous rally at Race Course ground, he unequivocally said "let me make it quite clear to you that Urdu and no other language will be the state language of Pakistan".

He chided the protagonists of Bengali language by saying that "anyone who tries to mislead you is really the enemy of Pakistan. Without one state language, no nation can remain tied up solidly together and function. Therefore, so far as the state language is concerned, Pakistan’s shall be Urdu." He warned the people not to fall into the trap of the enemies of Pakistan. He went on to declare that Pakistan would not tolerate the enemies, the fifth columnists and the quislings, and if they continued to do what they seemed to be doing then the Pakistan government will take stern measures against them."

During the Convocation address in Curzon Hall at the University of Dhaka on March 24, he reiterated that there will be only one lingua franca, and that language should be Urdu, and cannot be any other. "The state language, therefore, must obviously be Urdu." To his utter chagrin, some students in the audience shouted: "No. No." He was visibly shocked and after a moment of silence, in his characteristically emphatic voice, he repeated: "Urdu and Urdu only will be the state language of Pakistan. A language that has been nurtured by a hundred million Muslims of this sub-continent, a language understood throughout the length and breadth of Pakistan and above all, a language, embodies the best that is in Islamic culture and Muslim tradition."

As an intelligent leader, he tried to defuse the tension and met the representatives of the State Language Action Committee. Kammrudin Ahmad, a leading member of the delegation, writes that Jinnah remained firm and said that if there were more than one state languages; Pakistan’s security would be endangered. On March 28, in his farewell message to East Pakistan, broadcast from Radio Pakistan Dacca, he once again announced that no government worthy of the name can, for a moment, tolerate such gangsterism and mob rule from reckless and irresponsible people, but must deal with it firmly by all the means at its disposal.

Jinnah’s stone-hard stance dampened all hopes of Bengalis language champion. The students of Dhaka University responded by announcing to celebrate the national language day and Rabindranath Tagore’s birthday with great pomp. Habibullah Bahar, a prominent political leader who was then minister for health in the East Bengal cabinet, presided over the general meeting of the organisers and also chaired one of the public sessions of the festival.

The reaction in West Pakistan can be judged from the press reports and editorials carried by the influential Muslim League daily newspapers The Dawn and The Morning News, which called for punishment to the organisers of the Tagore festival. The organisers and participants in the festival were dubbed as stooges of the Indian Hindus and enemies of Pakistan.

The issue continued to simmer. On January 27, 1952, Prime Minister Nasimuddin announced at a public meeting in Dhaka that the recommendation of the Basic Principles Committee was that Urdu alone would be the national language of Pakistan. It proved to be the proverbial last straw on the camel’s back. A large public meeting was held in Dhaka on January 30 under the auspices of the University Committee on National Language.

East Pakistan Muslim Students League convened an All-Party meeting on the following day. A general strike was announced for February 21 -- the date when the East Bengal Legislative Assembly session was to be held. The government tried to preempt the move by smacking section 144 to prohibit meetings and processions in the city. Yet the student leaders remained unfazed. As the students marched toward the university gate, the police greeted them with batons and tear-gas shells. Skirmishes intensified and at around 3:30 pm, the police resorted to firing. Two young men, Abdul Jabbar and Rafiuddin Ahmed, were killed on the spot and Abdul Barkat succumbed to wounds in hospital on the same evening.

Brutal killings triggered incendiary reaction and on the morning of the 22nd, the building of The Morning News was set on fire and its press destroyed. Abul Kalam Shamsuddin, editor of the influential newspaper Daily Azad, as a protest against the shooting, resigned from the Muslim League Parliamentary Party. His newspaper rescinded its pro-Muslim League policy and carried black-bordered coverage of the killings. The students erected a monument called Shaheed Minar near the gate of the Medical College as a mark of respect for the Language Martyrs. According to the government reports, 9 persons were killed in the police shooting. The Language Committee claimed 39 killed and many injured.

The movement got a shot in the arm when Fazlul Haq resigned from the Advocate General’s position to organise the opposition against the Muslim League. The hatred for the central government and the Muslim League culminated in the startling result of election in March 1954. The Awami League took the lead to form a pan-Bengali political alliance. The alliance was termed the Jukta Front or United Front and formulated the 21-point Charter, to fight the Muslim League.

The United Front earned a landslide victory with 228 out of 237 Muslim seats trouncing the Muslin League that lost the grace and eked out only 10 seats in house of 309. Bengali was made national language along with Urdu as a retrofit in 1956 constitution but the damage was already done. Bengali language movement thus shaped the inexorable Bengali nationalism that eventually carved out Bangladesh.