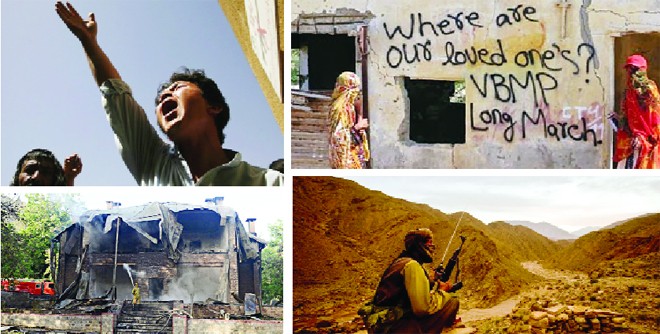 Balochistan of today is in turmoil because it is a huge battleground; arrayed on one side are the freedom-seeking Baloch while, on the other are the state, the pro-establishment sardars and politicians, the fundamentalist forces, and those hungry for Balochistan’s resources.

The Baloch are under attack as they try to thwart designs on their land.

The Pakistani state, obsessed with its concept of religion being the basis of nationhood, refuses to concede anything; this intransigence has resulted in 66 years of injustices against the Baloch, which intensified since the year 2000. The mass graves discovery in Tutak, the more than 800 bodies of abducted Baloch dumped in Balochistan and Karachi, and the 18,000 missing persons are the result of the state’s refusal to learn from what happened in Bangladesh in 1971.

The blowback of the state atrocities is a full-blown political and armed insurgency in which Sarmachars fighting for freedom respond to the state excesses with ambushes and improvised explosive devices (IEDs), killing and maiming security forces as happened on January 31 in Awaran and Quat Mundai on February 10.

The insurgency previously limited to Marri and Mengal areas today reaches every nook and corner of Balochistan, with Makran making up for its past inactions. Its reach and depth can be measured by the fact that Dr Allah Nazar-led group -- Baloch Liberation Front (BLF) -- easily kidnapped Deputy Commissioner Kech, Abdul Hameed Abro, and Tehsildar Tump Hussain Jan in Tump on February 13 this year and later released them.

The Tutak Commission’s visit to mass graves confirms the nexus between death squads and religious outfits and the fact that state outsources terror against Baloch activists and tolerates attacks against Hazaras.

The statement of Balochistan’s Inspector General Frontier Corps (IGFC), Major General Ejaz Shahid, to the Senate Standing Committee on Interior, while demanding more money for his 47,298-strong force last month, explains the ground situation even better. He stated, "We are struggling to establish the writ of the government along Balochistan’s western border. We are quite far away from even playing the national anthem in state-run schools in Panjgur, Turbat [Kech] and adjacent cities in Makran Division".

He also claimed that due to their five-month long operation, "The flag of Pakistan is fluttering over many schools for the first time after we removed the flags of banned outfits… in many schools, anti-state literature was being taught on the state’s expense."

The insurgency situation isn’t much different in Marri-Bugti and Bolan area where Baloch Liberation Army (BLA) and Baloch Republican Army (BRA) operate and, apart from attacks on security forces, frequently blow up gas pipelines and electric pylons. The on-ground situation is that the security forces, cocooned in their outposts, have limited worth and are forced to conduct frequent operations which result in heavy collateral civilian casualties, antagonising the people further.

On the political front, those fighting for freedom boycott elections and people respond massively; consequently, the recent local government elections were held in two phases as 600 constituencies were uncontested. In general elections, too, Baloch participation was minimal as the present Deputy Speaker, Qudoos Bizenjo, won the PB Awaran 41 seat with only 514 votes.

A unique and poignant political protest for the missing, the killed, and for Baloch rights via Voice for Baloch Missing Persons’ (VBMP’s) Quetta to Islamabad Long March led by Mama Qadeer and Farzana Majeed, has taken the political battle to the establishment’s home turf. It highlights the most radical change wrought by the present struggle, i.e., the Baloch women becoming equal partners in Balochistan’s political struggle.

The Pakistani establishment has tried various stratagems to stop the rising tide of anti-Pakistan discontent and the increasing support for a free Balochistan. Previously, pro-establishment sardars figured prominently in the establishment’s attempts to pacify people with political and tribal trappings but that didn’t pay off. Now, it has changed tack and decided to employ those who can be palmed off as nationalists and help create the charade of nationalist politicians’ government.

The centre doesn’t fare better either; on November 28, 2013, Defence Minister Khawaja Asif promised the Supreme Court that Balochistan’s 738 missing persons would be recovered before December 10 but none was. Both the centre and the province seem subservient to the army, which conducts the policy in Balochistan.

Since Dr Malik’s installation as Chief Minister a new impetus has been given to the patently false claim that the Baloch are deciding their matters themselves. Whenever important decisions are taken, Commander Southern Command, Nasir Janjua and IGFC chaperone the so-called nationalist government. Dr Malik’s writ stops at his office door; he had promised implementation of  the Supreme Court (SC) order that 178,000 Bugtis displaced by the army action in 2005 be allowed to return to Dera Bugti. However, when displaced Bugtis reached the Doli checkpost, the FC refused to allow them to enter Dera Bugti; both the SC and Dr Malik remained helpless spectators.

Balochistan government’s counsel, Shahid Hamid, admitted in the SC that none of the 16 FC officials nominated in missing persons’ cases appeared before the police as the FC wasn’t under the government control. Also, the Balochistan Assembly recently admitted an adjournment motion on the insulting attitude of the FC personnel towards the people. Dr Malik plays second fiddle while, in fact, the army and FC run the government in Balochistan and are answerable to no one; a culture of impunity, like that during the 1971 horrors in Bangladesh, prevails in Balochistan.

The tussle between the pro-federation and anti-federation elements isn’t a new phenomenon. But it has intensified as the government tries to pit the Baloch against each other. Incidentally, during the October 2013 SC bench hearing allegations against Mr Nazir Naji, the attorney general disclosed that Rs400 million from Intelligence Bureau’s (IB’s) secret fund had been used for counter-insurgency in Balochistan in 2008-09; this was used to create death squads as abductions and killings began in earnest in 2008.

Death squads of Siraj Raisani and Shafique Mengal abducted Baloch activists while Sarmachars retaliated with attack on Siraj Raisani in July 2011, which killed his son and a remote controlled bomb attack on Sanaullah Zehri in Zehri Tribal Territory on April 16, 2013 killed his relatives, including a son.

Balochistan is in a mess, resulting from visionless and misguided policy of the establishment, which believes force is a panacea for all those nations who, like Baloch and Bengalis, demand their rights while appeasement for all those with a veneer of religion. Consequently, the Baloch are at the receiving end just as Bengalis were while religious outfits are mollycoddled. Unbiased reporters like Naziha Syed Ali and Mahvish Ahmad visiting quake-affected Awaran reported that international aid organisations were banned while religious outfits were facilitated and even helped to set up madrassas.

Sectarianism is a scourge visited upon Balochistan by the state which, hoping to gain advantage, had outsourced ‘jihad’ to religious organisations -- first in Kashmir then in Afghanistan -- and now turns a blind eye to their activities against Hazaras and Baloch nationalists. Balochistan has become the killing fields for Hazaras and Shias targeted by Lashkar-e-Jhangvi (LeJ), Talibans, and other sectarian outfits.

The Tutak Commission’s visit to mass graves confirms the nexus between death squads and religious outfits and the fact that state outsources terror against Baloch activists and tolerates attacks against Hazaras. The horrific attacks against Hazaras intensified after Usman Kurd and Daud Buledi escaped under suspicious circumstances from highly secured and improvised prison in the Quetta cantonment on January 18, 2008. The horror for the Hazaras is unending and has forced them to undertake risky means for migration abroad.

The relations between the Baloch and Pashtuns, which have never been ideal, became antagonistic with the influx of Afghan refugees. The state exploited this and ensured that the indigenous Pashtun population leans towards the state rather than towards the Baloch who demand freedom. This they successfully achieved through patronisation and rigged elections; after the largely boycotted 2013 elections, they ensured that Pashtuns throw in their lot with the state by making Pakhtunkhwa Milli Awami Party a coalition partner and Mohammad Khan Achakzai the governor. It is important that both communities understand that mutual animosity and hostility will leave them both at the mercy of the state.

The social and political tapestry in Balochistan has seen changes over time in proportion to Pakistani state’s indifference and atrocities unleashed in the name of ‘national interest’. The Baloch people have given up on justice from the state and do not trust those inclined to further the centre’s interest. For them, the difference between the so-called nationalists like Akhtar Mengal and Dr Malik is only of the degree that they are willing to serve the federation.

In the past, politicians like them and the pro-establishment sardars defined and determined what and how people think and act but now it is the Baloch resistance that defines the social and political relations in Balochistan and people proudly identify themselves with Sarmachars who struggle for their rights. In such a situation, the prognosis for the solution to the Balochistan conundrum will shift from bleak to very bleak.