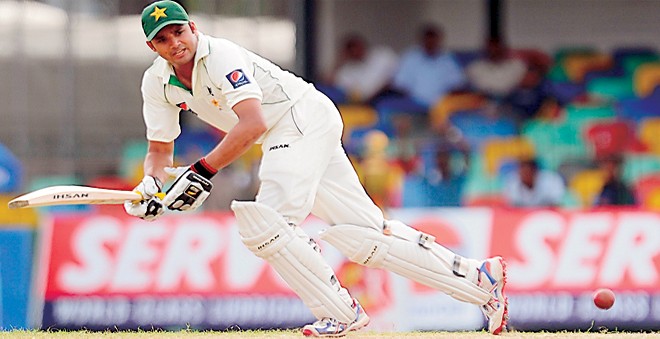 It seems Pakistan have finally got a strong middle-order after a long, long time, for Tests as well as One-day Internationals (ODI). In the longest format of the game, it has the services of veterans Younis Khan and Misbah-ul-Haq and the young duo of Azhar Ali and Asad Shafiq. All four of them are equally capable for the 50-overs format. Besides, there are Umar Akmal and Sohaib Maqsood to boost the middle-order in the ODI format.

By making a century on the fifth day against Sri Lanka in the third Test of the recent series in the UAE, Azhar Ali proved he is a dependable batsman and can handle tough situations. In my opinion, Azhar is the best discovery for Pakistan since Younis Khan made his Test and ODI debuts against Sri Lanka in 2000. None of the other batsmen who entered international cricket in these past 14 years has been as good as Azhar is, at least when comes to reliability.

Since making his debut against Australia in the summer of 2010 in England, Azhar remained a consistent scorer till at least the end of 2012. In 2013, he suffered a slump, and was accordingly dropped. But his comeback was remarkable. His 103-run knock was an extraordinary achievement. The fact that he hit only six fours in his innings and still maintained a strike rate of over 75 runs shows his class.

Some people erroneously think that Azhar is only a Test match player. This thinking delayed his ODI debut, but when it came he showed he had the guts to excel in this format as well. The young man has scored at an average of more than 41 in the 14 ODIs he has played. He has been kept out of the team since January 2013 without any rationale. He deserves many more chances. Why drop a batsman who averages 41?

Asad Shafiq failed to live up to expectations in the series against Sri Lanka, but his two centuries against South Africa in 2013 -- the first in Cape Town and the second in Dubai -- were enough to tell everybody that he will go a long way just like Javed Miandad and Inzamam-ul-Haq. Making two centuries against a bowling attack that has the finest fast bowlers of the world in Dale Steyn and Morne Morkel is no ordinary feat. The failures of the celebrated Indian batsmen who had been shining in India on the South African soil should be kept in mind here.

Umar Akmal continues to do well with the willow -- in both ODIs and T20Is -- despite being given the additional responsibility to keep the wickets. His ability to clear the field is an asset for Pakistan in the limited-overs cricket. But it will be better for the country if he is relieved of the wicket-keeping gloves and there is a specialist stumper to do that job.

Then there is Sohaib Maqsood -- the find of the year 2013. He is a fine batsman who can score runs at a fast pace if the situation demands so. His average of 40 in the 10 ODIs he has played is quite impressive. His record against the formidable South African bowlers -- 56, 53, 22, 42 and 25 -- says it all. If he continues to do so well, Pakistan will not have any problem even after Misbah retires.

So with this blend of experience and youth available, Pakistanis need not worry about the future of their team -- at least for the next two years or so in which time Misbah and Younis are unlikely to retire.