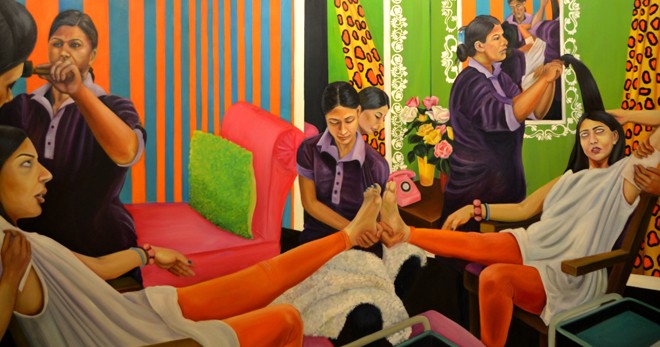 The late 1970s and 80s under General Ziaul Haq were an undeniably tragic time for Pakistan’s once thriving artistic landscape. As is with most totalitarian regimes, women were the primary targets in this campaign to ‘Islamise’ an ideologically flimsy state. Female writers, publishers, artists, curators, musicians and actors faced the likely prospect of extinction.

In 1978, famed kathak performer Nahid Siddiqui’s programme ‘Payal’ was abruptly taken off air by the state television channel. A ban on dance, for purposes of public morality, had deprived the country of Siddiqui’s innate grace and electrifying presence on stage. On her way to London from Lahore, Siddiqui was suddenly offloaded from her plane and informed that she could not leave Pakistan as her name had been placed on the Exit Control List.

In order to travel, the kathak performer required permission from Pakistan’s ministry of culture.

Hours of interrogation later, Siddiqui was granted permission. But, not without a heavy price to pay. She could only leave Pakistan and travel abroad after signing a document, prohibiting her from performing kathak lest it was permitted by the government of Pakistan.

"Even when I performed prior to the ban, it was under immense pressure from the establishment and rightwing forces in the country. Still, a lot of people supported me and my craft," she says, adding, "I’m scheduled to perform on February 22, 2014 at the Lahore Literary Festival. My students of kathak will be on stage with me. It is extending beyond me now and people from various professions, such as engineering and architecture, are being trained in kathak dance."

Today, Nahid Siddiqui’s shows take place across the country, attracting classical dance lovers and devoted fans from all walks of life. She is the recipient of Pakistan’s Pride of Performance for the Arts, awarded to her in 1994 by the late former Prime Minister Benazir Bhutto.

Endowed with this new creative license, Minaa Mohsin chooses to comment on ‘excess’ and its discontents in the upper-echelons of Pakistani society. Her paintings typically portray female subjects engaged in mundane, self-indulgent activities against the backdrop of "potentially repulsive" luxury. "Beauty and repulsion accompany each other", says Mohsin, adding, that "surrounding one’s self by beautiful subjects, like sofas and ornate cushions, can be an act of hoarding, of indulging in affluence. It’s pretty to look at, but likewise repulsive."

Encountering Mohsin’s paintings at first, one is struck by an agonisingly bright colour palette of fuchsias, bold reds and oranges. "Besides being a fan of bright colours, I use this palette as it attracts the viewer almost immediately. It also shows the artificiality of this world created by the subjects of the paintings. These colours are alien to the landscape of Punjab, marked by hues of beige and brown. Imported plants and furniture add to this superficial hyper-reality," she says.

When asked to explain as to why her subjects are invariably female, Mohsin’s reply is decidedly apolitical. It is purely circumstance. "I’ve experienced excess through the lens of being a woman with women friends who belong to the higher rungs of society, accompanying them to beauty parlours, seeing them at home with servants, etc. I’ve had the experience of going to an elite all-girls school in Lahore, where class consciousness was a real phenomenon. It’s not my intention to only paint the female body; perhaps I’ll paint men someday, too."

Bilgrami, an artist herself, feels that the obsession with paintings of the ‘oppressed’, veiled Muslim women in the post-9/11 decade are at times "male-driven". "Honestly, I’ve noticed this. In the years following the attacks in New York in 2001, there is an outpouring of art displaying women in burqas, or at the other subversive end, of female subjects carrying weapons," notes Bilgrami, adding, "A sense of sensationalism is there and some artists feel compelled to jump onto the bandwagon for the sake of global attention. Not surprisingly, most of these artists are men. What does a man know about wearing a burqa? A male-dominated reflection of the Eastern women has blinded us to other works of art produced by women, challenging this portrayal."

Widely considered a patron of the arts, Salima Hashmi, Dean of the School of Visual Arts at Beaconhouse National University, finds a sparse landscape being reforested by female artists in today’s Pakistan. "Women have proved, in the years since Zia that they’re not only good teachers and critics of art but that they can also be major visionaries. Something perceived to be a hobby of women before marriage is now being validated as a serious profession, " she says, adding, "Consequently, standards set by men are also being revised by female curators, studio practitioners, and painters. When women and their bodies were targeted by Zia’s regime in the 1980s, they reacted swiftly and used their art as a vehicle of dissent and entered into a broader political discourse. Today, Aisha Khalid is on an equal footing with her Metropolitan Museum of Art-exhibited husband, Imran Qureshi."

"Every time, a male artist produces a piece of art it is seen as significantly astounding and more valuable than that of a woman’s," argues Nabiha Meher Shaikh, founder of Pakistan Feminist Watch. Shaikh, who is also a researcher at the Simorgh Women’s Resource and Publication Centre in Lahore, finds the space for radical female voices limited in the country. "Urvashi Butalia of Zubaan Books [a feminist publisher] in India recently collaborated with Simorgh on ‘sexualised violence and impunity’ in South Asia. The kind of profound and sound feminist theories coming out of India are unmatched in Pakistan. I remember LUMS having a panel on international women’s day with only one woman speaking on behalf of all of us!" exclaims Shaikh.

"If the Zia years give an indicator," says Fauzia Qureshi, a founding member of the Women Action Forum and former principal at NCA, "it is that women will respond aggressively to the limits on their rights".

"We have only just begun to tackle the residues and legacies of Zia’s time in office, abhi bhi safai karni hai!" adds the outspoken Nahid Siddiqui.

“Governments have no role as regulators of news media”

A question of identity