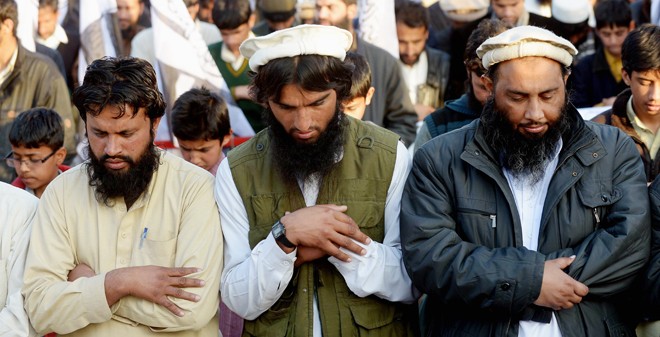 The television screens are blaring the calls for Sharia day in and day out. And in most cases the differences in these demands are such that most of the religious right appears to be contradicting itself.

The suggestion that the Taliban demanded implementation of Sharia came from none other than Maulana Abdul Aziz, member of the TTP nominated peace committee. Later, he termed the constitution of Pakistan as un-Islamic and said that peace talks could only take place under the parameters of Sharia.

Interestingly, Abdul Aziz has been using almost similar jargon which the al-Qaeda chief Ayman Al-Zawahiri used in his book Sapeeda-e-Sahar Aur Timtamata Chiragh (Dawn And A Flickering Lamp) (2011) in which he argues there is no political solution to be sought with Pakistan because the Pakistani constitution is fundamentally ‘in conflict with Islam.’ "The state called the Islamic Republic of Pakistan is, in no way, an Islamic state; neither in terms of the ideological base (its constitution) nor its practices."

Maulana Tahir Ashrafi is probably the only strong but Deobandi voice that has come forth to counter Aziz. He urges Aziz to accept the constitution -- for Deobandi scholars like, Mufti Mehmood and Mulana Abdul Haq, accepted and signed the constitution in 1973.

A majority of religious scholars from various schools of thoughts agree that it is possible to concur to one definition of Sharia, but with Takfiri thinking getting stronger in Pakistan, it seems unlikely.

But is countering this narrative tantamount to opposing religion? It is indeed a pity that we have got into this debate.

Likewise, Mohammad Ali Jinnah in an interview with a Reuters correspondent Doon Campbell in Delhi in 1946 said, "the new state would be a modern democratic state, with sovereignty resting in the people, and the members of the new nation having equal rights of citizenship regardless of their religion, caste or creed".

Maulana Samiul Haq, head of the TTP nominated negotiating team, has stated categorically that Taliban are demanding the enforcement of Sharia in the country. And he, like Aziz and his TTP, follows the same Deobandi school of thought.

The TTP spokesperson, Shahidullah Shahid went a step ahead during an interview on February 11, 2014 to explain the kind of Sharia his organisation is pressing for in Pakistan. He said the Pakistan government’s demand to keep the talks within the parameters of the Pakistan constitution is a pre-condition for peace talks when both sides had agreed not to impose preconditions. "The majority of Pakistanis are Sunni Hanafis -- their’s is the best system and no one should oppose it. Non-Muslims need not fear Sharia as Islam protects the rights of minorities," he said.

In the same interview, he has suggested the name of Mullah Omar as the Amir-ul-Momineen and Mullah Fazlullah having "all the qualities to lead the Pakistani nation".

But a majority of Pakistan population belongs to the Barelvi school of thought that like Deobandis follows Fiqh Hanfia. There are serious differences between Deobandis and Barelvis, to an extent that they term each other kafir. Likewise, Shias are considered kafirs, worthy of being killed, by several Sunni religious scholars. The Shia and Sunnis also differ on the Islamic governance system -- Shias believe in imamat, Sunnis in khilafat.

But these realities and various interpretations of Islamic state may be rendered useless, totally redundant, as the TTP stands for an interpretation of Sharia that only suits its school of thought and has threatened to suppress all forms of opposition.

Some Barelvi religious scholars disagree with the Taliban interpretation of Sharia. "We do not need Sharia of Taliban which allows killing of religious scholars like Sarfaraz Naeemi, allows attacks on shrines, allows slaughter of innocent people and soldiers," says Zia Naqshbandi, religious commentator and columnist, adding that this narrative intends to undermine all of the institutions of the state, legislature, executive, judiciary, and military, from 1947 till present.

"Their forefathers were against the establishment of Pakistan and now they want to disband the country in the name of Shariah. It seems the government has decided to implement the Deobandi interpretation of Shariah," he adds.

A majority of religious scholars from various schools of thoughts agree that it is possible to concur to one definition of Sharia, but with Takfiri thinking getting stronger in Pakistan, it  seems unlikely. Take a cursory look at the last six decades, we do not have one definition of ‘Muslim’ that all agree to. This is documented in the Munir Commission report, compiled in 1954, after interviewing scores of leading religious scholars from different sects.

The report concluded that no two ulema had agreed before the commission to the definition of a ‘Muslim’, "the net result of all this is that neither Shias nor Sunnis nor Deobandis nor Ahl-i-Hadith nor Barelvis are Muslims, and any change from one view to the other must be accompanied in an Islamic State with the penalty of death, if the Government of the State is in the hands of the party which considers the other party to be kafirs. And it does not require much imagination to judge the consequences of this doctrine, when it is remembered that no two ulema have agreed before us as to the definition of a Muslim…" states the report.

It further says, "The Quaid-i-Azam’s conception of a modern national State, it is alleged, became obsolete with the passing of the Objectives Resolution on 12th March 1949…"