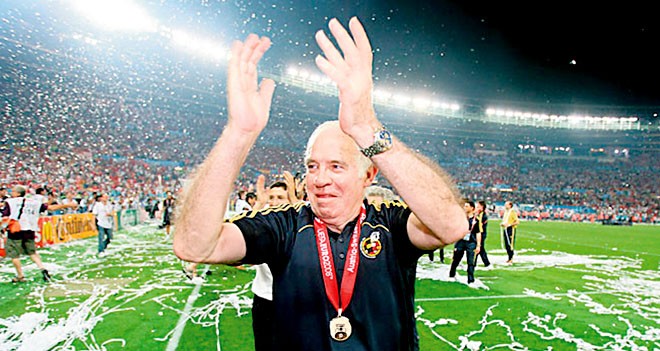 Last weekend, across football stadiums in Spain and beyond, a minute’s silence was observed before kick-off and players wore black armbands in memory of Luis Aragonés, the man credited with changing the course of Spain’s footballing history. He passed away in the early hours of 1st February, aged 75, after losing his battle against leukaemia, a battle he hadn’t told anyone about.

Aragonés’ biggest managerial achievement was leading Spain to victory in the Euro 2008 and, in doing so, ending a 44-year national wait for a major international trophy. Prior to his arrival at the helm in 2004, Spain had been justifiably labelled as the perennial underachievers -- a team brimming with individual talent, playing aesthetically pleasing football but lacking the mental strength required to be winners. Although it is easy to forget now, his first two years were seen as more of the same. After taking over, he employed a short passing playing style focused on controlling possession, which had been made famous by Barcelona, and later became popularly phrased as Tiki-Taka. However, Spain, supremely confident and effective through the group stages at the World Cup in 2006, were torn apart by a Zidane-led France in the knock-out stages. Yet again, they had fallen when it really mattered maintaining a sorry tradition at major finals. The media called for Aragonés’ head but the national football federation decided to continue with him.

Aragonés was confident the mental strength he had begun to instill in his players would eventually bring success but he also acknowledged that lessons needed to be learnt from the bitter defeat against France. Although Spain’s attack and midfield had dazzled, with their co-ordinated movement and purposeful short-passing, their suspect defence had often been left exposed. Therefore, he decided to temper his Tiki-Taka approach with pragmatism, making it as much about defending as attacking. The idea was simple: ‘If we keep the ball, the opposition can’t score’. To steal a phrase from the brilliant Sid Lowe, Tiki-Taka became as much about anesthesia as aesthetics. Aragonés also made some bold decisions in team selection, most notably dropping Ra’l, then the all-time highest national goal scorer. The rest, as they say, is history -- Spain went on a 22-game unbeaten run culminating in a 1-0 win against Germany in the Euro 2008 final. That win marked a permanent psychological shift for La Roja. It became the base upon which they accumulated further successes at the World Cup in 2010 and the Euros in 2012 under the stewardship of Vicente del Bosque, who also acknowledged his predecessor’s contribution stating, "Without any doubt, he [Aragonés] paved the way for such a successful era."

However, to define Luis Aragonés’ legacy only by his 4 years with the Spanish national team, which came towards the end of his 52-year long footballing life, would be akin to defining Daniel Day-Lewis solely by his role in Lincoln, or Sinatra solely by My Way. Prior to being a manager, Aragonés had an impressive playing career. After stints at various clubs at the start of his career, followed by 3 years at Real Betis, he finally joined Atlético Madrid in 1964. As a free-scoring midfielder, he came to be known as Zapatones, or Big Boots, for his mighty free kicks. He scored 172 times in 372 games for Atlético, a club record that still stands, and won 2 La Liga titles and 1 Copa del Rey in the process before hanging up his boots in 1974 to become the manager of the club. Over the next 30 years, Aragonés managed 8 different clubs, and had 4 stints at Atlético with whom he won the league title twice. To dispel any doubts about his affection for the club, he once said "Atlético are my life." It was fitting then, that on the weekend Zapatones passed away, Atlético went top of the league after winning a game in which each goal was followed by a "Luis Aragonés!!!" chant. Aragonés managed more Spanish first division games (791) than anyone else ever. Atlético aside, Aragonés spent most of his managing career specializing in getting the most out of middle-of-the-table squads, always able to play to their strengths and deadly at the counter -- a far cry from the Tiki-Taka that he later came to be identified by.

Aragonés was no stranger to controversy. Most infamously, he was once caught on camera trying to motivate one of his players in training by making distasteful remarks about the skin colour of a player in opposition. For this he was branded a racist, and after initially refusing to apologize, he later admitted he had made a bad error of judgement but insisted he wasn’t a racist. Brazilian and African players who had played under him leapt to his defence as witnesses.

He had his eccentric moments too. Once, he was caught on camera cutting a television cable because it was "suspiciously close" to the dug-out. On another occasion, he told a player to get on with it because there was "nothing bloody wrong with you". The player had a broken jaw.

Xavi Hernandez, the celebrated midfield maestro, was the fulcrum of Luis Aragonés’ Tiki-Taka. If Aragonés was the strategist, Xavi was his executor-in-chief. When Xavi was named MVP of Euro 2008, the reason UEFA gave for the award was that "we think he [Xavi] epitomises the Spanish style of play." Xavi credits Aragonés with the biggest impact on his sporting career and describes him as his "football father". Given the special relationship and success they shared, perhaps it would be best to sum up Aragonés’ legacy in Xavi’s words: "The word football in the dictionary should have on the side of it, a photo of Luis.  Luis is football in human form, football as a persona."