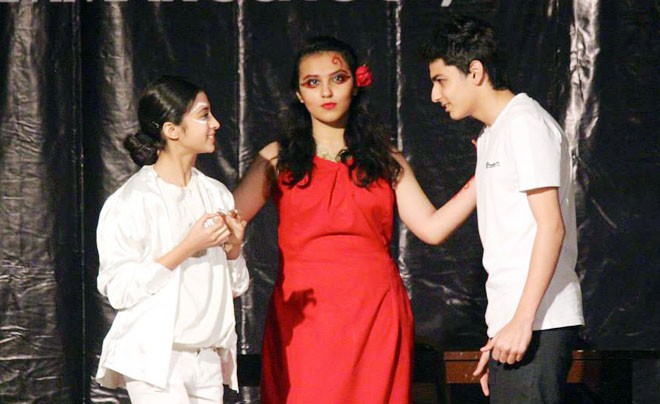 Great show of acting was displayed by the Lahore Grammar Stage on the opening night of ‘Colours and Humours 2014’ drama festival, recently held at LGS 55-Main. An annual affair, the event provides different educational institutions (schools and universities) of the country a platform to compete with each other and showcase their best creative talents.

The school courtyard had a celestial vibe to it as the turnout was as overwhelming as ever. There were two categories: School and University. The latter had two only competitors -- Lahore School of Economics (LSE) and University of South Asia (USA). LSE came up with a power packed comedy full of witty dialogues and satirical puns that left the audience cracking. The play depicted a classroom with students coming from different walks of life. The comic timing of the entire cast of characters was amazing. No wonder, LSE walked away with all the awards in the University category.

There were several teams participating in the School category. LGS-1A1 tried to paint a utopian picture in their play Eve of the End, in which a domestic housewife realises that she has magical powers and she can use them to her advantage. The plot seemed a bit half-cooked but the twist towards the end did elevate the play as it raised a pertinent issue of nuclear devastation.

Hamza Kamal’s much-anticipated troupe from LGS Paragon staged Lollywood, a play that started on a promising note but soon lost its fizz never to catch it back. However, it had its moments which managed to evoke a few laughs from the audience.

Team SICAS presented Silent Whisperers, based on the rather clichéd theme of the ‘seven deadly sins.’ However, it goes to the credit of the play director Amel Ghani, also a journalist, who helped it from becoming jaded. The play didn’t win an award but it secured a creditable mention by the jury at the end of the event.

Another aspect of Silent Whisperers which kept the audience engrossed till the end was the incorporation of mime which made an interesting use of sound and lights. Special attention had been given to the costumes and it showed.

LGS Defence’s Ankahi, which had previously been performed at the LUMS Drama Fest earlier this year, revolved around an autistic girl who faces tremendous difficulties pulling through an unenlightened lot of people around her who try to help her by the use of occult.

Raja Haider, a spectator at the event and also an avid theatre-goer, seemed to like the play for the way "it challenges the norms, values and social stigmas within our society."

Eventually, LGS Defence won two trophies on the awards night -- the Best Actress for its leading lady Eiman and the Best Supporting Actor for Shazreh who played the fake peer’s assistant.

The Best Supporting Actor category had a lot of tough contenders and the judges were found grumbling about the fact that there were no separate categories for the male and female actors.

The school winning the most coveted Best Play and Best Director awards turned out to be LGS-Johar Town. As one of the judges commented, "The play showed the kind of maturity we expect from professional theatre groups such as Ajoka."

Fasihur Rehman who played the puppet was declared the Best Actor.

Considereing, it was a school level competition, other performances by Beaconhouse Defence and USA can be appreciated as they most certainly showed potential.

"It is fairly rousing to see how theatre is always the one medium that holds mirror to the society, the only medium through which young actors with fiery ideas deliver what they believe in without the fear of any regulators," said TV director and actor Sarmad Khoosat, the chief guest on the closing night of the festival.

Earlier, day one saw renowned musician Farhad Humayun gracing the occasion with his starry presence. Humayun also spoke at the end of the first night of performances, commending the quality of plays. "I wasn’t going to sit through the entire event but I must say I kept glued to my seat; such was the quality of work on show," he said, eliciting great cheers from the audience.

The success of ‘Colours & Humours 2014’ drama festival must also be attributed to the management team which included Shehrzade Noor Pirzada, Zeeshanay, Sherbano and Farwa, headed by their drama coach Madiha Gul.