What is morality worth anyway? 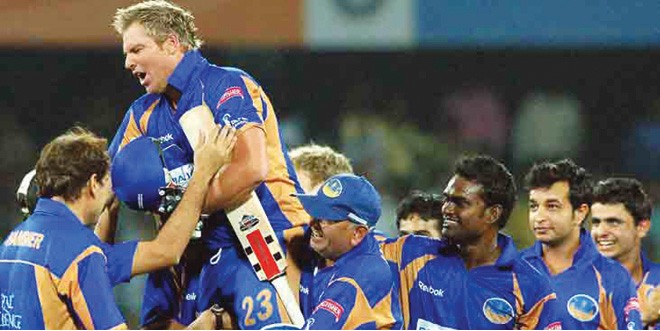 The IPL covers the months from February to May. It is the biggest competition in the world. The argument is made, much like it has been in football since the turn of the century, that the domestic game has exceeded the international game in terms of quality and prestige. The English summer remains as it has for the previous two decades. The Big Bash League is the second tier -- a chance for those on the outside, particularly the Australians -- to impress IPL franchise owners.

The BBL franchises have scouting networks in over a dozen international cricketers. That is where the first great Nepali and Afghan cricketers came to light. The English County Championship remains an anachronism, where the T20 players look for something more; to prove their worth as equals to their predecessors. The four team Test championship, consisting of Australia, England, India and one qualifier, is now as big as the World Cup once was. The quadrennial World Cup remains a great honour, but it stands alone as something worth fighting for in the 50 over game. The Pakistans and the Sri Lankas continue to have bilateral series that no one cares about. The governments of these countries subsidise this, trying to keep the opiate of the masses from dying out. Trying to keep their teams competitive in a world where no one cares about them.

That is the state of cricket a decade or two from now. The ICC F&CA Position Paper draft is the opening gambit for this.

This is not a new prediction. This is something that cricket writers, particularly Devanshu Mehta, have been suggesting for a while now. You could almost say that this was an inevitability from the moment a young Indian side rampaged through the World T20 in 2007, re-energising what may have been lost after the shambolic performance in the World Cup earlier that year. India has more than two-thirds of the finances and the public involved in world cricket. India, and its ever growing middle class, is just too big for the rest. This was clear when Niranjan Shah, the BCCI vice-president said that India couldn’t give a flying toss about international cricket.

"Like in baseball, America is not worried whether any other country is playing or not," he told James Astill, the writer of The Great Tamasha: Cricket, Corruption and the Turbulent Rise of Modern India. The success of the IPL is what has allowed this attitude to flourish. The existence of a thriving domestic 20-over tournament has made the rest of the world unnecessary for India. Why would you want your icons to lose face and value -- why not pit two teams filled with Indians against each other; your market will remain secure.

The sponsors will remain happy, the fans will remain ignorantly naïve, and the cash cow will trundle on. And what if India loses in the World Test Championships or the World Cup? Well, we’ll learn from the English Premier League, which has shown that the abject failures other national side every couple of years is no reason for the product to not become bigger and better every year.

The IPL wants to become the new Premier League; and also wants to become the new NBA. There are active, competitive domestic basketball leagues in places like Greece and Spain, but they remain feeders to the NBA. The dream of the best player in Europe is to be drafted by an NBA franchise. The Olympics and the FIBA World Championships happen every two years; the rest of the time is occupied exclusively by the NBA in the basketball world.

All this assumes one crucial factor though -- it assumes that the state of the game in 2014 has finality to it. As if it is the end of change. Will Australia be the same a decade or two from now? What if Aussie Rules and Rugby League start eating even more into the Australian cricket calendar and talent prospects? What if an excess of Ashes turns people off? If Australia are only playing India and England, and they start losing every series, how much popular will the sport remain?

Is the next generation, that which Cricket Australia aims to attract by the BBL, always consider cricket their second sport, at best? And what of England: they’ve already closed off the general public ever since the rights were taken away from the BBC; already only half of the county cricketers come from state schools (which account for 92% of the student population) in England. Will this reduction of both the market and the talent pool damage cricket in England? What of a generation that has grown up with Fletcher and Flower and does not take the stiff upper lip while losing as a badge of honour?

It makes sense for both of these countries to ally with India to secure, if not improve, their immediate financial future, but what happens when India does to them what it did to the rest. Will they then drag their feet for being treated the way that they had treated others? How long before they realise that it doesn’t take long for the oligarchy to become a monarchy.

And what of Pakistan? I have been told, repeatedly, that the best strategy for PCB right now remains to stand as part of the opposition. If the big three decide to offer CSA to become part of a new big four what happens to Pakistan. Is it worth being the lone vote against nine; to be even more ostracised from cricket than you already are. Already there is little cricket in the country, what happens when Pakistan pisses off, inadvertently, every other country in the world. Of course, it’s moral to take a stand, but to assume that it’s the best possible, or only, stance is naïve. What is morality worth anyway? That is the question the big three have posed, that they will no longer believe in a false welfare system. The free market rules; this is just the beginning.

What is morality worth anyway?