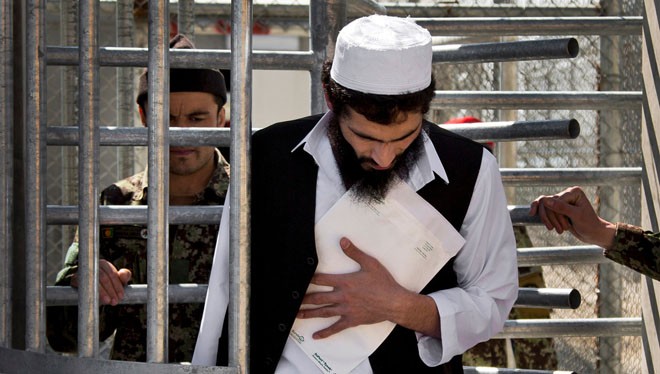 Prime Minister Nawaz Sharif has always been vocal against illegal and lethal drone strikes on Pakistani territory, but he must remember that drone strikes are not the only aspect of the United States’ misguided counter-terrorism policy to affect Pakistani citizens. The United States is currently holding over 34 Pakistani citizens in Bagram Prison in Afghanistan, without charge, trial or access to a lawyer.

The US authorities handed over six Pakistani prisoners to Pakistan on November 16, 2013 after non-profit lawyers’ firm Justice Project Pakistan (JPP) fought the case in Lahore High Court. Justice Khalid Mehmood Khan had clearly directed the Pakistan authorities in October 2012 to negotiate their release as there was nothing against these prisoners -- no charges, no trial.

The handed over detainees included 19-year-old Hamidullah Khan, who belongs to Waziristan. But he and his family have been living in Karachi for greater economic opportunities. Hamidullah has always been an excellent student and dreamt of becoming a doctor. In July 2008, during the summer holidays, his father sent him to his family home in Wazirisitan to collect their belongings. The family had learned of an impending military operation in the area and wanted to salvage their belongings. After a few weeks of traveling and having collected the family belongings, Hamidullah called his parents to say he was coming home. That is the last they heard of him. He was 14 when he disappeared.

If the United States leaves Afghanistan in 2014, the Pakistani detainees at Bagram Prison will be handed over to Afghan authorities notorious for the horrific torture they inflict on detainees.

A year later, his family discovered the US government was detaining him in Bagram, Afghanistan. His family believes that he was sold to the US soldiers across the border in return for a hefty bounty. How else could one explain that a child of fourteen, an excellent student, whose dream was to become a doctor, ended up in the black hole that is Bagram Prison?

Though the Pakistani government has also been aware of other detainees’ plight, it has failed to take genuine steps to repatriate its citizens.

It was only in response to litigation initiated by Justice Project Pakistan and the bold efforts of Justice Khalid Mehmood Khan of the Lahore High Court that these detainees begin to see a glimmer of hope.

In January 2012, Justice Khan rightly held that Hamidullah and five other detainees were innocent of any wrongdoing. He also said that even if they were guilty, it is the responsibility of the Pakistani government to ensure they are provided with legal representation and that they have their day in court. Only after ordered by Justice Khan, the Pakistani government initiated negotiations with the US government to seek the return of its citizens.

On October 16, 2012, the Pakistani government claimed in court that Hamidullah and five other detainees would be returning home but it took more than a year to materialise. Hamidullah’s mother kept fasting for long five years for his release and finally she saw him in Central Jail Peshawar which become possible after the LHC ordered the authorities to arrange meeting of the handed over detainees with their relatives.

Otherwise, the Pakistani authorities were trying to hide the fact that US authorities had handed them over six Pakistani prisoners. It became possible when lawyers from JPP informed the court on November 21, 2013 that the six prisoners landed in Islamabad on November 16, 2013.

The standing council of Pakistan Foreign Ministry expressed his ignorance about the fact, but on direction of the court he submitted a positive written report on next hearing.

There are still 34 more Pakistanis detained in Bagram Prison waiting for the Pakistani government’s help for release for the past 12 years. By not pressing the US government to repatriate those at Bagram Prison, it has destroyed their lives as well as those of their families in Pakistan.

Time is running short for the Pakistani government to redeem itself. It seems increasingly likely that the United States will leave only a small amount of troops in Afghanistan after 2014, certainly not enough to man Bagram Prison. If so, the Pakistani detainees at Bagram Prison will be handed over to Afghan authorities notorious for the horrific torture they inflict on detainees.

The Pakistani government has the legal and moral high-ground to demand the unconditional return of all its citizens detained illegally in Bagram Prison. It must hold negotiations with the US authorities at the highest level and sign a repatriation agreement applicable to present and future detainees. The agreement must guarantee Pakistani citizens will be repatriated in full respect of their internationally and domestically protected human rights.