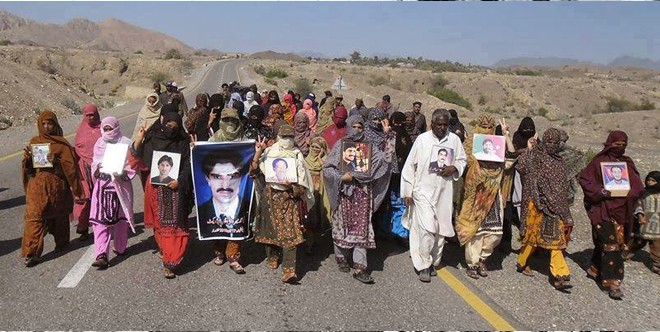 The irony of Nawaz Sharif’s insistence upon "giving peace a chance" by deciding to open negotiations with the Taliban will not be lost upon those who are cognizant that 44 per cent of Pakistan’s landmass -- Balochistan -- has been ravaged by war for years on end. A war that shows no signs of abating, that nobody talks about "making peace" with.

Not once have Baloch resistance groups been invited to negotiate. Why?

For our dollar-driven generals, indulgent bureaucrats, and spineless politicians, it is clearly in the ‘national interest’ to make peace with the Taliban and other right-wing religious militants, who are the self-proclaimed killers of ordinary people in virtually every part of the country every day. When it comes to the Baloch, however, the formula for peace is quite different -- be with us, or you will cease to be.

It is notable that the military operation currently underway in Panjgur, Khuzdar and Mastung districts of Balochistan began in the aftermath of the attack on Hazara Shia pilgrims in Mastung; the responsibility of which was claimed by Lashkar-e-Jhangvi (LeJ). Yet, the military operations are being conducted in districts suspected of being strongholds of the Baloch national movement rather than targeting the networks of Lashkar-e-Jhangvi or other militant-sectarian outfits. Baloch men, women, children; anyone suspected of sympathising with their brethren in the hills is liable for interrogation, torture of unspeakable proportions, and even death, as the discovery of decomposed Baloch bodies dumped in mass graves in Khuzdar has recently shown. The FC spokesperson proudly claimed to have killed a "known rebel affiliated with the Baloch Liberation Front" amongst the five ‘suspects’ who were killed in the Panjgur operation last week.

The military operations are being conducted in districts suspected of being strongholds of the Baloch national movement rather than targeting the networks of Lashkar-e-Jhangvi or militant-sectarian outfits.

This is the real face of the war on terror.

The state’s ‘peace-making’ strategy in Balochistan is two-pronged: the carrot-and-stick is combined with divide-and-rule to bring the Baloch resistance to its knees.

The carrot-and-stick strategy is manifested in the offer of political office (read: patronage rights) to one section of Baloch nationalists, namely the pro-federation National Party whose head Dr Abdul Malik Baloch is currently chief minister of Balochistan. Simultaneously, the military has stepped up its use of the stick against those who now have nothing left to lose -- those who have lost their homes, lands, livelihoods, loved ones -- everything, to the state’s glorious pursuit of the ‘national interest’.

This carrot-and-stick strategy has effectively cemented the division between the pro-federation and pro-independence strands of the Baloch movement, and has made the state’s job of crushing the movement easier now that the ‘face’ of the Balochistan government is from amongst the nationalists themselves. Having Abdul Malik as the current chief minister, who is ostensibly supervising all military operations underway in Balochistan, is important for the state’s ability to manufacture consent outside of Balochistan.

Inside Balochistan, they need not worry, as the military reigns supreme.

There is nobody but the "brave jawans" and the destitute, war-ravaged Baloch people, many of whom are learning of the existence of the entity called ‘Pakistan’ through the war itself. As long as the state has control over who and what leaves the black box of Balochistan, it is unconcerned with the perennial hatred it has spawned by ripping to shreds of entire generations of Baloch families, their homes, memories, their life-rhythms.

What is also noticeable about the pattern of the military operations in Balochistan is the way in which there is a clearly orchestrated attempt to pit the Pashtun and Baloch against each other, and in recent months, to pit the Hazara and Baloch against each other. The LeJ and other religious militant groups are given Baloch-dominated districts as their stomping grounds, and then gory attacks such as the Mastung suicide attack are used as pretexts to hunt Baloch guerrillas and their sympathisers, and to strike fear into the hearts of ordinary Baloch people. The insinuation that it is the Baloch (and not state-sponsored death squads) who are responsible for the deaths of Hazara pilgrims and abductions-for-ransom of Pashtun traders, and the subsequent calls for ‘action’ (read: military action) from these communities against the ‘perpetrators’ is a dangerous trend engendered by the divide-and-rule policy.

Yet, the state has been defeated again. The long march of the relatives of Baloch missing persons, and their determination to continue their 1400-kilometre march despite ugly threats, harassment and physical and psychological intimidation has put this mighty coercive state apparatus to shame. These brave people -- led by an old man who lost his son to state terror, and a young woman determined to live the life that was snatched from her brother -- remind us that the human spirit and all the vitality it brings with it, cannot be crushed by the cowardly violence of this armoured, greed-driven state.

It is not enough, however, to hold only the military and intelligence agencies responsible for the present state of affairs in Balochistan. As has happened so many times in the past, the current democratic government has chosen yet again to betray the people by passing the Pakistan Protection Ordinance (PPO), a piece of legislation being remarked upon for its similarity to the Rowlatt Act of 1919 which was made by the colonial British government for controlling unrest in India during World War One. The PPO effectively provides legal cover to enforced disappearances by removing the legal obligation to produce detainees before a court of law within 48 hours of arrest, and extends this period to 90 days. That a democratic government has chosen to pass such a piece of anti-people legislation in the present conditions of rampant state terrorism and ethnic cleansing in Balochistan, says a lot about the farcical democracy we live under.

It is the Pakistani people that need protection, not the state of Pakistan.

Even more unfortunate is the fact that people in this country need to be protected from the state, rather than by the state. The Baloch example speaks volumes in this respect.

It would be good for the state -- both its civil and military arms -- to remember that just as it cannot eliminate poverty by eliminating the poor, so it cannot solve the Baloch problem by conducting ethnic cleansing of the Baloch people. If anything, the democratically-elected government and political forces of the country need to recognise that it is for their own survival that they must confront the enemy within, else there will be no roost left to rule.