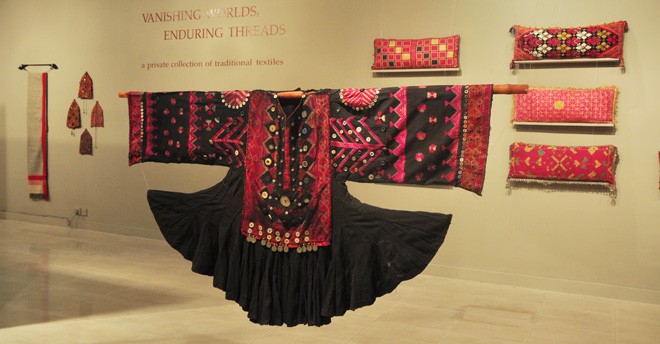 I remember, as a child I used to be tirelessly fascinated by my mother or grandmother’s shawls. Draping them like cloaks, I ran around the house, imagining myself to be a little king. Looking back I wonder, what exactly it was that fascinated me. Was it the colour or the patterns or simply my desire to be engulfed in rich textiles?

Over the years it is one particular shawl of my mother’s that has stuck with me. A rusty, orange shawl, heavy with zigzag patterns that are silvery-gold; I am told it is phulkari from Kashmir and belonged to my great grandmother. Hence, encountering a similar one in an exhibition caused particular interest. Vanishing Worlds, Enduring Threads brought together a private collection of traditional textiles from Pakistan, curated by Aasim Akhtar at the National College of Arts, Rawalpindi campus.

The show shed light on indigenous craft bringing attention to traditions that are slowly dying out. Beautifully presented, the vermilion, gold and yellow swallow you. It is upon familiarisation that one realises that in fact the motifs around you are a language, each potentially telling a unique story, waiting to be unlocked.

What is especially interesting about Pakistan’s historical traditions is that they predate its age. In many ways, those growing up here take their own history for granted and organic evolution goes almost always unnoticed.

Akhtar introducing the exhibition mentions, "Textiles embroidered and appliqued by women at home were originally not made for sale, but many were made as dowry for the daughters, and by brides as proof of skill for the groom’s family".

Passing on of bespoke items through generations, like in the case of my mother, was common. A paper read at the recent Trust for History, Art and Architecture in Pakistan Conference in Lahore by Jasleen Dhamija also addressed the original context of textiles in this region, specifically Punjab. Dhamija, mostly addressed Sikh traditions of Phulkari and Bagh and talks about how these embroidered patterns were interwoven into the lives of women and were very much part of their rites of passage.

Phulkari literally means ‘flower working’ and Bagh, ‘garden’. Phulkari, generally was restricted to embroidered shawls and headscarves made for everyday use, whereas Bagh were garments that covered the entire body, made for auspicious and ceremonial occasions.

Dhamija points out that the major difference between these traditions being practiced in East Punjab and West Punjab, now Pakistan was, "the entire surface of the Bagh was completely covered and the patterns were created by the directional movement of the stitches, which also created the textured effect and even light and shade effect".

Due to the fact, our history is shared and not limited to relatively recent geographical parameters; it is almost essential to form these comparisons.

What is particularly interesting about Vanishing Worlds, Enduring Threads though is that it goes beyond Punjab, and looks at textiles across Pakistan, becoming an introduction to this ancient visual vocabulary as well as forming many inter-regional links. Akhtar referring to archaeological artefacts from Mohenjodaro, such as the bronze needle and spindle, suggests this region was one of the first to process perennial wild cotton from its fibre stage to woven cloth and then to dyeing. Through this retrospect Akhtar draws attention to the various identities our textiles have to offer and the diversity of techniques found locally. The show includes the abhochnai from Sanghar or cholis of Badin in Sindh, the indigo-dyed with zardozi work done in Haripur, Hazara or phulkari from Abbottabad to mention a few.

"It is true that in recent years, the textile industry has expanded. This has resulted in the creation of many more opportunities for our local craftsmen but has also resulted in damage to traditional vocabulary" says Akhtar, who describes the mutations as "violent".

The confrontation of my mother’s shawl as an endangered craft was disturbing. Owning a piece of history and having taken it for granted leaves guilt. Growing interest in the textile industry makes this show even more relevant, where it encourages the viewers to take pride in their own history as well as work towards understanding these traditions. In this way, it can be seen as a service to the further development of the industry, especially for current students.

While it is impossible for anyone to cover all traditional Pakistani textiles in one go, this exhibition offered the viewer an immersive experience exposing us to the specific usage of textiles in the region. The cultural history and these traditions are a minefield of knowledge waiting to be unpacked. As well as the craft, Sufi poetry and literature such as Bahu reference embroidery, indicating how significant the symbolic and spiritual value of these woven pieces has been at different times. In this way Vanishing Worlds, Enduring Threads also celebrates the journey of these interlaced fibres.