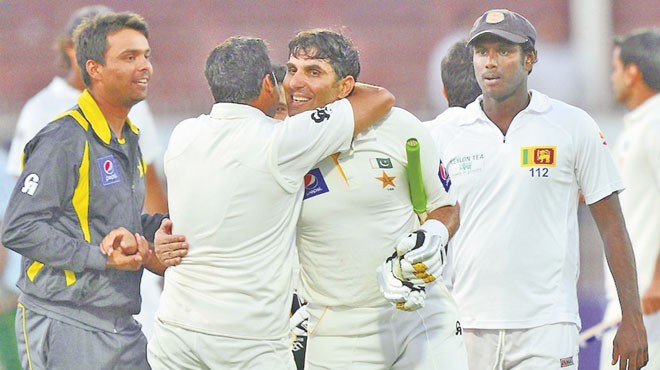 Pakistan’s success in the third Test against Sri Lanka in Sharjah came as a very pleasant surprise to the cricket buffs in the country. Pakistan’s captain Misbah-ul-Haq rated this as the biggest Test win, bigger than the 3-0 result against England at the same venue about two years ago.

Not only did Pakistan have to score more than 300 in their fourth innings, they also had to go fast towards the target -- they had just 59 overs. They achieved their target in 57.3, at a run rate of 5.25. This is the highest run rate for a fourth-innings total of more than 205.

The Pak-Sri Lanka Test series was the last assignment of coach Dav Whatmore and the team ensured that they gave him the perfect send-off.

Whatmore took over as coach in March 2012 from Mohsin Khan. Under his coaching Pakistan failed to win any Test series, but they clinched Asia Cup and defeated India, South Africa and Sri Lanka in ODI series.

"I am absolutely delighted. It’s a satisfying win and a perfect gift the boys have given me on my departure," said Whatmore. He rated Sharjah Test win one of the highlights of his coaching career.

It was also coach Graham Ford’s last assignment with Sri Lanka. He came aboard with Sri Lanka at a time of upheaval, in which both the previous coach and the captain were sacked.

Ford departs for a three-year term with Surrey, which he begins in February. He cited family reasons for his decision not to have a second term with Sri Lanka, despite the board’s request that he stay.

Pakistan needed 302 runs from 59 overs and 195 from the 35 overs of the final session. Azhar Ali’s confident 103 off 137, Sarfraz Ahmed’s brisk 48 off 46 balls and Misbah-ul-Haq’s solid 68 not out made the chase possible for Pakistan despite bad light conditions.

At the end of the Test, it emerged that Sri Lanka had batted 273.4 overs, while Pakistan took only 166.4 overs to score the required runs.

The positive sign of Pakistan batting was that they did not go on the defensive despite losing three early wickets. Misbah took a bold decision and promoted wicket-keeper batsman Sarfraz Ahmed in the batting order. The youngster proved his decision correct.

Both captains led their teams from the front. Sri Lankan skipper Angelo Mathews was the highest scorer of the Test series with 412 runs at an average of 103. He scored one century and two fifties.

Misbah was Pakistan’s top scorer with 364 runs, averaging 91. He hit one century and three half-centuries.