"The year of Manto isn’t coming to an end" 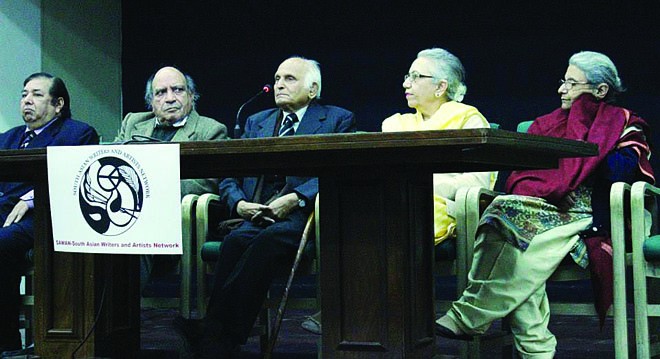 "Last year was the year of Manto. That year has ended but the year of Manto continues," said Intezar Hussain at an event organised in commemoration of Saadat Hasan Manto’s 59th death anniversary, by South Asian Writers and Artists Network, at HRCP recently.

"The books keep coming. And, this should be enough for you to guess the celebrity of this writer," Hussain continued. "Death is also a test for a writer. Manto’s stature has only improved with time."

He added that Manto in his lifetime didn’t compromise on his views and, therefore, "I consider him as the greatest "baaghi" (rebel) in Urdu literature.

"The tradition of our short story is young," he said. "Unlike ghazal, our short story tradition is very new. We borrowed the novel and the short story from the west. Despite this, we had originality and big names came about. In poetry, we had Ghalib, Iqbal and, in modern times, Faiz. In the last two years, we have understood that Manto was at par with them, a man with just as grand an image."

Hussain said that Manto greatly admired Ghalib, though his literary bond was with Nazeer Akbarabadi -- and Manto himself didn’t realise this.

Last year was Manto’s 100th birthday and the whole year was marked by celebrations, book publications and magazine articles. Yet, most focused on the theme of how Manto was a rebel writer who showed the Pakistani society a mirror for the first time after partition and was, therefore, censored or ignored by the society/state. Many sited the fact how Manto is not available in official school/college curriculum. The second theme is Manto’s life itself, which was no less dramatic than his works. Most people see him as a victim of this vicious society, the state who sued him, the publishers who exploited him and the readers who didn’t realise his potential when he was still alive.

This event was marred by the same themes. Most people talked about Manto’s stand on immorality in society. And, since culture has indeed taken a sinister turn after Zia-ul-Haq, terrorism and 9/11, they felt Manto’s case had strengthened.

Most people see Manto as a victim of this vicious society, the state who sued him, the publishers who exploited him and the readers who didn’t realise his potential when he was still alive.

The others had some heart-wrenching tales of his suffering to recount. For example, the curator of the ceremony Saeed Ahmed mentioned how Ahmed Nadeem Qasmi had not been able to bear how swiftly Manto’s health was failing. Once when he requested Manto to drink less, Manto was furious as usual.

Saeed Ahmed went on to narrate how the state had killed Manto.

Renowned painter Ajaz Anwar was also present on the occasion. He used the platform to raise his voice against the deteriorating condition of the Lakshmi Mansion where Manto used to reside. "The Hall Road Traders Association wants to remove the building but the case is still pending in the court," he said, adding that he had recently been to the mansion with the Indian writer Pran Nevile. The latter, now 92, went in a shock on seeing the condition of the building he spent his childhood in and Anwar thought it best that he didn’t stay there too long.

I.A. Rehman also took the stage. "Manto’s work was far-sighted and had a visionary quality," he said. "When the Americans first came to Pakistan we wrote editorials against it and protested that it will compromise our freedom and sovereignty. But Manto said that your state’s face will change. He was hinting at our Ziaisation, which some people call Islamisation as well. This I have not seen in anyone else’s work, other than one story by Ghulam Abbas. He telling us where our deeds will take us. At that time I didn’t know this."

Manto’s daughter Nighat Patel and Nuzhat Manto were also present on the occasion. They were too shy to sit on the stage but when Intizaar Hussain and I.A.Rahman appealed, they agreed. They are graceful old ladies now, sitting with their elbows on the table and listening to the speakers intently. Painter Ajaz Anwar presented him with an original print of his painting of Lakshmi Mansion.

Everyone insisted that Manto’s sisters also say a few words. "As children we were unaware of the fact that we were living with such a great man," said Nighat Manto. "We were very young when he died. But during his life, he had as many opponents as admirers. He was reading an essay on Chiraag Hassan Hasrat’s death anniversary. Half the people were trying to stop him from reading it because they said it was against Hasrat. Our German friend came to Pakistan to make a movie on him and PTV tried to stop her, saying why don’t you try some other luminary, instead of Manto?"

"The year of Manto isn’t coming to an end"