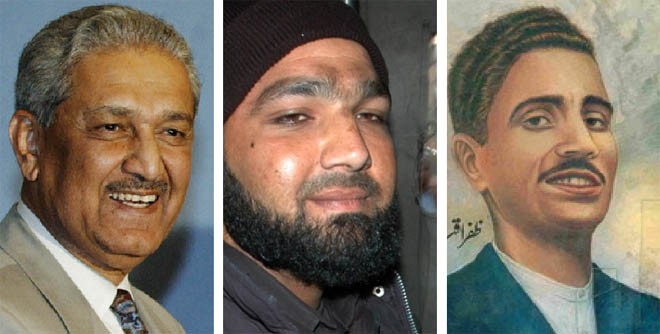 All nation states imagine mythical heroes. Mostly, they imagine them in relation to enemies. So did the newly created state of Pakistan. Only it imagined or created those heroes as well as enemies at its own peril. Instead of helping it build a strong nation, its people became perpetually insecure; despite its illustrious list of heroes, that is.

Talking of heroes, politics and religion have converged and diverged in strange ways in this country. It is easy to find the answer in the history of its creation because that is where the roots of this tension between religion and politics lie. Some see the creation of Pakistan as a logical conclusion of the communal politics pursued by the Muslim League leadership. Others think there wasn’t anything communal about the demand and hint at it seeking a ‘Muslim’ rather than ‘Islamic’ state.

You could argue either way. The fact is that, despite being a predominantly Muslim state, there was an assertion of religious identity from day one. This has been interpreted as both an expression of its narcissism about the antecedent ‘superior’ Muslim civilisation and a sense of loss of Muslim control over the majority in the Indian empire.

One isn’t sure when and how the project Mohammad bin Qasim was first launched but Qasim it was who is said to have laid the foundation stone of the building called Pakistan. At least, that is what children in this country learn from the word go.

With Qasim, the distortion of history project started and did not stop. Somebody did a nice job of picking up the most celebrated heroes: here goes the list -- Mohammad bin Qasim, Mahmood Ghaznavi, Aurangzeb, Ilam Din, AQ Khan and Mumtaz Qadri. The common thread is of course the assertion of Muslim-ness and latent or actual brutality.

In the rewriting history project, whatever was not Muslim was ignored or rejected. Instead of celebrating Bhagat Singh who was a part of the collective anti-colonial struggle and belonged to this soil, he is shunned for being a Sikh which makes it quite interesting because Singh claimed to be an atheist.

One isn’t sure when and how the project Mohammad bin Qasim was first launched but Qasim it was who is said to have laid the foundation stone of the building called Pakistan. At least, that is what children in this country learn from the word go.

To get back to the period soon after 1947, the role of Islam assumed an importance in the political debate in an emphatic way. Prior to that, almost entire Muslim League leadership had a secular mindset and was trained in western political ethos or western system. It was in the context of the partition-related bloodbath as well as what this leadership stood for that Jinnah’s August 11 speech was made. Jamaat-e-Islami and Jamiat Ulema-e- Hind were both opposed to the partition of subcontinent. But after the creation of Pakistan Jamaat-e-Islami under Maulana Maududi became active in seeking an Islamic constitution for an Islamic state.

If somebody’s interested in knowing where the blueprint for the March 1949 Objectives Resolution presented by then Prime Minister Liaquat Ali Khan, came from, it came from the February 1948 Maulana Maududi address in Law College, Lahore. In the address, he demanded the Constitutional Assembly to unequivocally declare that "the sovereignty of the state of Pakistan vests in God Almighty and that the government of Pakistan shall be only an agent to execute the Sovereign’s Will", that "the Islamic Shariah shall form the inviolable basic code for all legislation in Pakistan" and "all existing or future legislation which may contravene, whether in letter or in spirit, the Islamic Shariah shall be null and void and be considered ultra vires of the constitution…"

Expectedly, the non-Muslim members of the Constituent Assembly expressed strong reservations about the Objectives Resolution and said that it was against Jinnah’s vision. That Liaquat Ali Khan had conceded all political space to regressive religious forces was confirmed when he said during the debate on the issue that it was half of the mission of Muslim League "to convert Pakistan into a laboratory where we could experiment upon the principles of Islam to enable us to make a contribution to the peace and progress of mankind".

The authors of the Munir Inquiry Report (1954) said in so many words that Pakistan cannot pretend to be a democracy in the presence of Objectives Resolution, that it is against the spirit of Quaid’s vision for the country and that he would not have approved of it if he was alive.

Appeasement became a policy document for the political leaders that came after Liaquat Ali Khan. Objectives Resolution strengthened the influence of the so-called Ulema, which is why they made Ahmadis their first target demanding them to be declared a minority. It was Zulfikar Ali Bhutto who finally accepted their demand.

Mumtaz Qadri is not an aberration; he is the legitimate leader in the state of Pakistan.