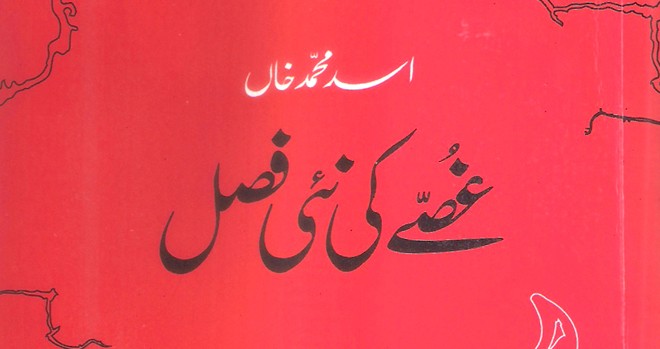 In a story Ghussay Ki Nai Fasl, Asad Muhammad Khan tells us about a religious sect called ‘Mardoozy’. The followers of the sect believe that one can get rid of the negative emotions, if expressed ceremoniously, by making a conscious effort. They believe it would make it possible for them to achieve a perfect state of spiritual freedom.

"No such descriptions are available in history. You may call it my fantasy," says a chuckling Asad Muhammad Khan when asked about the reality of the sect. "Two words of Urdu language: Mardood and Zindeeq, almost with the same meaning ‘of condemned one’ are joined to coin the term," he says.

The followers of the sect gather every night and groan, growl and cry out at each other, in order to enable them to spend the next day in a quiet state of ‘completion’. In a symbolic way, Khan tries to present a solution to extreme intolerance prevalent in the society. Is it a way out? This, he answers in other stories in the book that there is no way out. We have to harvest, what we have sowed.

In Circus Ki Saada Si Kahani, Khan dramatises a scene of the complex environment of a circus and the intricacies of its staff’s personal relationships. The characters are confused, hopeless and stuck in a situation, which they gradually realise there is no way out of.

Similarly, in another story Waqaea Nigaar the desperate political situation across Indo-Pak border is depicted. A character of the story Dr Doabay warns the protagonist, anxious to go back to his homeland, of the same despairing conditions and the ill-fate waiting for him even in his own country. Again there is no way out.

Born in Bhopal, India, Asad Muhammad Khan shifted to Pakistan at the age of 17, first to Lahore, and then to Karachi for permanent abode. He worked in various disciplines drama, poetry, translation, commercial fiction, and of course short story and proved his mettle. He made a late entry in fiction but it was impressive from the beginning. His very first story Masauday ki Maryam is considered one of his best pieces till date. He has five collections of short stories to his credit, along with a number of television plays, songs and translations from international literature.

A great admirer of Sher Shah Suri, whom he studied in detail while researching for one of his teleplay scripts, he was fascinated by the administrative qualities of the man and accomplishments during his rule. That era he depicted in many of his stories.

Asad Muhammad Khan is deeply in love with life. In his stories, one finds colourful and detailed descriptions, variety of characters all signalling to this aspect. His passion seems to depict life in all its diverse colours and shades. With powerful narratives, vigilant details, a vast variety of unique and colourful characters and a vibrant locale filled with thrill of life, Asad Muhammad Khan constructs a colourful fictional world of his own.

The uniqueness of his characters, dazzling narrative, a language blended with a variety of dialects, command over the art of storytelling and sharp dramatic sense, has earned him a high status in the contemporary Urdu fiction. Hidda Ustaad, Laji wala Javed, Waqaea Nigaar, Sampoorna, Ring Master, Deewan Ji and a number of others from red light areas, suburbs, and the history of Rohailas, are some of the memorable characters that he has introduced to Urdu readers through his creative genius.

Considering the necessity of a pliable language, to afford an accommodation of divergent modes of language, Asad Muhammad Khan uses an experimental language blended with various accents and vocabulary of characters, hailing from different social and cultural backgrounds. Being aware of the fact that a puritan approach towards language can be a hindrance to construct a divergent fictional world, he blends it successfully with regional terminology and nomenclature.

Though it is not proper to ask any fiction writer to suggest us a way out of our problem, as they are not reformers, but as readers, we do expect some guidance by a writer of such a status. The publisher also needs to be commended for the best outlay, error-free text, and of course, an affordable price.