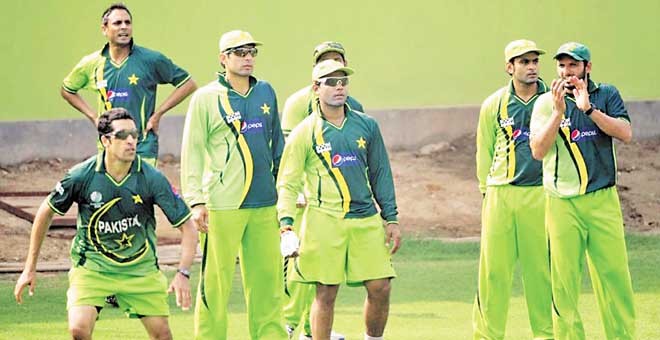 I wonder what it is they see in Rahat Ali? He takes the odd wicket after every 50 overs or so. Two spells of five wickets, one where South Africa were hitting out for a declaration and the other against lowly Zimbabwe batsmen are absolutely no reason to play him. His monotonous, outside the off-stump bowling in the first Test was one of the factors that allowed the Sri Lankan batsmen to pass time, something that they desperately needed to. Pakistan already have Junaid Khan as a left-arm option and even though Bilawal Bhatti is generating good pace we still need a tallish right-armer to make the new ball talk.

The way Pakistan have been constantly playing the third bowler who comes up with nothing, whether Rahat or other, since the last couple of years, points to the conspiracy theory that they’re saving that place for Mohammad Amir when he returns. PCB has been, and is already, optimistic that he will play earlier than he is supposed to. Not that Amir has any par even in the current lot, but then we don’t know whether he will be that lethal a bowler when he returns after playing no competitive cricket at any level over the past few years.

But the way we come up with fast bowlers (when the selectors want to) means that we could have found someone to take his place rather than playing ordinary ones; or oscillating to and from the XI those who have a potential to deliver once they settle down. Yes, a chance was not taken behind the stumps but if a bowler needs a greenish pitch to come up with one opportunity that’s not good enough.

Everyone knows where I stand with Mohammad Hafeez, but I would like to add here that the file is full of evidence of his uselessness when the going is even 20 percent tough. He should never have made it into even the ODI squad this time after his persistent failure in South Africa. That so much is being made that he should not have returned to the Test squad because of his three hundreds in the ODI’s are playing down the power of ‘feeling good’ against a bowling attack.

We have read since cricket began that it is played in the mind more than it is on the field. Yes, the attack is not among the best in the world and the Abu Dhabi pitch is not different than what you will find in Gaddafi or National Stadium, but bowlers are always vary of the batsman who believes he can play them comfortably and who have got their measure. There was logic in going with the flow. And with Saeed Ajmal going into the expected fatigue mode considering how much he has been played, his off spin is more than useful.

There has been criticism of Pakistan’s approach on the last day of the first Test, but a batting line-up that can fold at a drop of a hat, which has the most impotent tail in the world and where their half batsman Adnan Akmal would not have batted, going for a win would have been fancy thinking. Not for nothing had Angelo Mathews declared when he did. No captain will declare on the last day until he has a 9 out of 10 chance of not losing. Sure a team with Shikhar Dhawan, Chris Gayle, AB de Villiers and Virat Kohli might have gone for it. But batsmen with strike rates of 70 odd in ODIs could not have been expected to perform the magic.

Not that I am defending the negative approach as I feel a match is there to be won not drawn. But we have to think realistically that Misbah would have been a fool to go for a 300-plus target with the batting average Pakistan has over the past few years and the frailness of confidence the first six are carrying with them. If the ICC wants some excitement in difficult chases they will have to come up with additional points for every 50 runs scored in the fourth innings with bonus points if the run rate is more than at least 3 per over in such a situation. This will tempt the teams when the target may just be gettable. There’s no such thing as a free chase.

On a final note I am disappointed at the animosity there is in some quarters against Sarfraz Ahmed, to the extent that they call for the Akmals every time the bloodline behind the wicket is interrupted. Kamran Akmal has disappointed with the gloves on every comeback and the other reason he has been called for, his batting, is not to be seen recently. Adnan Akmal has missed half to full opportunities at an average of per innings. Umar Akmal is a non starter really, given gloves to get him back in the ODIs.

Yet, it takes one missed opportunity by Sarfraz for the knives to be out. The Rahats and the Hafeezs are egged on match after match but one early dismissal (when the specialist batsmen barring Khurram) and one missed chance is as if we just lost the match because of that.

No one mentions that no other catch came to him before 80 overs on a bowler friendly pitch on which bowlers of equal if not lesser mettle had whisked away on the trot the last eight Pakistanis. Or that once again he got to bat on a seaming pitch after playing his only other Tests in Australia and South Africa. I don’t hear mentions of his lone, fighting innings against the world’s best bowlers on a South Africa pitch.

There has been grudging appreciation in fact for Khurram after his return to Test cricket with 146 against Steyn and Morkel. He had been considered a flop following his 73 on a Hobart pitch facing Lee and Co. who had decimated the Pakistani batting that included Mohammad Yousuf, Salman Butt, Shoaib Malik and Umar Akmal. Umar Amin, to cite just one example, is constantly sympathised with for consistently failing. Prejudice is sadly not restricted to selection only.