Prisoner of his circumstance 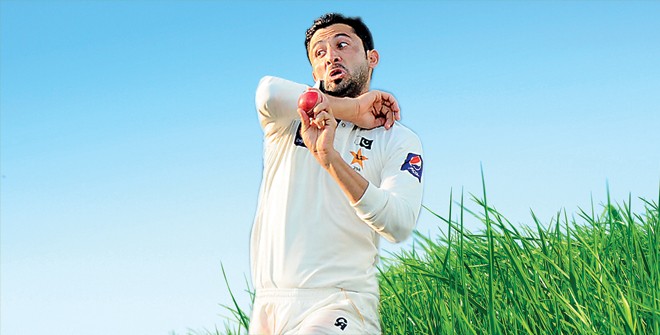 So Junaid Khan’s 50th wicket did come in his 14th Test. It was fitting that he took as many wickets as the man he has been in the shadow of. Not Wasim Akram, but Mohammad Amir. Because it is due to Amir that he is under-appreciated.

And under-appreciated is the word you would use for someone who has, in the space of 24 months, carved his name into the second tier of fast bowling (behind Dale Steyn), and is quite clearly the best young quick in the world, while continuing to be rotated in the team and not beloved by the fans. Perhaps it’s because when he was introduced to the general Pakistani public in 2011, it was as a replacement for Amir, a poor man’s Amir even. By contrast Amir’s rise came during the absences of Asif and Akhtar, and then one good summer allowed him to get what he deserved. And first impressions are difficult to remove -- Amir was the next big thing, Junaid was the next best thing.

After 14 Tests Junaid has 50 wickets, one less than Amir, and five more than Wasim. His average, of 27, sandwiches those of Wasim and Amir neatly. And he has done this despite playing 10 of his 14 Tests in Asia, compared to just the three for Amir. Meanwhile his ODI average is already better than Wasim ended up with -- so it’s fair to say that he hasn’t exactly underperformed in that format. Considering the circumstances and the conditions, it would be fair to say Junaid has done more in as much playing time as Amir did.

What Junaid hasn’t had have been Amir’s moments or continuity. Amir played his 14 Test in the space of just 14 months. For Junaid that journey has taken twice the time. He has, obviously, struggled with two injury layoffs that have hurt his continuity. Being present in the fan’s eyes is necessary to rise to stardom it seems. Irfan’s presence, and Gul’s absence, over the past year shows how much just consistently good performances can alter opinions. But more than just the continuity, it’s been Junaid’s lack of moments that have hurt him. Amir had that over to Dilshan, the wicket of Tendulkar at Champions Trophy and a horde of wickets in an English summer in primetime. The closest Junaid has come has been the tour to India, which actually did alter perception, even if it they were temporary. The career of Shoaib Akhtar is proof that having a multitude of moments, even in an injury stricken career, can bring you adulation and fame.

And yet all this only further illustrates how good Junaid is. Sure he hasn’t had the ‘moments’ that Amir did -- but that’s because the majority of his cricket has been played in Asia. Junaid doesn’t have the extravagant swing that came to Amir, especially in England, but his usage of lengths and the crease is far better than Amir had. The closest equivalent that Junaid would find right now in international cricket might be Peter Siddle, another supremely underrated bowler who works both as a work-horse and as a wicket-taker. Junaid’s Test career has been defined not by early morning demolitions but by bowling through the day on dust bowls against the Lankans. He is a prisoner of his circumstance.

And this is why when Shoaib Akhtar, being typically outlandish, says that Junaid is a hard working bowler but not a wicket taking one it is taken as a valid opinion. Junaid doesn’t have the obvious charisma that is associated with the Pakistani fast bowler. His run up just doesn’t look Pakistan -- our greats were defined by flexibility and apparent beauty; something that Amir had. His run up, from the bunny hop to final twang of the arm seems to require effort. Amir, much like Waqar and Imran, seemed to glide to the crease, as if running on top of the blades of grass without ever touching the ground beneath. Wasim’s was blur of tippy tappy steps, feet moving faster than the eye could register, until the arm too followed that definition. Junaid seems to require effort, but not the outlandish bull-in-a-china shop that Shoaib showed, but a more plebian one. Junaid looks almost South African or Australian. Until he releases the ball that is, when he reverse swings it like a Pakistani fast bowler is supposed to.

I began writing this trying to remove Junaid’s career thus far from the two lefties that preceded him. But the truth is that it’s nigh on impossible to separate him from those two. Every Pakistan left arm quick for the next half a century will be compared with Wasim, no matter how unfair that is. The first benchmark that Junaid has to compete with is that of the greatest left armer ever. The second benchmark that he has to compete with is an imaginary career whose end was far more glorious than its beginning. Lest we forget, Amir averaged over 40 after eight Tests before a summer in England. The perception of him will always be from that summer, of him swinging the Dukes ball at will and regularly damaging a top order that would lead England to the number 1 rankings within 12 months of his ban. Junaid will struggle to keep up with Wasim but he just might get close; but no matter what he does he will never be able to challenge Amir -- imagination, like Father Time, is impossible to compete with.

Prisoner of his circumstance