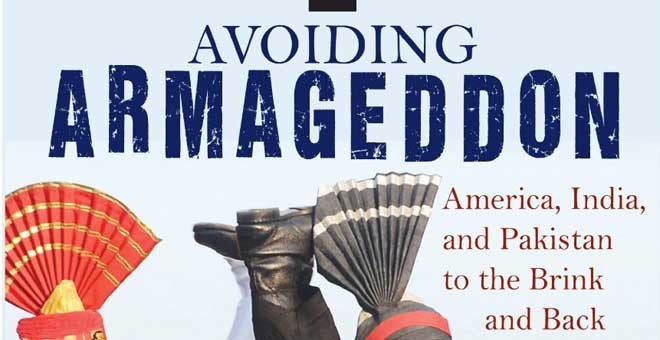 Bruce Riedel’s Avoiding Armageddon: America, India and Pakistan to the Brink and Back, with critical comments on the triangular relationship between India, Pakistan and the US, met all the expectations of avid readers of history and international relations, though there is some room for factual corrections.

In this book, Bruce Riedel, a long time CIA official and present day director of the Brookings Institution Intelligence Project, looks at the ways and means by which terrorist networks like al Qaeda, the TTP, Lashkar-e-Tayyiba (LeT), and certain other mushroom terrorist parties are capable of defying regional and global democratic tendencies which, the theorists believed, inevitably lead to the volatile relationship between India and Pakistan and national security of the US.

As a terrorist regime, Riedel argues that parties like al Qaeda always take steps to weaken democratic trends in the region and make countries trouble each other resulting in a disturbance between states like India and Pakistan. However, in this process, countries like the US are the ultimate sufferers, who lose confidence and support of regional countries in their mega policy -- global war on terror. The author describes how the rivalry between India and Pakistan handicaps the US in dealing with the war on terror. Hence, he reviews the US diplomacy in South Asia critically, dissects crises in the region, and prospects for future crisis.

The book starts with a sympathetic chapter for India defining the Mumbai crisis of 26/11. Riedel on page 24 says: "The complex web of ties between al Qaeda, LeT and the Pakistani army are direct threat to American strategic interests beyond Mumbai itself." However, he does not give any details of such a network. The sacrifices given by the military and civilian population of Pakistan for containing terrorism must not be diminished by aligning Pakistan army with al Qaeda and other terrorist networks. Indeed Pakistan is a war-torn country that is direly in need of financial, economic, and military support rather than mud-slinging and defamation.

America’s biggest mistake in South Asia was to undermine civilian rule in Pakistan for decades. This resulted in a psyche which thought the US is using Pakistan rather than cultivating relations on equal level.

After defining Mumbai crisis, the author for some historical perspective, looks back at how today’s India, Pakistan, and America were born of a common parent, the British Empire. On page 36, Riedel, while giving reference of the 1857 War of Independence talks about capture of Mr ‘Zahar’. However, with a paragraph more, the reader understands it’s not Zahar. It’s Zafar [Bahadur Shah], who was sent into exile in Burma.

On page 27, the author says that ‘America, India and Pakistan are all products of the British empire… to which they also owe a common language’. One wonders which common language he is talking about -- English, Urdu or Hindi. All the three countries do not have anything in common as for as their language is concerned. Rather the Indo-Pak history says that the language was one of the reasons of the Partition in 1947.

After historical background of the three countries, Riedel focuses on the relationship among India, Pakistan and the US since 1947, examining how 12 American presidents engaged with India and Pakistan. His primary focus on their relationship aims at diplomacy, counterterrorism, and nuclearisation of South Asia and its effects. Every President in the White House tries to befriend both India and Pakistan. However, in the end, he would build an alliance with one. Truman and Eisenhower went for Pakistan while Kennedy, Johnson selected India for their respective friendship.

Similarly, during 1970s and 80s, Nixon and Ronald Reagon went for Pakistan while Ford and Carter befriended India. In fact, Americans wanted to build an alliance of states to contain communism and roll back its gains. In their view, democracies like India should recognize that the cold war was a conflict between good and evil and honour their moral obligation to choose good. But Riedel further says that Nehru and subsequent Indian leaders wanted to preserve Indian neutrality in the cold war. They wanted India to lead a third way, nonalignment, which would be created from the newly-decolonized countries of the world. It would be a powerful bloc between Moscow and Washington that would focus on further decolonization and economic growth.

The author also touches Pakistan’s domestic politics of the 1950s. He says that while Pakistan was keen to have west on its side, the East and West Pakistan were not harmonious with each other. Ayub Khan’s coup made no difference in the two wings relationship. This ultimately resulted in dismemberment of Pakistan.

The era of triangular relationship between India, Pakistan and the US during late 1970s is very particularly focused by the author. It was the era of change within and without. Carter was facing crisis in Tehran, while the Soviet forces were marching into Afghanistan. In India, the state of emergency was lifted by Indra Gandhi who announced elections. However, she lost and was replaced by PM Morarji Desai.

In Pakistan, General Zia, through a military coup, rose to power and replaced Zulfikar Ali Bhutto. In the circumstances, Carter’s priority was India. He wanted to balance the tilt of Nixon of 1971 towards Pakistan. This would have balanced the US approach towards South Asia in general.

President Carter visited India in 1978 but ignored Pakistan. However, the Indo-US honeymoon was short-lived. The hostage crisis of Tehran and the Soviet invasion of Afghanistan changed strategic look of the region. The US needed a confident to fight Cold War II in Afghanistan and Pakistan had an experience of it. Hence, with the replacement of Carter by Ronald Reagon, the Indo-US honeymoon was replaced by the Pak-US alliance.

The 1990s era was the era of the US negligence of Pakistan and importance to India. This produced a gap between the US and Pakistan policy makers. Hence, monsters like the Taliban and the al Qaeda were produced.

However, the 9/11 events brought Pakistan, India and the US again together on the same table. Still the rivalry between India and Pakistan is badly affecting the US objectives in the region. However, it’s due to the US ‘rental commodity approach’ that produced backlash in Pakistan. America’s biggest mistake in South Asia was to undermine civilian rule in Pakistan for decades by backing every military dictator in the country’s history. This resulted in a psyche which thought that the US is using Pakistan rather than cultivating relations on international level. Presidents from both parties of the US liked the Pakistani military generals. Thus anti-American feeling in Pakistan in the present era is understandable.

The book, with the exception of a few factual errors, emotional statements like linking al Qaeda with Pakistan army and numerous typos is worth reading for academicians, students of history, political science, and international relations, as well as for the strategists and policy makers of Pakistan, India and the US.