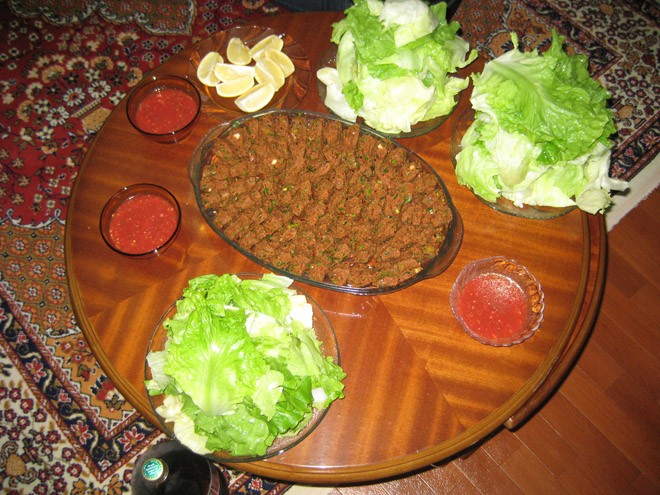 The food was laid out and everyone sat cross-legged on the floor around heaps of koftey, roti, and salad, with roughly a jug of salty lassi per person to wash it down. Sounds like standard Punjabi fare at lunch time? Only, it is authentic traditional Turkish food prepared by and for a group of Turkish friends getting together over dinner.

The similarities are misleading. Koftey is of course made of mince beef but it is uncooked meat. Iceberg lettuce is not meant as salad; more like wrapping material. And roti is paper thin disc of flour that too serves as mere wrapper. The entrée is called che (raw) koftey and is a delicacy of the south east region of Turkey where, as the story goes, Prophet Ibrahim lived and almost died of incineration.

Again, the similarity with the story of Ibrahim I knew, ended with the opening. Nimrod ordered a big fire to be prepared in which he wanted to throw Ibrahim. Divine intervention turned the fire into… not flowers but water, and the logs of wood used to build fire became fish -- a particular kind of fish that is revered to this day.

But I digress. The story of Ibrahim was narrated during the dinner as a sort of background to che koftey, and to enlighten the only outsider that was I. So, this hunter comes home with the meat of a wild animal and asks his wife to cook it. Meanwhile, Nimrod’s men in their enthusiasm to please the king with the biggest fire ever built, had cut down every tree in the vicinity and there was no firewood left for domestic use. Poor woman couldn’t tell the tired and hungry husband why she couldn’t cook. He had done his part by bringing meat and it was her job to put it on table.

On a creative impulse, she cut the meat to bits, added broken wheat and all the spices she had, and then kneaded it long and hard enough so ingredients became as one. The husband tried the novel dish and actually liked it. Of course he couldn’t tell if the meat was raw. And this is how uncooked koftey was born of Nimrod’s fire.

As for me, I found the dish much more savoury than the story. Especially impressive was the fact that it requires an awful lot of hard, physical labour, something you don’t associate with cooking.

Everyone in the group had chipped in with ingredients that included a dozen or so spices, tomato and lemon juice, bulgar, onion, green herbs, olive oil, and a few things that do not have names in English language or if they do I’m not aware. It was an all-male affair -- all 12 of them are researchers and assistant professors at Selcuk University in Konya -- but still some behaved more male than others. Two of them mixed spices with bulgar, a third one -- the biggest and strongest in the group -- pared to take over from them, while everyone else settled down on sofas and played games on large TV screen. Oh and there was one more job to do for which gamers took turn -- wiping the sweat off the big guy’s forehead while he kneaded a big lump of the mixture for nearly an hour. And did I mention that he was sweating on a night when outside temperature was below freezing?

When he was done, another fellow took charge and started making balls of the mixture. Then he pressed each ball in his hand into a tube shape and made curly little sticks that are the Turkish koftey.

In between, we chatted. Not many people, even in the metropolitan Istanbul, can understand, let alone speak a few words of English. Being with university teachers who could converse in English was therefore a privilege.

We exchanged notes on what and who we knew from the other side. I knew Orhan Pamuk and Elif Shafak, they knew Pervez Musharraf. I knew their women had recently won the freedom to wear hijab, they knew our women are forced to wear burqa. I knew Taksim Square protests, they knew of the Taliban threat. I knew Turkish delight, they knew of suicide vests.

Time to eat. I followed others and quickly got into the rhythm. You pick up a lettuce leaf, place koftey on it, squeeze a dash of lemon juice, roll it and eat. Or you replace lettuce with roti, or you combine the two. Whichever way you eat, it is spicy hot and hence the need for lassi to take the stinging bite out of koftey. But bravado carried us through and we even ate a few koftey on their own to be one up on each other. When we’d finally had our fill, it was time for dessert. After that chai, then another dessert.

"What! More food," I cried in alarm. My host laughed and translated a Turkish phrase for my benefit: "Tonight our stomachs will celebrate a festival".

I finally found a similarity between the two people, we are equally murderous in our hospitality, and we do it with humour.