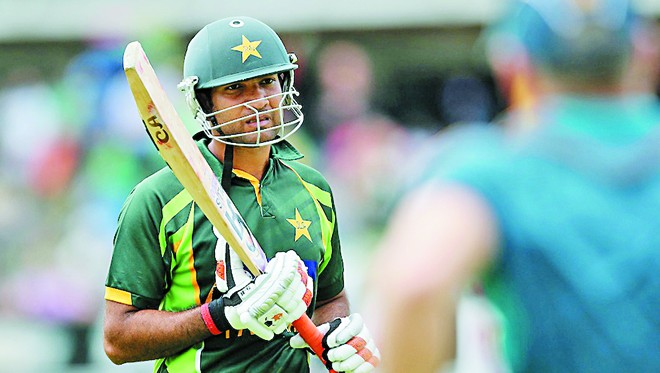 Pakistan’s ODI series win against Sri Lanka provided a fitting end to a bizarre 2013. The year had started with a victory over India in India but was followed by one failure after another until the ODI series in South Africa. Yet looking back at the year, and the Champions Trophy aside, Pakistan’s year has somehow come to par after all the initial highs and the subsequent lows. And it feels like the most important tour of the year might be the one that is most forgotten.

The tour to Zimbabwe provided Pakistan with a chance to finally give its youngsters, especially the batsmen, a low pressure and less difficult series. Instead there was conservatism in the selection -- as I, and many others, wrote about at the time -- with there being far less experimentation than, say, India did immediately before that on their own tour to Zimbabwe. Pakistan could have used that tour to see more of the likes of Haris Sohail or a promoted Umar Akmal, for example. Instead even Sohaib Maqsood -- who had just finished the season as the highest run scorer in List A matches -- wasn’t selected for the ODI squad. But through the two long forgotten T20s and a bit of the ODI series Pakistan managed to finally move on from the era of Kamran Akmal, Shoaib Malik et al. The series marked the debut of Sohaib Maqsood and the return of Ahmed Shehzad. Shehzad has since scored more runs than anyone else in Pakistani ODIs; and Sohaib has scored more runs than anyone bar Hafeez and Shehzad since his debut.

Right now it is far too early to anoint either Sohaib Maqsood or Ahmed Shehzad as the saviors of Pakistani batting -- after all, their performances still aren’t at the level that Nasir Jamshed showed in 2012, and his fall from grace is a reminder of how quickly things can change in international cricket. But the duo does provide Pakistan with a template of how to induct newcomers.

Sohaib’s rise is proof that there are few better guarantees for international success -- if ever there can be a guarantee in such cases -- than domestic dominance. Sohaib, statistically and otherwise, had an extraordinary 2012/13 season and it was a shame, and a surprise, that he wasn’t in the team as early as the Champions Trophy. But better late than never, and his performances up the order have provided Pakistan with the up-tempo number four they’ve lacked since Mohammad Yousuf’s heyday. You’d think that he might show selectors a possible belief in the domestic system -- that the revolutionary idea of selecting whoever scores most consistently might be worth a shot. Furthermore his success and performance shows that there is still hope even if you aren’t a teenage wonderkid but an all rounder elevating his game well into his 20s -- a template worth following if ever there was one.

Ahmed Shehzad’s return is more stereotypically Pakistani though. Thrown into international cricket before he was ready in 2009 -- selected on promise rather than performance -- he failed to live up to his obvious talent. His return in 2010/11 brought more success but little consistency. His third incarnation has by far been the best. There is an application to his talent that is almost rare among Pakistani batsmen -- and the fact that he scored a hundred in South Africa already places him above many of his peers. His career arc -- the discarded youngster becoming a run machine in the UAE -- is similar to that of Saeed Anwar; and if Shahzad were to achieve even half of what Anwar did he might be considered the best Pakistani opener since Anwar. Perhaps even evoking such names loads unnecessary pressure on Shahzad, but such is the life of an international sportsman.

And yet despite their success it is difficult to gauge this series or rather the past month of over-performance. Is it the positive outcome from a battle hardened unit fighting back against the critics? Is it the result of the PCB head, perhaps for the first time, giving a vote of confidence to Misbah as the ODI captain? Or is it just the law of averages catching up? Pakistan aren’t as bad as they were in the summer months, but they might not be as good as a team that can win back-to-back against South Africa and Sri Lanka. Pakistan, I guess, even at its dourest, are unpredictable.