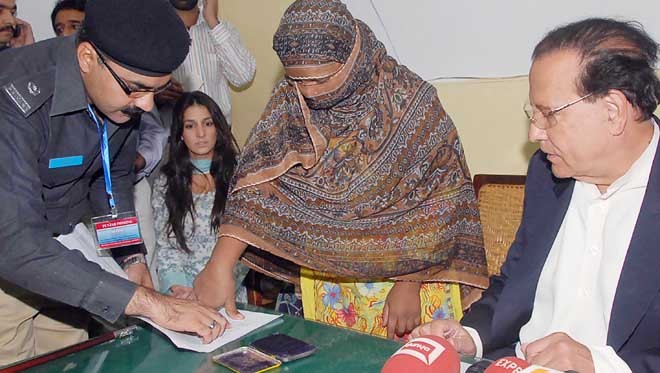 People seem to have forgotten Aasia Bibi while she languishes in one jail or the other for the last four and a half years. Her appeal for review of her death conviction remains pending before the Lahore High Court. In June 2009, Aasia Bibi was asked by her co-workers to fetch water while working on a farm in Lahore’s outskirts. Some of the Muslim women are said to have refused to drink it because they considered the utensil "unclean" after being touched by a Christian woman. An argument ensued where Bibi allegedly uttered derogatory remarks about Prophet Muhammad (pbuh). A few days later Bibi was charged of blasphemy and arrested from arrested in Ittanwalai village.

Bibi, a blasphemy accused under Section 295-C of Pakistan Penal Code, was sentenced to death by a local court in December 2009.

Under the blasphemy laws, a high court must confirm a death sentence from a lower court. Due to this legal procedure, many of those who are convicted remain on death row for years.

Talking on telephone with TNS, from an undisclosed location, Aasia’s husband Ashiq Masih said, "She is scared. There is no hope for her release".

He recalled how a mob dragged his wife to a local police station, where she was jailed and charged with blasphemy. "She has not done anything," he maintained.

Bibi’s husband and five children are living in hiding. Fearing violence from extremists, they prefer to hide their identity and often relocate their home. Last June, when they went to see her in jail in Sheikhupura, they were told that Bibi had been shifted to the Central Jail in Multan. This came as a surprise both for the victim’s counsel and the family.

The case of Aasia Bibi gained prominence when Salmaan Taseer, then the Punjab governor, went to jail to meet her and to assure her of all possible legal help. Taseer had maintained that the case against Bibi was fabricated and based on wrong grounds. He had moved a request to the former president of Pakistan to pardon Bibi’s sentence.

Taseer’s open support for Aasia Bibi cost him his life. His police guard, Mumtaz Qadri, who thought Taseer was a supporter of a blasphemer, killed him on Jan 4, 2011 in Islamabad.

An Anti-Terrorism Court (ATC) awarded Qadri a death penalty in October 2011, nine months after he had committed the murder. His appeal against the conviction is also pending before the court.

About two months after the assassination of Taseer, the then federal minister for minorities Shahbaz Bhatti was also killed in the country’s capital for talking about the need to revise the controversial blasphemy laws.

"Taseer was the last hope for Aasia Bibi," says Nadeem Anthony, council-member of Human Rights Commission of Pakistan (HRCP). "The complainant of the case, a cleric of the local mosque in Bibi’s village, is not a witness in the case. He believed what the local women told him. She was sent to jail and the case was lodged a few days after the alleged incident occurred."

The HRCP has documented scores of cases in which the blasphemy laws have been misused -- to settle personal scores or to victimise the marginalised sections of society and religious minorities. The mere fact of being a Christian or an Ahmadi in Pakistan makes an individual vulnerable to the misuse of blasphemy laws.

"There are enough legal grounds which can help Bibi’s release conditionally, if the appellate court hears her case at the earliest on humanitarian grounds. We have moved an application for this purpose," said S.K. Chaudhry, victim’s counsel.

The hearing is expected in the coming weeks and Chaudhry hopes to get justice.

"In my view, Bibi is in jail quite unnecessarily," said Hina Jilani, a human rights activist, asking: "But even if her appeal is heard and she is set free by the court, who is going to protect her in the society?"

These past couple of years, Taseer’s death anniversary has been marked by thin candle light vigils in his memory, as opposed to thousands of religious extremists congregating across Pakistan in support of his murderer Qadri, upholding him as a hero.

Jilani thinks it is quite unfortunate -- "Our politicians are not taking such issues seriously. First, many people, if their sentence is overturned, remain on the mercy of the society where they are unsafe and continued to be victimised by extremist elements. There are serious concerns about the safety of such people."