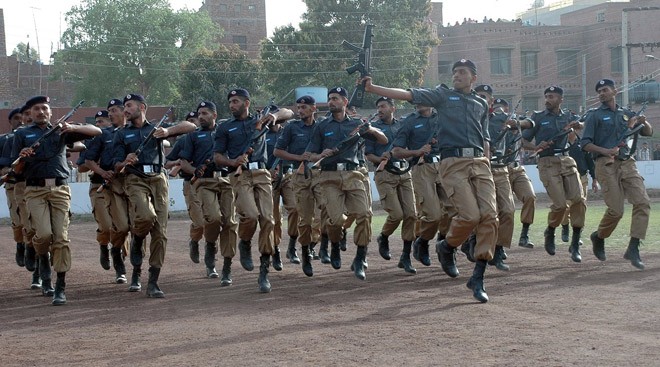 Following its own decision to set up a new counter terrorism force (CTF) in Punjab, the government’s step to transfer the Counter Terrorism Department (CTD), the main counter terrorism unit of Punjab Police, Elite Force and Special Branch from Central Police office to the Home Department of the province has created a lot of stir among the police circles in the province.

All the police officials in the province have threatened to either leave the province or resign en bloc if the move was not halted.

"We strongly believe the DMG baboos are behind the move. Three close associates of chief minister Punjab and the premier, who are from the DMG, hoodwinked them into taking such cosmetic measures," a top police official from Lahore and representative of Punjab Police Association, a platform formed to resist the move, tells TNS.

The CM has announced that the proposed force would for now work under the command of police department. But he has also told the IGP Punjab that he will have to follow the federal government’s policy regarding the establishment of the new anti-terrorism force.

Vague clarification by the CM has settled the storm for now but the 178,000-strong police force in Punjab is "very vigilant". A delegation of police officers plans to meet the CM in the coming days to convey its reservations and suggestions.

Majority of the police officials in Punjab believe that it is time to introduce the KP model of policing where both the IG police and the home secretary belong to police cadre. "There is no gap in policy and implementation level and it has been achieving results," says the police official.

The idea of raising a new force comprising ‘corporals’ and not ‘constables’ was approved at a meeting chaired by the PM in October this year. A memo of direction (copy available with TNS) shows clear mistrust in the existing police department.

"The 1500 police constables and 125 elite officials in the existing CTD shall go back to their parent departments. Induction of personnel from police into the new CTD should be kept at bare minimum. The new CTD should be established under the Home department as a discrete entity totally separate from the existing Police department, even physically. A member of every field team shall get a monthly salary of Rs75000," read some parts of the memo.

Majority of the police officials in Punjab believe that it is time to introduce the KP model of policing where both the IG police and the home secretary belong to police cadre.

The federal government, according to sources in the interior ministry, has approved a budget of Rs6 billion -- 15 times more than the budget of the existing CTD.

"It means that money is not the real issue. But one needs to bring DMG people in to get more money from the state," says a senior police official.

Punjab Police’s website reads the department has gathered data of more than 42,800 militants/sectarian activists. 634 proclaimed offenders (POs) wanted on charges of sectarian violence were arrested by the local police in collaboration with the CTD, 1,618 suspects/terrorists were interrogated, 155 POs were exclusively arrested by the CTD, 2,120 activists of sectarian organisations were placed on 4th Schedule of ATA 1997 by the CTD and 2,487 Afghan Trained Boys (ATBs) were registered by the CTD.

"People in the DMG have always wished to control the intelligence-gathering mechanism in Punjab and that was the reason the CID was put under the Home Department in 2007. But this experiment failed and in 2010 it was again put under the police control. But, they came up with another plan in 2013 in the shape of CTF," says a senior official of CTD. "If the police are de-linked from the counter terrorism department, the new department of the Punjab government would become another National Counter Terrorism Authority (Nacta)."

Earlier, on October 5, 2013 a presentation ‘Restructuring Counter Terrorism Department’, (a copy available with TNS) given to the PM on the establishment of a new department under the Home Department instead of police, mentioned that the structure of the new CTD has been "decided in view of international practice and value for money",

The presentation also talks of a security meeting at Ankara with Turkish counterparts. The proposed mandate envisages a stand-alone force, intelligence and surveillance, counter terrorism operations, detention and interrogation of suspects and prepares policy recommendations.

A senior police officer from Turkey, who is in Pakistan on the request of the Punjab government and has been working with Punjab police on reforms, tells TNS that counter terrorism department in Turkey is under the control of police.

"It is international practice to keep internal security with police. Punjab also has excellent police officials who are capable of doing the job," he says.

A senior police official tells TNS the DMG has ‘conquered’ all other ministries and departments in Pakistan. Police, somehow, is the only department out of their reach. "The move was meant only to exert authority and to induct a few DMG officers in the newly formed force," he says. "The existing CTD in Punjab has 600 officials in total who work within the meager annual budget of Rs350 million."

"The department has helped solve almost all high profile terrorist cases in Punjab including the GHQ attack, Sri Lankan team attack and life attempt on ex-president Pervez Musharraf. The government, instead of establishing a parallel force, should focus on building the capacity of existing police and counter terrorism departments," he says.

Police officials say that Pakistan is among the top five police-contributing countries to the UN peace missions over the last decade, and the professional performance of Pakistani officers in UN peacekeeping operations is rated highly. But the Interior Ministry has put a ban on sending police officials on UN missions, terming internal security as a reason while there is no bar on sending military and civil officials.

"Principal secretaries to both the PM and CM have always been DMG officials, chief secretary Punjab, interior secretary and Punjab Home Department secretary all are from the DMG. They show them only one side of the picture," they say.

DMG officials, on the other hand, believe a new force under police would make no difference. "It is not about showing authority of one group on the other but forming specialised force to fight terror. We have already seen the fate of elite force in Punjab police which was trained to counter terrorism. When Anti-Narcotics Force, Rescue 1122 and Motorway Police were established, a few lobbies had propagated that these will fail but these departments shined only because these were separated from the routine police affairs," says one official.

Police officials are not ready to buy their argument. "Why don’t they mention the prison department? It is also under Home department and everybody knows the situation. Motorway and terrorism are two different entities. You cannot fence terrorism like Motorway," says a police official.

Islamabad-based security expert Aamir Rana says the CTD has been doing a good job in the given resources. "To establish a new department instead of reforming existing departments is very dangerous. We have already seen the fate of Nacta and Crisis Management Cell -- not headed by the police and becoming almost redundant. Internal security departments cannot work without police."

"The government should focus on building the capacity of existing police force. The country has no counter terrorism policy so far but government does not hesitate from setting up new departments. They should better focus on preparing policy instead of creating mistrust among the law-enforcement departments," he concludes.