Of forbidden politics and love 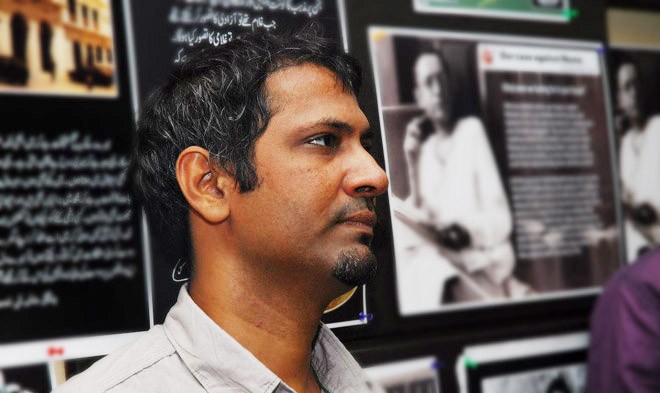 Writers and artists have always battled for free expression against radical elements. Across history, suppression in the name of righteousness and morality has followed them like a shadow. Though art is mainly seen as a form of entertainment, it is also an act of protest and resistance. Despite threats and torture, many artists and writers have continually struggled for an open society whereas others have been slain for the crime of self-expression.

The battle is as old as mankind, from the persecution of Socrates to the banning of literary classics like Ulysses, Lady Chatterley’s Lover and Madame Bovary. Close to home, the trials of Manto and Ismat Chughtai on charges of obscenity and the more recent examples of Ajit Kaur and Arundhati Roy have all borne the brunt of corrupting public morals. Currently, Islamic fundamentalism poses an inherent threat to all art forms as they are considered obscene, illicit or haram.

Rahman Abbas, a young Mumbai-based writer, has in the last decade appeared as a heretical threat to Islamic doctrine and orthodoxy. His first Urdu novel, Nakhlistan ki Talash, [2004] created uproar in the rightist Urdu literary circles and he was forced to resign from his post as a lecturer in a junior college of Mumbai. Abbas, who comes from an educated Middle class family of Maharashtra, lives in a town called Mira Road located in the north of Mumbai and that’s where I meet him for the first time. Gabriel Garcia Marquez, Milan Kundera, Saadat Hasan Manto, Victor Hugo, George Orwell and others line the bookshelves in his small study where he sits and writes.

I question Abbas about his first novel which is said to be "immensely stimulating, rich in imagery, profound in characterization, dazzling in its descriptive power." It narrates the story of a Muslim youth dealing with the identity crisis in the aftermath of the 1992-93 riots. In this novel Jamal, a terrified and tormented youth, discusses forbidden politics and his love explicitly. He tries to demonstrate his identity and historic self which ultimately leads to his tragic and mysterious end. "This novel also discusses the influence of the chaotic situation of Kashmir on the minds of educated Muslim youths of that period who had already suffered a lot at the hands of communal violence that erupted post demolition of Babri Mosque in 1992," says Abbas.

We discuss the standards of obscenity and sex in fine arts and literature in South Asia. The bold works of writers, in fact, portray the social realities of life.

Forbidden politics and love got him expelled from college. He narrates how he was ousted from his college as a result of the protests and uproar: "An Urdu newspaper had carried out several stories about the novel and termed it ‘obscene’, which later provoked some religious leaders. The religious leaders influenced some politicians and a delegation called on the management of the college. This pressure worked and I was removed without being given a chance to explain my case or allowing any committee of experts of literature to have their say on the book."

We discuss the standards of obscenity and sex in fine arts and literature in South Asia. The bold works of writers, in fact, portray the social realities of life. The current Indian cinema is also known for its bold content and the ‘item songs’ predominantly objectify women. Who sets these standards for obscenity? "In the history of Urdu literature in the twentieth century, Ismat Chughtai and Saadat Hasan Manto had faced ‘obscenity’ charges; the entire history of cases against our great writers indicates there was a minor section which was opposed to everything literature tried to unearth about human behaviour. However, Indian cinema has crossed many borders and broken conventional curtains but that same minor section of Urdu community still tries to see literature through the prism of 19th century. These people dare to dictate us now and again how to write or how to think."

As the controversy gained momentum, an FIR was registered and Rahman Abbas was arrested. However, he thinks he was fortunate as many writers stood up in his support. English, Hindi and Urdu newspapers published stories supporting freedom of expression and his novel. The Indian Express published a story titled The pen rallies against the sword.

"The progressive writers had taken up my cause as their own battle and hence, I was not afraid of conservatives. However, I had to suffer financially since I was jobless for quite some time," says Abbas.

In Pakistan where Urdu is slowly fading away, there is an ongoing debate about the state and future of Urdu language and literature in India. I ask him if he finds this situation ironical. "It is ironical as well as poignant since the situation of Urdu in India is dismal and lamentable. Though, it is Urdu which was widely spoken (including in the movies) in India but it was denied its place. On the other hand, as far as Urdu literature in India is concerned it is facing serious crisis. The readership of good and serious literature is lagging. The poetry and fiction emerging from India was not impressive. In India, talents in fiction are but rare and, unfortunately, there is not a single good critic for novels. However, what makes this debate more ironical is that even in Pakistan a lot of people have begun to ask why Urdu?"

Another of his interesting novels ‘EK Mamnua Muhabbat Ki Kahani’ narrates the story of an illicit love affair between a married rural woman and a teenager boy of her village. The woman, Sakina, who has not conceived for years becomes pregnant by an unexpected encounter with a teenager boy -- Abdul Aziz. As he grows up, Abdul Aziz fights for liberal and secular values and opposes Urdu which is not his mother tongue but is forced upon the villagers by the religious forces.

The novel discuses the oppression of indigenous languages and cultures and maintains that religion cannot be enforced upon individuals. The novel also portrays a struggle between secularists and religious fanatics.

Despite the fact that India is the largest secular and liberal democracy in the world, why in his opinion religious fanatics still present a threat to art and literature, I ask. Arundhati Roy had rightly said that India lives in several centuries at the same time, says Rahman Abbas. "MF Hussain was harassed by rightwing fanatics. These anti-Arts element had filed a number of cases against the painter. Hence, he preferred to leave the country for good. The fanatics have even objected on the clothes of Sania Mirza. But the spirit and culture of India is liberal and secular. We have fought many menaces and we have the courage to continue our struggle against fanatics."

A Kafir Among the Believers will be Abbas’s debut English novel. "The Kafir in this novel is the protagonist who is paradoxically a Muslim but fails to become what his society desires him to be," says Abbas.

Of forbidden politics and love