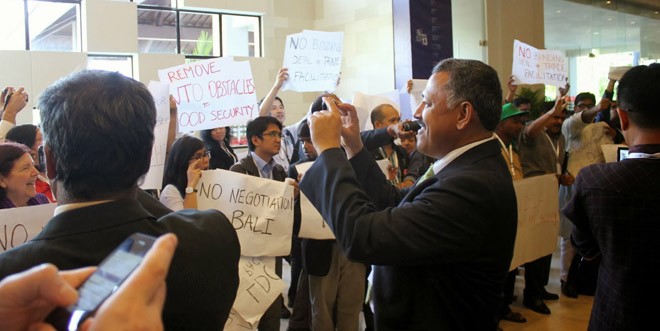 It was touch and go, over a period of six intense days at Bali early December. In the end, the World Trade Organisation’s Bali ministerial conference delivered a trade liberalisation package -- the first ever deal that the WTO could craft ever since it came into being in 1995. This came about against the backdrop of a frustrating 12-year stalemated Doha Development Agenda (DDA) and a spaghetti bowl of regional trade agreements being pursued widely. Thus, the spirit of multilateralism prevailed.

The seven-year Uruguay Round Agreement (URAs) negotiations ended in the establishment of the WTO in 1995. Getting the WTO itself was a big achievement in spite of US’s opposition. The WTO included a binding dispute resolution system, and new disciplines on services, intellectual property, agriculture, textiles etc. The deals were done in a single undertaking manner i.e. ‘all or nothing’, which meant trade offs.

Following the WTO agreement, the first ever full scale negotiation, DDA, was launched in Doha in 2001. Its remit was to address problems with the URAs, which were negotiated in the 1980s when the developing world had little understanding. It was launched against the backdrop of the 9/11 tragedy to send a signal to the world that the international community will not be cowed down. The only way to get the poor to join the talks was to label DDA as a development round.

As negotiations on the DDA progressed, the poor realised that the rich want only better market access while paying lip service to development, hence the continuing stalemate. On the other hand, western agriculture subsidies were always the spoiler. Europe inter alia wanted new deals on investment, competition, transparency in government procurement and trade facilitation as a trade off against reforms of their farm subsidy regime. However, many in the developing world were opposed to all the four issues and the Cancun Ministerial conference of 2003 collapsed without any conclusion.

As expected, the level of ambition between the rich and the poor are always at crossroads and thus the text on trade facilitation was not a consensus one, but it was sorted out in the end.

The Cancun collapse was salvaged in Geneva in July, 2004 and it was agreed that DDA negotiations should continue, but retaining only trade facilitation among the four issues. Thus, WTO members have been working relentlessly on the DDA to try and arrive at a conclusion. That came close in July 2008 when members agreed on 90 per cent of the issues, but that too failed due to the US opposition to India and China’s stand on special safeguards on farm good imports. Thus, India and China became the spoilsport. In fact, it was the US reluctance to address its subsidy regime on cotton which was the real deal breaker, as it affected many African countries.

As expected, the level of ambition between the rich and the poor are always at crossroads and thus the text on trade facilitation was not a consensus one, but it was sorted out in the end. That was possible after the agreement on public stockholding of food grains breaching the 10 per cent subsidy limit was crafted without tying it down to a four-year peace clause, but until a permanent solution is found. As India’s trade minister, Anand Sharma, triumphantly said: "A historic day for the WTO. India’s food security concerns are addressed".

The USA was recalcitrant, as it has little appetite for the DDA and has therefore been pursuing two mega regional deals. India’s hard stand made pundits feel that she is walking into a trap and thus negotiators will go back empty handed. Miraculously, a deal was struck at Bali.

The US wanted the accord on trade facilitation badly which was the trade off that India used for its demand on food security flexibility. However, trade facilitation i.e. cutting down the red tape in customs procedures is a win win deal, which was welcomed by all. This deal is expected to generate about $1tn gain to all countries, of which most will accrue to the developing world.

In the end, multilateralism stood its ground, which is the best way forward for all. The scene will now shift to Geneva, where negotiators will work out the nuts and bolts of what they have agreed at Bali, and tackle the unfinished agenda of the DDA over 2014 and beyond.