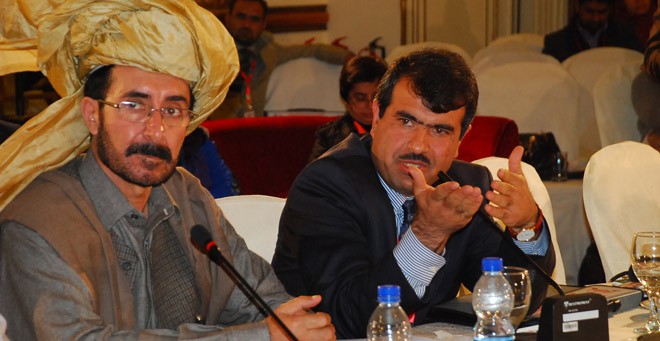 The South Asian Free Media Association (SAFMA) organised a two-day bilateral conference (13-14 December 2013) on the impending ISAF withdrawal from Afghanistan and the prospects of a bilateral partnership for peace and cooperation post-2014. The conference brought together some 300 parliamentarians, security analysts, and media practitioners from both Pakistan and Afghanistan to debate the issues arising from the latter’s difficult political and military transition, and its repercussions for the region as a whole.

The conference’s keynote speaker, author and analyst Ahmed Rashid, underscored the need for both countries to overcome their immense mutual trust deficit. He pointed out that the existence of a "peace lobby" within the Afghan Taliban (as opposed to the Pakistani Taliban) was grounds for optimism that Afghanistan could make a secure political transition post-2014. Afghanistan’s former minister for information, Abdul Hameed Mubariz, also emphasised the importance of overcoming this mistrust, with economic cooperation being a possible starting point.

The common thread of the panelists’ discussions was that Pakistan had a key role to play in Afghanistan’s transition, given their shared geography and historical and ethnic ties. This also meant, however, that Pakistan would have to employ a far greater degree of transparency in its dealings with its neighbour. The primary emphasis, several speakers argued, should be on a well-planned transition coupled with reconciliation, rather than on an exit strategy.

The common thread of the panelists’ discussions was that Pakistan had a key role to play in Afghanistan’s transition, given their shared geography and historical and ethnic ties.

A key aim of the conference was to give political leaders from both the countries a forum from which to voice their concerns regarding the prospects of bilateral cooperation between Afghanistan and Pakistan, and to interact both formally and informally in the hopes of reaching a consensus on potentially controversial issues. Accordingly, the conference attempted to ensure that all Pakistan’s major political parties -- and especially those whose constituencies bordered Afghanistan, such as in KP and Balochistan -- were given the chance to exchange views with their political counterparts from Afghanistan’s Wolesi Jirga.

Representatives from the PTI, Asad Umer and Shafqat Mahmood, spoke of their party’s commitment to peace in Afghanistan and the need to shun foreign intervention in building a relationship of trust. Former minister Qamar Zaman Kaira and Senator Farhatullah Babar spoke on behalf of the PPP and argued that it was essential for both the countries to recognize that giving sanctuary to militants on either side was not in each other’s interest. Senator Jaffar Iqbal from the PML-N assured the conference’s delegates that his government was committed to measures for peace and reconciliation with Afghanistan, while Senator Mushahid Hussain discussed the outcomes of his recent meetings with counterparts in Kabul and argued that the concept of "strategic depth" should no longer govern Pakistan’s relations with its neighbour. Former KP chief minister, Pir Sabir Shah, from the PML-N also spoke of the economic benefits that could accrue from improved relations between the two countries.

Hafiz Hussain Ahmed of the JUI-F held that it was important that both the countries’ military establishments were willing to commit to peace in the region, adding that peace with India was equally crucial for this purpose. Aftab Ahmed Sherpao of the QWP focused on resolving the issue of border management, recommending that people on both sides of the border take responsibility for checking illegal cross-border movement. Senators Haji Mohammad Adeel and Afrasiab Khattak of the ANP spoke of the common ethnic ties between Afghanistan and Pakistan and the importance of maintaining a sense of brotherhood in the face of political turmoil and violence.

Dr Abdul Malik, the Chief Minister of Balochistan, also spoke at the conference and said that a complete withdrawal of international troops was unwise: the troops should draw down in phases so as to prevent any possibility of the Taliban wreaking havoc. Sartaj Aziz, special advisor to the Prime Minister on Foreign Affairs, underscored the importance of an international consensus on Afghanistan’s sovereignty. He held that all promises made to support Afghanistan by the international community must be fulfilled, adding clearly that a proxy war between Pakistan and India played through Kabul would damage all three countries’ interests and must be avoided at all costs.

The conference culminated with the approval of the Islamabad Declaration: a document drawn up at SAFMA’s previous bilateral conference in 2009 and now amended to incorporate delegates’ concerns regarding border management issues and the role of women in Afghanistan’s transition. The crux of the declaration was that both Afghanistan and Pakistan must work together to prevent the void created by the withdrawal of ISAF troops from being exploited by extremists on both sides. It was imperative that the two neighbours refrain from acting against each other’s national security interests and tackle the narrative of extremism that now dominated the political and social discourse.

Afghanistan’s parliamentarians in particular emphasized their concerns about the recognition of the controversial Durand Line, pointing out that it had not been the outcome of a democratic exercise. Nonetheless, in the interests of reaching a consensus on border management procedures, both countries’ delegates agreed that the declaration should refer to a non-specific border without prejudice to the position of either country.