No hunger for being the people’s party 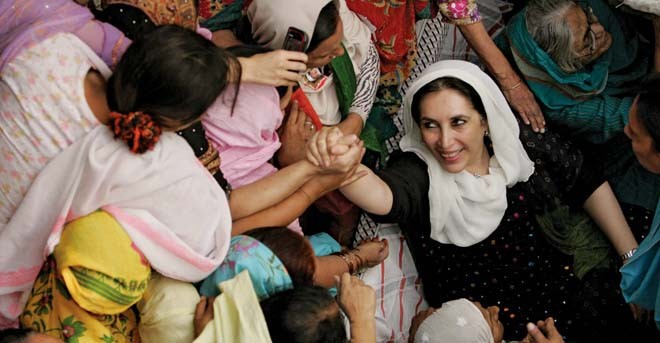 A full six months have passed since the latest general elections in Pakistan and the winners and losers and the in-betweeners are amply clear to all. That’s more than enough time to have taken stock of what went wrong, or right, for the parties concerned and for them to shortlist their respective heroes and villains, therefore. Nawaz Sharif’s PML-N and Imran Khan’s PTI emerged as the biggest winners and PPP, Asfandyar Wali’s ANP, and Shujaat Hussain’s PML-Q the biggest losers.

There is little evidence available that this -- stocktaking to plan ahead -- has happened but we can be fairly sure that it basically hasn’t as no meaningful reshuffling of leadership has taken place in most parties. No plans going forward are being discussed or shared with public. Could it be that this could be down to the fact that nearly all key parties -- with the exception of ANP and Altaf Hussain’s MQM -- have managed to win the spoils of varying electoral victories in the shape of government formation at the centre or the provinces, or the combination of the two, and, therefore, feel there’s no need for introspection? The corollary being that if you are ensconced as government, why shake down the party and conduct an in-house accountability to attract unwanted public scrutiny?

The PML-N is in power in the Centre and in Punjab with a hefty share in Balochistan, PTI in Khyber Pakhtunkhwa, and PPP in Sindh. Whether they won big or lost big, there’s enough ground to warrant critical self-analysis -- after all, PML-N expected to put up a strong showing in Khyber Pakhtunkhwa and do decently well in Sindh but didn’t. PTI expected to sweep the entire country and for Imran Khan to become prime minister but didn’t. And PPP expected to do much better than the pathetic showing in Punjab, Khyber Pakhtunkhwa, and Balochistan but didn’t. But while it is understandable that because PML-N is expected to complete five years lording over Pakistan and Punjab they are not too pushed about stocktaking right now. Or that PTI is having the best of both worlds in the given situation where it is ruling in Khyber Pakhtunkhwa and stealing the thunder of the PPP as the main opposition party through politics of outreach, dharnas and agitation and so is not bothered about the medium-term future.

But what’s with the deafening silence in the PPP ranks? Its contentment with mere Sindh is baffling given their size, weight, influence and history. Considering recent developments, it’s easier to draw up a list of what they don’t want than one of what they want. For starters, they certainly don’t seem to want to do anything until the next general elections and, which considering that Asif Zardari is on record as telling Nawaz Sharif that he should complete his tenure means PPP would rather do nothing for five years. Is it that PPP is exhausted with politics having unexpectedly survived five years in government?

While this would certainly explain why PPP is bafflingly indifferent to the fact that local elections are being held and that one would imagine this is such an excellent opportunity to roll back the disappointments and heartaches about the poor showing in large parts of the country -- they’ve recorded the second worst electoral performance ever -- and raise morale through the rigmarole of electoral mobilisation.

And yet, not only PPP performed spectacularly poor in Balochistan local elections held earlier this month. A grand total of only 22 seats out of over 4,500. JUI-F, PML-N, PKMAP and NP bagged between 700 and 1,200 seats apiece. And if this debacle is conspicuous by an absence of sound bites from within the PPP from either a leader or a worker, or even external comment about it from rivals (who almost seem to have expected the near-absence of PPP as even a contender), then even more perplexing is its near-ignorance and virtual absence of any activity about the fact that in the next 10 weeks there will be local elections in Punjab, Sindh, and Khyber Pakhtunkhwa.

What’s going on? PPP has always been in the forefront of opposing local elections held by the military but what happens when the first local elections are being held by civilians in living memory, including by its own government in Sindh? An institutional indifference so pronounced one could mistake it for contempt. But why would the ‘largest’ and probably the ‘oldest’ free political party in the country be so detached from an opportunity to reconnect with the voters that is as big occasion if not bigger than the general elections? Why let this opportunity to wrest back its footprint in the three provinces from where it has virtually been wiped out in terms of representation in both National Assembly and the respective provincial legislatures go waste?

The answer may have something to do with the leadership issue in PPP. No one really knows who’s in charge of a party that polled 7m votes in the May 2013 elections even if this was half the amount it bagged in the preceding 2008 elections. Is it Asif Zardari? But his leadership style is predicated on the principle of absence rather than presence. He hasn’t called a chief executive council meeting to discuss future strategy of any kind after the elections. About the only times he calls meetings are on the various anniversaries the party is fond of commemorating. And he just seems to have gone into hibernation deserved as it may be after a rough five years.

Is the leader Bilawal? Sure, being at the helm of the Bhutto mantle is as big as it gets within PPP but what about regular party meetings and frequent public/voter outreach exercises? Apart from when he practices his Urdu at the anniversary events, Bilawal only speaks through Twitter but, surely, the PPP’s vast majority of sweaty voters are not the tweeting types. So, is he speaking to merely a non-captive audience? Just weeks ago, he attained the minimum age to become eligible to run for election but there is little indication he will do so anytime soon to lead the party after coming on a par with aides who have worked for their status of legislators by competing with rivals. Granted Bilawal needs practice but considering that he doesn’t have to work for leadership of the party he surely can focus on party meetings on strategy that don’t necessarily have to be public or media affairs.

Meeting and being mentored by the likes of safe old hands: Aitzaz Ahsan, Raza Rabbani, and Khurshid Shah is surely something that should be a priority. If he wants to lead the party then he needs to diversify his in-house information sources from merely Asif Zardari and Faryal Talpur, no matter how expert and reliable they are. If he wants to be able to tread firmly the prickly paths that Zulfikar Ali Bhutto and Benazir Bhutto took, he will have to embrace and deal with alternative voices in-house before he can take credible dissenting potshots at Nawaz Sharif and Imran Khan. But there’s little indication of any urgency that Bilawal feels in stocktaking for long-term party plans or even responding to short to medium term challenges and opportunities by taking advantage of the local elections to not just stem erosion of the party from the minds of its voters but also the general public -- would be voters -- wearied by mouthy rhetoric, and more importantly, to brainstorm about regaining much lost ground through local election party mobilisation.

If the prospects of battling elections don’t entice the PPP any09more, particularly when they have even more to lose considering no further elections are scheduled for four years after February 2014, then there are serious issues with the party and some hard questions that need to be answered to the satisfaction of its supporters: How can PPP claw back to contention in three provinces and at the national level by ignoring the local elections? Why is there no strategy other than hope that incumbency attrition of the Sharifs will somehow automatically convert into electoral advantage for the Bhuttos in four years’ time? Why can’t governance and performance improve in Sindh if Sindh is the trump card for the party? And why can’t Bilawal start his electoral and governance career by becoming a member of the Sindh Assembly and work his way upwards to the province’s leadership if the party wants the Bhuttos to remain the mainstay of its own and the country’s politics? If the party doesn’t know what it wants, how can its voters?

No hunger for being the people’s party