Dilip Kumar…in his own words 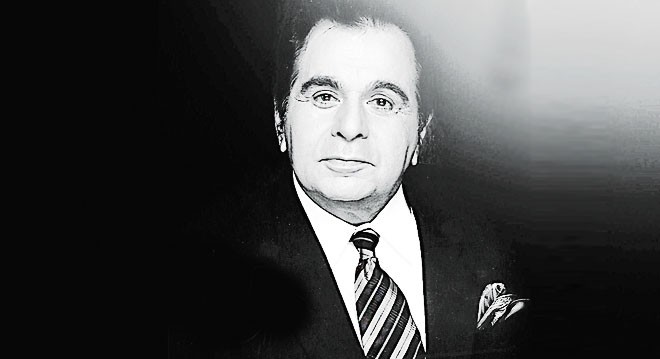 The tragedy king turned 91 this year as Indian cinema turned 100 and featured on the cover that got everyone talking, Filmfare’s 100 years of cinema edition with two superstars who claim he’s been the biggest influence on them Amitabh Bachchan and Shah Rukh Khan. With all the talk of the revival of cinema in Pakistan these days, it’s more important than ever perhaps to talk about the attitude it take to build a cinematic success story. Over to the legend Dilip Kumar himself, no one can say it better than the man who did it best…

On beginning his career at Bombay Talkies

I spent the initial months at Bombay Talkies observing Ashok bhaiyya (Ashok Kumar) who was shooting for Kismet (1943). He was a superstar and he welcomed me with spontaneous affection when Mrs Devika Rani (film legend, part owner of Bombay Talkies and the lady who discovered Dilip Kumar) introduced me to him. I used to sit quietly on the set watching him perform ever so effortlessly and naturally. He told me something that became a guideline for me. He said, "Acting is all about not acting. I know it’s a confounding statement and will perplex and haunt you. But you will understand when you face the camera yourself."

I was always a painstaking individual. When I had to prove something I worked with relentless determination, whether it was scoring in a football match in school and college or securing high marks in literature, history, geography and Persian to make up for the low percentage I got in mathematics. I made sure I was ahead of my class fellows. As an actor who had to teach

himself, it was imperative for me to create my own space in the competitive profession. I realised early in my career that my screen presence should essentially have something of my own personality. My personality was not flamboyant or given to exhibitionism of any kind. For example, it’s not that I consciously developed a style of delivering dialogue in a soft voice. That’s the way I speak in real life too.My father never shouted or ranted even when he was upset. My mother was gentle and docile. Even at work, I befriended people who were simple and refined. Sashadhar Mukherji, Anil Biswas, Narendra Sharma, Amiya Chakravarthy, Gyan Mukherji and, of course, Ashok bhaiyya were my friends at Bombay Talkies. Nitin Bose (director) became a friend after Milan (1946) and he changed the way I interpreted and studied my scripts and roles. Real-life influences impacted my acting style to a great extent in the early stages. Because that’s where I found my inspiration, especially since I had to be my own instructor.

On the much talked about Dilip Kumar-Raj Kapoor ‘rivalry’

I’ve clarified many times that Raj and I were like brothers. Our families bonded when we were school-going boys in Peshawar. In Bombay,we found ourselves studying in the same college, The Khalsa College. We were keen football players and I was always welcome at his house in Matunga like a son of the house. He used to tell me that I should consider acting as a profession. ‘You are so handsome, you can become a star,’ he’d tell me. I thought it was all right for him to say that because he was the eldest son of the most admired and popular actor of the time, Prithviraj Kapoor. Talent was in his genes. As for me, I didn’t know anything about acting and I was a painfully shy chap. As destiny would have it, some years later, it gave us both much happiness to be in the same profession. It did not bother us at all that the media was writing about our so-called rivalry because we knew what we felt for each other and how deeply we cared for each other’s well-being and success.

The challenge was more for the directors and writers. I had made up my mind in the early years of my career itself that I would not accept a film for the remuneration offered. The script and the director had to meet my expectations. When I became recognised after Jugnu (1947), producers came to me with all sorts of scripts saying it is your chance to make a fortune. Some of them said they had roles of a lifetime for me. It’s a common ruse in the business to take an actor for a ride. I remained selective in my choice of scripts and directors. I chose to work with Ramesh Sippy in Shakti (1982), Yash Chopra in Mashaal (1984) and Subhash Ghai in Saudagar (1991). I could sense their admiration and respect when they came to me with their offers. I liked the scripts and their approach. I could see the triumph on their faces when I agreed. It was wonderful especially to work with Yash who was known to me for years. He was my breakfast buddy during the shooting of Naya Daur (1955) in Bhopal when we got together and made omlettes of any number of eggs we could lay our hands on and had everyone come sniffing to the kitchen.

I believe Amitabh is an accomplished and complete actor. Shah Rukh is extremely popular I understand. I’m not aware whether they have copied me. Generally speaking, it becomes easy for a serious actor to take a reference from a work he has liked and build on it. It should not be termed as copying or imitating. That’s what mimics do for a living.

Salim and Javed told me they were inspired by Ganga Jumna when they wrote the script of Deewaar (1975). The positioning of the brothers on either side of the law bore a similarity. I was happy for Yash (Chopra) when Deewaar became a success. It happens everywhere in the world whenever a film attains immortality.

On his experience with the Big B, SRK and the Khans in general

Amitabh was and still is a disciplined actor and a well-mannered gentleman. We shared very good vibes and contrary to gossip in the media both of us knew the profile of our characters and our scenes together before the film mounted the set. I often mentioned to Ramesh (Sippy, director) how impressed I was by the way Amitabh held the scenes where he had minimum or no dialogue and the camera was focussed on him. I remember telling Ramesh here is an actor who has understood the secret of acting for the camera. Most actors act without knowing what the camera is doing or not doing or where its eye is trained.

Shah Rukh is a charmer and a well-brought up young man. He has always been loving and respectful as well-bred Pathans are with elders. I know Saira likes him a lot. As a matter of fact, I’ve found Shah Rukh, Aamir (Khan) and Salman (Khan) coming forward spontaneously to hold my hand and escort me affectionately at crowded film events as sons would when a father needs to be protected from elbowing crowds. The gesture speaks volumes for the way they have been brought up and for the love they genuinely feel for me.

On the actress who would become the love of his life, Saira Banu

(1974). Off screen, I was aware of the pains she took to achieve perfection in everything she did. But it surprised me to find her working on her character in Sagina almost the way I worked on my roles. When I mentioned it to her she laughed and remarked that she learned it all while working with me in Gopi (1970). "Haven’t all the actresses you worked with quietly taken lessons from you?" she asked. Yes, as my wife, if there’s one precious person God has given me after my mother left me desolate and alone in this world, it’s Saira. Sometimes she’s the mother I miss, sometimes she’s the friend I like to share jokes with, sometimes she’s the wife who is fiercely possessive about my love, sometimes she’s the fan who never tires of admiring the hard work I’ve put into my job. Who can be luckier than me?

These are excerpts from the Dilip Kumar interview in Filmfare’s 100 years of Indian cinema special edition. The interview was conducted by Meera Joshi.

Dilip Kumar…in his own words