Wet and wild in the Amazon 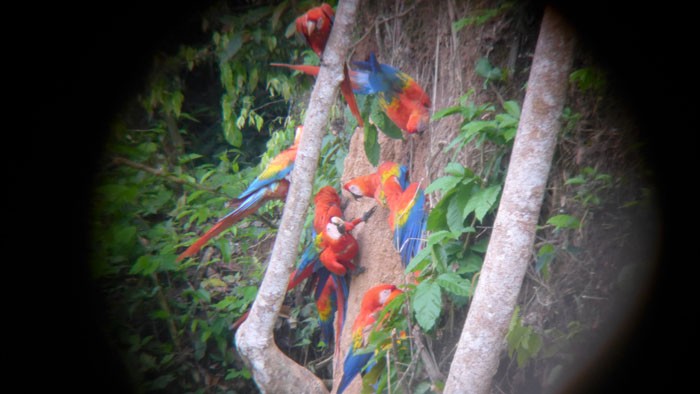 The expanse of the rainforest, muddy river, endless chirping and chattering of birds, fruits made in heaven, pouring rain, and an infinite number of blood-thirsty mosquitoes… These were the sights and sounds, or shall I say bites, I recall from a three-day visit to Tambopata reserve of Amazon rainforest in Peru in October this year.

We were a group of 15 tourists, mostly English with two Turks and one Pakistani. One of the first things we noticed was that the trees were quite a sight -- the ironwood looked like iron poles that somehow became trees, the walking palm trees appeared to be taking a walk; just having a pause to decide which direction to take.

You don’t find interesting things in Amazon just by looking around -- you have to ‘observe’. A magnificent owl butterfly hidden within the dense foliage may be inches away but you will see it only if you are paying close attention. Similarly, the head of a caiman in the river will appear like another floating piece of wood, unless you are watching carefully. A bull ant feasting on snake skin could be even easier to miss.

Fortunately, we were accompanied by our head guide, Wilbert, and two local guides who spotted what we, the urbanites, often would not.

Eidul Azah fell on the second day of our visit. As I woke up early in the morning to the sounds of the birds, my mind wandered to how family and friends in Pakistan would be celebrating the festival. I was pleasantly surprised when the two Turks came and warmly greeted me with "Bayraminiz kutlu olsun". I didn’t understand the words but I understood the meaning. "Eid Mubarak", I replied, and they understood me too.

Somehow, this exchange of eid greetings with the Turks made me feel that I was not too far away from pure and cherished in the sacred Abrahamic tradition.

We went around in a motorised canoe to explore life around the river. As the steersman skillfully maneuvered the long canoe along river banks, the guide in the front pointed out unusual creatures to our delight. We found a number of families of capybara, which is the largest rodent in the world. The ones we saw grazing on the bank were relatively big in size, perhaps more than 50 kg in weight, and looked like a barrel that had somehow grown legs.

In another place, we literally found hundreds of butterflies around us, far more than we could have expected. We also saw the butterflies swarming around side-neck turtles -- as if they were kissing them. And, to our surprise, the guides told us the butterflies are drinking turtle tears for nutrition.

At the dining table, Wilbert told us that once we reach the Peruvian city Cusco, we must treat ourselves to a specialty -- roasted guinea pig. I couldn’t help laughing at the idea of a traditional Pakistani-Muslim being tempted with roasted guinea pig and that too on Eid! Wilbert noticed that unlike other group members, I wasn’t impressed with his sales pitch. He asked me if I don’t like guinea pigs. I told him, I am their best friend, not only do I not eat pigs, I leave them entirely alone. It was Wilbert’s turn to laugh, he got my point.

At night, we finally found in the river what we were so eager to see -- caiman. We were lucky enough to see both the white belly caiman and the dwarf caiman. These were young and just about two to three feet long. We could lean out from the canoe to have a closer look without fear of becoming their dinner.

I was taken aback when one of our guides casually told us that as a kid he loved hunting caiman because he found their tails delicious. Soon, he got out of the canoe and quickly grabbed a caiman with no fear or hesitation, reminding us of the feats of the late Australian wildlife expert Steve Irwin. Mercifully, he let the poor caiman off gently and with its tail intact.

For the locals, Amazon is a giant self-service -- all-you-can-grab buffet restaurant. All that moves or doesn’t is a fair meal, be it a caiman, a tarantula, a snake, a bird, a potato, or a mushroom. As for drinks, well if you don’t fancy the rainwater, the fruit is so juicy; it seems to be from heaven. You can drink a whole jug of papaya juice as if it were a single glass and be ready for the next.

Along with canoe rides, we did day and night jungle walks. The walks were not without their challenges. When it was sunny, it was so hot it felt like we were exercising in a sauna. When it rained, it poured so heavy it felt like we were in a car-wash. And whether rain or sunshine, it was always so humid that just standing still made us sweat.

If the animals were captivating, the birds were enchanting. Their calls and colours filled the trees with life. We saw quite a few birds, including black crowned heron, giant cowbird, snowy egret, toucan, chestnut-fronted macaw, stinky bird, and kingfisher. Our guides were good at mimicking bird calls and at times their calls were able to bring the birds out of their hiding places. While each bird was beautiful in its own right, it was the macaws with their bright blue and red colours that enamoured us.

Watching the wildlife in the jungle was a different experience compared to watching it on the National Geographic television channel. Just to catch a good look at the macaws, from as close as 200 metres, we got ready at 4am, took a 30-minute-long canoe ride, a 60-minute-long walk, and then sat for a few more hours hiding like hunters in a makeshift hideout. Had it rained, the whole effort would have been in vain. Realising what it took to see the macaws, I quietly bottled up my wish to watch the much rarer and stealthier anacondas.

The guides had brought telescopes to watch birds, enabling us to observe their features in detail. They told us how to take photographs of birds through the telescope, some of which came out surprisingly well. They also showed us pictures of the spotted birds in books about the birds of Amazon. Seeing their pictures in the books reinforced the feeling that we were having a truly worthwhile experience.

Along with the wildlife, some of the traditions in tribes of Amazon also amazed us. Wilbert told us that in some of the tribes multiple men could be married to the same woman. He added that contrary to what one may expect, there is no infighting among the men and all of them provide and care for the children of the union. Seeing the shock on my face at the existence, much less success, of polyandry, he added, "Remember, it is not London, it is Amazon."

The highlight of Eidul Azah is sacrifice and sacrifice we did. Not by distributing sacrificial meat to the poor but donating our own blood to mosquitoes. While in our hearts, we feared the spiders and snakes, it was the mosquitoes that turned out to be jungle’s weapon of mass destruction. The insect repellents could slow the mosquitoes down but there simply was no stopping them. Wilbert told us that there are 24 tribes of mosquitoes in Amazon that do one hour shifts! Fortunately, I was a little better trained than the others for the mosquito-mayhem, thanks to many a long summer night and the power cuts in Pakistan.

The only thing worse than the mosquitoes was the rain. One day it rained so hard, it transformed the walking paths into a series of puddles with some dry patches in between. We waded through the puddles wearing long rubber boots but the water would find its way from over the top of the boots.

Rain also changed the river -- it gained a few feet within hours and was littered with debris.

Instead of simply powering through the river as if it were a highway, the canoe-steersman now had to play ‘dodging cars’ with the many floating logs, swerving right and left, making us scream and laugh.

As I look back at the experience, the wildlife we saw is fading from my memory but I can still clearly remember the mosquitoes and the rain. I guess there is a reason the place is called ‘rainforest’!

Wet and wild in the Amazon