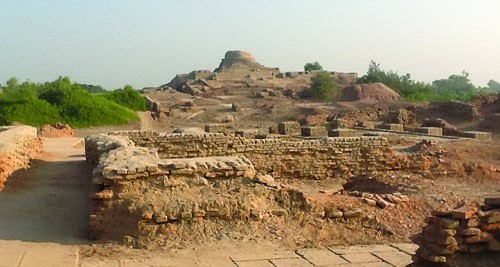 Bilawal Bhutto Zardari visited Mohenjodaro last month and promised to raise funds for the protection of the site after a British newspaper reported that this 5,000 year old archaeological site would not last another 20 years unless urgent steps were taken for its protection.

Mohenjodaro, declared a World Heritage site by the Unesco in 1980, is termed as one of the oldest urban settlements in the world, built around 2600 BCE. It is one of the largest settlements of Indus Valley Civilisation.

Mohenjodaro or Mohan Jo Daro is 40 kilometre away from Naudero, the ancestral home of the Bhuttos where Asif Ali Zardari set up his presidential camp during his tenure, is an important location.

Given the links of the Bhuttos with Mohenjodaro as the largest landlords of the area, one wonders what took Bilawal this long to visit this historical site and highlight its significance.

The Archaeology Department of Sindh, however, contests the claim of the British newspaper The Telegraph saying that it is a result of negative reporting by local media based on assessments done long ago. "Local journalists often do negative reporting due to the lack of technical knowledge and when the same is picked up by the international media, you see reports like the one carried by The Telegraph," says Qasim Ali Qasim, Director Archaeology in Sindh, the caretaker body of Mohenjodaro.

Qasim says the quote that "brick walls could turn to dust within 20 years" is attributed to Dr Asma which is based on a 30 year old assessment.

The director claims that the newspaper did not publish his blog clarifying the position of the Department of Archaeology based on some important facts.

Contrary to the claims of the Archaeology Director, experts who have recently visited Mohenjodaro say the site is in shambles. "It is deteriorating. It was in better shape 25 years ago when I visited the site last. We did not see any significant work in progress," says Zeenat Hisam, a researcher from Karachi who visited Mohenjodaro along with her two Korean friends.

She also found the condition of the museum disappointing.

The Telegraph reported that 350 labourers would be required to work constantly to put a protective layer of mud on the walls to stop rain and river water from destroying the bricks.

The responsibility of protection and maintenance of Mohenjodaro was shifted to the government of Sindh in April 2011 after the Department of Archaeology was devolved in the wake of 18th Amendment. The provincial government received Rs75 million from the federal government as part of the National Fund for Mohenjodaro. The Sindh chief minister also contributed Rs100 million to the fund.

But instead the executive committee of the fund headed by the provincial minister for culture decided to invest the amount on the pretext the proceeds from the profit will be spent on the maintenance of the site.

Experts believe the site’s preservation needs urgent measures which would require huge funds. "It’s a positive sign that Bilawal Bhutto has made an appeal to mobilise overseas funds for the protection of Mohenjodaro. Only a person of his stature can take up this challenging task," says Haleem Sharar, editor of a special journal, Archaeology Quarterly.

Obviously, any efforts aimed at saving Mohenjodaro by Bilawal Bhutto deserve appreciation but before he goes for international funding, the provincial government of his party needs to be seriously pursued to contribute towards the protection of this important site. Sindh government project, ‘Prevention, Protection, Promotion and Development of World Heritage -- Mohenjodaro’ estimates at least Rs1000 million are required. The provincial government allowed a PC-1 of only Rs285 million spread over four years to be approved last year while only a tiny amount of Rs20 million was allocated in the budget of the current year. But not a single rupee has been released so far.

It was only after Bilawal Bhutto’s visit and his comments to The Telegraph in which he expressed shock and disappointment over the deteriorating conditions of this historical site that the Sindh government was moved and in a recent meeting promised to release Rs20 million soon.

Seeing the government’s seriousness, the Archaeology Department has issued tenders for certain works on the site even before the release of funds. "We are optimistic," says Director Qasim.

The director says the new project envisages preparation of the second master plan, conservation work and improvement on facilities for visitors.

Once the funds are received, the number of staff at Mohenjodaro will go up from 90 to 121 whereas an archaeological engineer has already been appointed. Besides, around 250 labourers are already available for service in nearby villages and can be called as daily wagers when required.

The new project of the Sindh government envisages a whole range of steps and actions that would definitely result in better protection of this important site. Equally important is to learn from past experiences.

A huge sum of $23 million was generated through "Save Mohenjodaro" international campaign jointly run by federal government and Unesco but very little is known about the usage of that money.

The visitors and local journalists claim the site is continuously decaying for the last two decades, raising the questions regarding the use of funds generated to save Mohenjodaro.

The Archaeology Department accepts the site has not been able to attract tourists it deserves and places the responsibility on the tourism department.

Generally, appalling law and order situation and terrorism threats are termed as the main reasons behind declining tourism in Pakistan. Precautionary but adverse travel advisories also contribute to it.

This may be true in the case of Khyber Pakhtunkhwa (KPK), but in Sindh, especially in interior Sindh, hardly any attack has been reported in the recent years. "It’s true that since its first excavation in 1922, there has not been a single mishap with any tourist on Mohenjodaro," says Qasim.

Unfortunately, the ruins of Mohenjodaro do not have even a dedicated website on internet in this age of information technology, leave alone any special programmes to attract visitors.

One can hope that besides mobilisation of funds and better management of the site, Bilawal Bhutto Zardari would personally get involved in promotion of the Mohenjodaro to attract global and domestic tourists.