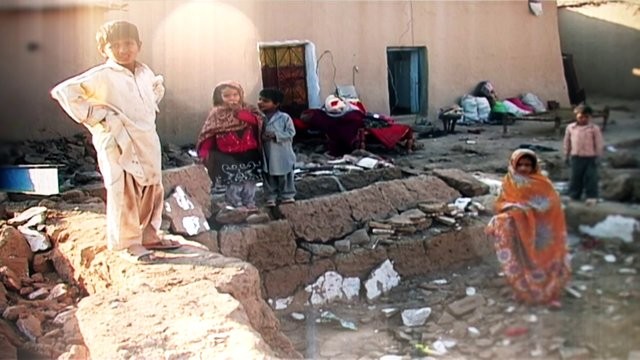 Curiosity fired by the recent controversy surrounding ‘Wounds of Waziristan’, a documentary with the declared aim of highlighting the loss and endurance of drone strike survivors, I decided to take filmmaker Madiha Tahir’s advice to potential critics, and watched the movie to judge for myself.

Tahir’s claim that she has not relied on Google alone for research and filming, and has in fact spent years around this issue, conducting "dozens" of interviews inside and outside Fata, may be quite true. However, there is little evidence of all this hard work in a film which depicts Waziristan beyond the mud-bricked compounds of a few homes, some mystifyingly close-up shots of a shuttered shop, some images of drone-inspired debris, a shot of some local children suggestively filmed from behind the barrel of a gun belonging presumably to a Pakistani security official, and finally, interviews with the sum total of two drone affectees.

In short, the film offers the viewer less detail, and even less nuance, than the average news report, leave aside the several other documentaries and detailed human rights’ reports released on this very issue in the last few years.

Except for the eye-catching alliteration between ‘wounds’ and ‘Waziristan’, not only does the film fail to break even relatively new ground on the drone strike issue in any meaningful way, but the narrator’s highly personalised style of narration actually serves to trivialise the profound grief of a long-suffering people.

Tahir takes off from Obama’s use of the word ‘haunt’ (in his statement about the killing of innocents in drone strikes) to highlight the neat paradoxes of life and death among Waziristanis, while the folksy strains of a rabab kick in every time a Pashtun face is about to appear on screen. The rather cloying effect of this mock-poetic narration might have been mitigated somewhat if it had been backed up with the presentation of more actual material such as further interviews with people in the area and a deeper look into their lives.

Instead, there is a heavy reliance on maps and animations, besides some rather strange requests to audience members having a soft spot for New Jersey (apparently the site of the narrator’s own childhood years) to imagine that particular US state being bombed when it was quite double the size of a little place called Waziristan. The logic of why the size of the area may be important was somewhat hard to follow here.

Bizarrely, a significant portion of the film is also devoted to quote from a colonial-era air force chief in 1924, a criticism of the film that has already been made by Wisconsin-based blogger Omar Ali on Brown Pundits. It is as if Waziristan is a land fixed in time, and its people have seen no history, no life, and no administrative experiences to relate in the long decades between the points when two different Western powers took an interest in the region.

Films with poor production values are not quite as rare as one could wish. What distinguishes Madiha Tahir’s film, though, and makes it worthy of attention, is an extremely interesting omission. The omission is not that Tahir does not discuss the Taliban in her documentary on drone strikes, for she does. Contrary to assertions that she does not discuss the Taliban because her film’s focus does not require it, Tahir herself emphasises that she does do so. No, the omission is that while talking about the Taliban in her film, she, for some mysterious reason, absolutely refuses to name them.

This peculiar tendency of the film is immediately and glaringly apparent to viewers who choose to notice. It has also been political economist S. Akbar Zaidi’s chief criticism of the film; a criticism that rebuttals so far have failed to address directly.

The word ‘Taliban’ is consistently replaced by the word ‘insurgents’ throughout the film, and this is a pattern admissive of no other generic synonyms (such as ‘militants’ or ‘terrorists’) that we may reasonably expect to hear in such contexts. A vague term ‘insurgents’ is used for the Taliban even in contexts where other actors, such as the Pakistan Army and the United States, are explicitly named instead of being just generally referred to as ‘state security forces’ and ‘a global superpower’. This could only have been a deliberate decision on the filmmaker’s part, despite Tahir’s glib, indirect attempt to dismiss the significance of her choice: "(My film does discuss) the Pakistan security establishment, the US and the insurgents -- variously known and situated through history as the mujahideen, ‘freedom fighters’, the Taliban."

Tahir’s position that there is a case for regarding the Taliban as freedom fighters is well noted, but her words leave us to wonder whether she imagines there to be no distinction between the very specific connotations of the term ‘mujahideen’ and the Taliban (in history no less!). But at least it is confirmed for us that she does not imagine the groups she vaguely refers to in her film as ‘insurgents’, and which are known to the world as the Taliban, as being separate entities.

It may be noted that Tahir’s film’s euphemistic treatment of the Taliban stands in marked contrast to another new documentary on the drone strikes issue, ‘Unmanned: America’s Drone Wars’.

Directed by Robert Greenwald and co-produced incidentally by the PTI campaigner Jemima Khan, the film presents material from "more than 70 separate interviews" with affectees and analysts to drive home the plight of drone strike victims and survivors, exploring the ethics, military efficacy, and the ground impact of such strikes in a much more nuanced manner than Tahir’s film does. It uses a range of terms to refer to the Taliban -- not only do we hear the word ‘militants’ multiple times, we also hear the word ‘Taliban’ on several occasions. What’s more, the film’s clear stance against drone strikes does not preclude the inclusion of a description of the Taliban as "these militants, these terrible men of violence".

Tahir’s film is far more grudging in its condemnation of the Taliban: "Pakistan’s security forces have killed many people here; the insurgents have too". It seems quite clear that rather than exploring the debate about drone strikes in any kind of depth (and yes, as Zaidi points out, the drone strikes issue continues to be a debate, however much anyone might wish it were a black-and-white affair; recognising that there is a debate on the issue also does not make one a ‘drone lover’, a label bandied about by some people as freely as ‘ghaddaar’, ‘surkha’, or ‘kaafir’ is by others),the firm focus of the film is to hit out at morally decrepit forces like the Pakistani state and army for collaborating with their old imperialist partner in crime, in oppressing groups that both nations had originally encouraged in taking the route of militancy decades ago.

It stands to reason that this last connection of erstwhile affection between imperialists and terrorists is one that critics of the US should continue to find intensely sexy, especially where it comes as a revelation of more recent duration. The power of a subversive-sounding declaration like "there is no bigger terrorist than Obama or Bush" also cannot be doubted, especially if the film (like numerous other films made by a new crop of Pakistani filmmakers) is to be broadcast to a US audience before any other.

‘Wounds of Waziristan’ contains sequence after sequence showing unfeeling and mercenary Pakistani security officials patrolling (and thus interfering in) a semi-autonomous region, old footage of state-sponsored militiamen in training exercises, and even a rather sinister-looking picture of Kayani hobnobbing with the US military high command.

Yet not a single image of the Taliban is inflicted on foreign audiences to give them an idea of what these ghostly insurgents, once so tenderly reared by the US and Pakistan, may now look like. This is indeed a tremendous accomplishment; an accomplishment which the makers of ‘Unmanned…’ at least cannot boast of, since they have for some unfathomable reason failed to so completely excise all images of Hakimullah Mehsud and other militants, as well as footage from the sites of Taliban bombings, from their film.

If Madiha Tahir wants to say that the real problem of Waziristan is not the Taliban, but US imperialist ambitions and the Pakistani state’s mercenary greed, then it is her right as a filmmaker to convey her own political point of view. The point is that she should not try to do so through devious means. If she believes that the Pakistani army are unjustified in their involvement in a US war (with drone strikes only being one of the many sins of this war), and that the Taliban are freedom fighters striving to defeat the oppressors which gave them life in the first place, she should say so outright, and thereby earn respect at least for her candour if not her views. We may criticise the opinions of Munawar Hassan, for example, but we can still defend his democratic right to express his own political views on our military’s actions.

Madiha Tahir should really take a page from Munawar Hassan’s book -- she should state her mind, and be prepared to take the consequences. It is quite another matter that given the Taliban’s international notoriety, if she were to appear too soft on the Taliban specifically rather than just some vague, unnamed insurgents, she may not find US television channels with liberal sensitivities quite as ready to screen her ‘documentary’.

Perhaps Tahir may already have some realisation of this.

Not prepared to give reasons for deliberately rendering the Taliban invisible in her documentary, Tahir has tried to deflect attention from this principal point of critique by attacking the ‘privilege’ of an academic who has gained recognition, not through producing materials for foreign newspapers and television channels, but through decades of pursuing research and teaching at public-sector universities in Pakistan. In doing this, she demonstrates her ignorance of Pakistani academia, and disconnectedness from its concerns and conditions.

Instead of being bold enough to clarify her politics, Tahir has reacted with outrage against charges of having sympathy for the Taliban. This is a sympathy we find today not only among Pakistanis or other Muslims who may identify with the Taliban’s religious agenda; but also among those who may have more in common with the politics of the global left than they do with the specific political orientations of the left within Pakistan, as Zaidi (himself a Marxist) has contended. The effect of this difference in class, location, and geographical orientation on political priorities and attitudes towards groups like the Taliban is reflected not only in the politics of the left. We can also see it reveal itself in other kinds of liberal politics within Pakistan itself, as I try to argue elsewhere in connection with the PTI (in the Herald magazine’s election issue 2013).

If it had been the case only that ‘Wounds of Waziristan’ (possessing as it does all the sophistication of an undergraduate summer fieldwork project, complete with personal pictures of the narrator’s own friends, family, and childhood days) was a non-serious, poorly-presented attempt at depicting the very real suffering of a troubled region, we could merely have dismissed the film as a not quite successful effort by a well-meaning, aspiring journalist. That Madiha Tahir lacks the courage to come out clearly to proclaim and defend her own convictions, unlike so many people who speak out about what they believe in and therefore suffer, seriously calls into question her credibility as a journalist.