ne of the world’s most significant rock art treasures lies between the Shatial and Raikot bridges on the Karakorum Highway in northern Pakistan. Extending over an area of more than 100 square kilometres, it is like a vast gallery of ancient rock art heritage, having more than 50,000 rock carvings and 5,000 inscriptions ranging from the 9th Century BC to the 16th Century AD. The tremendous diversity of these rock carvings provides insight into the history of people with various socio-cultural and religious backgrounds. In addition, it discloses the region’s strategic importance and trade linkages.

The ancient route of the Silk Road converged among the mighty Karakoram, Himalayas and Hindukush ranges, connecting China and Central Asia with the Indo-Pak subcontinent. For thousands of years, travellers, invaders, missionaries, merchants, pilgrims and artisans from different cultures have entered the region using the legendary Silk Road and its branches. The marks these visitors have left on this land can be seen in the region’s art, culture, knowledge and social practices. One of the most fascinating remnants of this meeting of civilisations is the ancient rock carvings found among the boulders and cliffs of the region. The sheer diversity of style and symbolism has marked this area as one of the world’s most important centres of ancient petroglyphs.

The carvings have animals, triangular human figures, Buddhist imagery and hunting scenes – where the animals are often depicted as larger than the hunters. The earliest carvings show signs of being carved with stone tools. Later, Buddhist imagery was added using sharp metal tools – a clear indicator of the development of tools and technology in the region.

In 1978, the 750 kilometres long Karakoram Highway (KKH) was inaugurated, cutting through the Himalaya and Karakoram mountain ranges to connect Pakistan and China to become the highest paved road in the world. This highway opened a new passage through hilly regions that had been a cultural melting pot for humanity for thousands of years. In 1980, a German scholar, Karl Jettmar and Pakistan’s renowned archaeologist, Professor Ahmed Hassan Dani, launched the Pak-German Archaeological Mission to the Northern Areas to systematically investigate the great wealth of ancient rock art in the region and introduce it to the world.

The earliest carvings show signs of being carved with stone tools. Later, Buddhist imagery was added using sharp metal tools – a clear indicator of the development of tools and technology in the region.

Aftab Rana, president of the Sustainable Tourism Foundation Pakistan (STFP), says that Rock art tourism is an important segment of archaeological tourism and plays a significant role in conserving cultural heritage. He says it benefits the local economy by generating income, employment opportunities for local communities and much-needed financial resources for conservation work. Unfortunately, there are many challenges to conserving and safeguarding this unique heritage. These include difficulty of accessing the sites of the carvings, lack of funding and rampant vandalism. Sustainable tourism has to be rooted in community involvement. When the local community takes ownership of this aspect of their cultural heritage, they can play a pivotal role in protecting, preserving and promoting rock art. Unfortunately, the rock carvings of the region are under serious threat from vandalism, defacement and more recently the construction of a dam. They need urgent safeguarding before this valuable cultural resource, and all the stories held within are lost forever.

Rana suggests that there is a need to take steps to minimise and mitigate the damage to the rock art sites in the Diamer Basha Dam reservoir area. In addition, effort should be made to remove selected rock carvings and to prepare 3-D digitalisation of larger rocks for display in a Rock Art Heritage Museum and Garden. There is good news that recently, the government of Gilgit-Baltistan has also announced the conversion of Chilas Fort into the Rock Art Heritage Museum. This is a very encouraging step towards conserving this tremendous cultural heritage.

To create awareness about this valuable heritage and its importance as a tourist asset, the STFP and the UNESCO-Pakistan, with the support of the Italian Agency for Development Cooperation (AICS) and Tourism Departments of Gilgit-Baltistan, have launched an initiative to promote community-based sustainable heritage tourism in Chilas. The main aim of this intervention is to create awareness and build the capacity of the local community about the need to safeguard these priceless ancient carvings and engage the local community in conservation efforts.

Responsible and sustainable tourism based around rock carvings can increase employment opportunities for local communities and financial stability, especially for the youth, by involving them in heritage entrepreneurship. Under this initiative, 26 local youth have been trained as tour guides to promote rock art tourism. Five community women have also received skills development training to design, develop and sell handmade souvenirs. The STFP is now developing various package tours, a guidebook on rock art heritage and a website to promote rock art tourism in the area. Through these interventions, an effort is being made to empower the local community to play an active role in safeguarding their cultural heritage and providing decent livelihood opportunities to the locals as a reward for their active participation in conservation efforts.

The writer is a staff reporter. He can be reached at shahzada.irfan@gmail.com 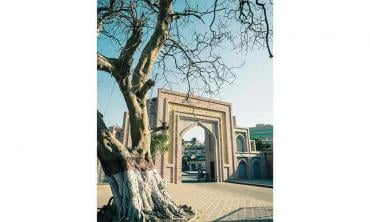