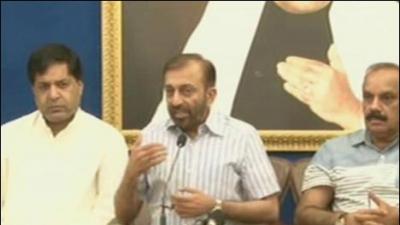 KARACHI: Muttahida Qaumi Movement (MQM) leader Dr Farooq Sattar has said that DG Rangers Major Gen Bilal Akbar had not named his party in the report presented before the Sindh Apex Committee a week ago.

He said, in the report presented before the apex committee, DG Rangers had alleged different political and religious parties without naming them, however, media trial of only MQM has begun following this briefing.

He went on to say that MQM had been blamed for more than 25 years, but even the courts have rejected such allegations. He said propaganda was carried out ahead of NA-246 by elections and the party’s mandate was attributed to ‘stamps’ (Poll Rigging), however, MQM achieved a big margin.

He said presenting apex committee’s report before media on the occasion of MQM’s founding day aimed at media trial of the party.

A briefing by the DG Rangers told the Sindh Apex Committee meeting that millions of rupees are distributed amongst gang-war factions in Karachi.

According to a press release, DG Rangers Maj Gen Bilal Akbar gave a detailed briefing to the Apex Committee meeting regarding the Karachi situation.

The DG Rangers revealed that over Rs.230 billion is collected illegally in Karachi annually.

The briefing went on to say that this money is used for the purchase of arms and ammunition.

It was also noted that money is coerced out in the form of alms for the same purpose.

The briefing further said that most crime is committed by a large party in Karachi.

The DG Rangers went on to say that a large part of illegal businesses in the city is the distribution system of water which also involved illegal means of making money in millions of rupees.

The briefing also noted that the money made from sale of sacrificial animal hides is used for funding terrorist activities.

Regarding land grabbing in Karachi, the DG Rangers said that political parties, the City Government, District Administration, and police personnel are all involved in the activity.

He added that the amount made from land-grabbing is used by political and religious parties to operate their armed wings.

He went on to say that there are three types of land-grabbing being carried out in the metropolis including grabbing of government land and property as well as grabbing of private property.

The DG Rangers added that the funds from the mentioned activities are used for gang-warfare amongst factions in Lyari as well as other areas of the city and also distributed amongst some important dignitaries in Sindh.