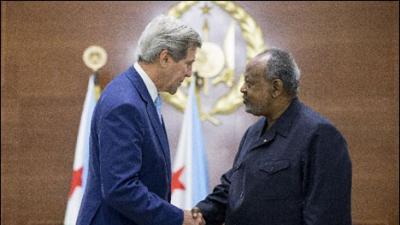 RIYADH: Top US diplomat John Kerry flew in to Riyadh Wednesday for talks on a "humanitarian pause" in Yemen, where dozens of people were reported killed trying to flee worsening conditions after weeks of war.

On the Saudi side of the border there were more casualties as well, when shelling from Yemen killed five people, the civil defence agency said.

Riyadh has said it is considering temporary halts in air raids to allow aid deliveries into Yemen, where a Saudi-led coalition took action on March 26 to halt an advance by Iran-backed rebels.

Twenty-two humanitarian organisations warned their emergency aid operations in Yemen could cease because of fuel shortages, and urged an immediate opening of roads as well as an end to the coalition´s air and sea blockades.

There has also been growing concern for civilians in the war.On Wednesday, 32 people were reported to have died while trying to flee the southern city of Aden by sea.

A health official accused the Huthi Shiite rebels of killing the civilians and wounding another 67 in the shelling of a fishing harbour and a barge.

Before he travelled to Saudi Arabia, Kerry told reporters in Djibouti he would raise the issue of a temporary halt to air strikes with officials in Riyadh.

"We will be discussing the nature of the pause and how it might be implemented," said Kerry, who Wednesday night held talks with Saudi Crown Prince Mohammed bin Nayef and was to meet King Salman on Thursday.